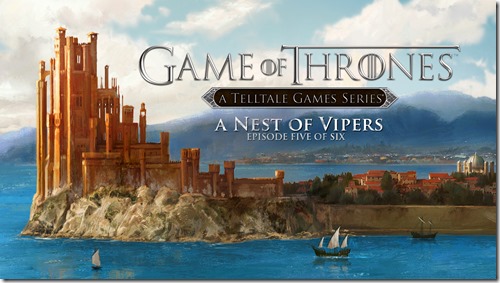 Game of Thrones: Episode 5 – A Nest of Vipers is the penultimate episode of a six-part episodic adventure game series from Telltale Games, creators of The Wolf Among Us and Tales from the Borderlands. In Episode 5, each member of House Forrester must yet again make difficult decisions vital to the survival of their house. The line between right and wrong is continuing to blur – what will you do to survive?

A Nest of Vipers is the shortest Game of Thrones: A Telltale Games Series episode released so far, clocking in at about 90 minutes. Its brevity isn’t necessarily a bad thing: it allows the story being told to move along at a fast clip well-suited to the tense drama unfolding, even if much of the action is left until the second half of the episode. However, most Telltale Games series are only five episodes long, making A Nest of Vipers somewhat of a curio.

In truth, it does occasionally feel like padding to prolong the experience until the finale arrives. This is most apparent beyond the wall, where Gared spends a lot of time talking about going to The North Grove, but never actually seems to travel much further – if at all – from where he was last seen in Episode 4. Meanwhile at King’s Landing, Mira gets to hang out with some familiar faces from the television show. It’s a double-edged sword – Cersei and Tyrion are no doubt fantastic characters, but since we know what happens to them in the future of the Game of Thrones universe, their scenes often feel like unnecessary stalling. 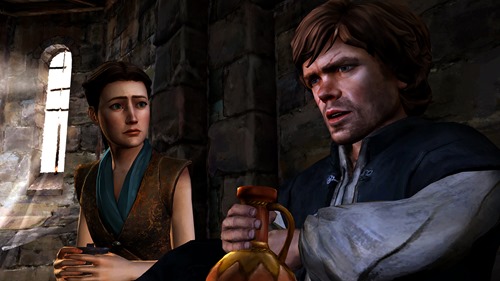 It’s when the episode focuses on its more interesting and wholly unique characters that it truly shines. Asher (voiced by Alex Jordan) still desperately needs to secure an army so he can return home and save his family. He is left with no choice but to face up against bloodthirsty Meereen pit-fighters, beat one of their own in the fighting pit and try to recruit them afterwards for his cause. The Game of Thrones television show always does a fantastic job of making the world feel dangerous – likewise, Asher and Beskha entering the den of the Meereenese pit fighters is a truly intimidating scene that builds up beautifully and culminates in a brilliant action sequence.

On the home front, Lord Rodrik Forrester is still suffering and fighting for the survival of his house, first having to deal with the psychotic Ramsay Snow – again, we know nothing can actually happen to Ramsay because of the television show, which somewhat lets the wind out of this particular scenario’s sails – before uncovering a betrayal that could seal the fate of his house forever. Rodrik (voiced by Russ Bain) continues to be the strongest character despite being continually downtrodden and it’s wonderful to see him struggling to keep himself and everyone else going despite the hopelessness that continues to pile up.

Game of Thrones: Episode 5 – A Nest of Vipers isn’t a terrible episode by any stretch of the imagination, but it does feel like the extra episode in a series that didn’t really need one. The decisions thrown at players are as difficult to make as always, but their outcomes seem far more rigid than usual. It doesn’t help that the concurrently running Tales from the Borderlands is blazing an envious trail, continuing to surprise and delight with each new episode released.

However, not all is lost. The ending of A Nest of Vipers is superb, with time slowing down – both figuratively and literally, in-game – as the fate of the house is potentially sealed for good with the series’ most difficult please-don’t-make-me-decide decision to date. It’s a memorable gaming moment that offers hope, if not for House Forrester, then for the sixth and final episode – The Ice Dragon.