INTERVIEW – In Conversation With Andreas Diktyopoulos (The Minims – A New Beginning, beyondthosehills studio)

Alternative Magazine Online recently reviewed iOS point-and-click adventure game The Minims – A New Beginning, describing it as “a truly lovely and lovingly made experience that asks you to embark on a journey into the unknown and will leave you with a warm smile upon your face once the final destination is reached.” It is therefore with great pleasure that AMO presents an exclusive online interview with game developer Andreas Diktyopoulos from beyondthosehills studio!

Hi Andreas, thank you for your time and welcome to Alternative Magazine Online!

Thank you for having me and for your review.

Can you tell AMO’s readers a little bit about yourself please?

I was always interested in storytelling, arts and new technologies so from a very early age I was involved in video games. My first PC was an Intel 80286 and at the age of 15 I was learning programming with C language. After school I studied computer science, classical and electroacoustic music composition and foundations of mathematics.

Since 2005 I have been involved in the contemporary music & art scene, composing instrumental and electroacoustic music and participating in several art events having the co-direction of a contemporary art space in Athens, Greece.

Finally, in the year 2011 I decided to fulfil one of my childhood desires: creating video games, or interactive stories if you like. There were 3 main reasons that make me make that decision at that time. The first one was my discovery of the Unity Engine. The second one was the launch of the iPhone and the third one… it’s complicated. The development of The Minims began in 2012 and it is my first major game title.

When, where and how was beyondthosehills conceived? Is there any particular meaning behind the studio name?

A typical morning in March 2011, I came in the office and said “Let’s start making video games!” There was an office in downtown Athens/Greece at the cultural space ABOUT: which my wife Maria and I had founded in 2010. We have organized over 100 cultural events over the years, such as contemporary-classical music concerts, contemporary art exhibitions, lectures and workshops.

We had a different name at first, which was too encrypted and difficult to remember, too difficult to say even! At the very moment we finished the first major update of The Minims, we knew that we had to change the name and rebrand our team. The name “beyondthosehills” was conceived as a reference to stories’ opening sentences, as a symbol of beginnings of narrations in general…

I grew up in the countryside with my brother and every summer we would explore the whole area around our home. Exploring, and discovering what was beyond those hills kept fascinating me as a child. It was like a private journey which somehow concealed another basic concept which I was always fascinated by as well: infinity. Behind a hill there is another hill and so on… 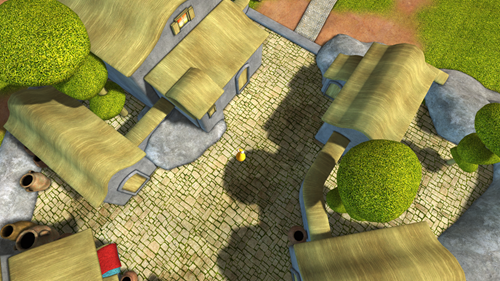 Congratulations on the recent release of The Minims – A New Beginning! What’s the game all about?

The Minims is a game about a personal journey of an endearing creature of the Minim species. In the game, the player must use logic, collect important items, and solve puzzles in order to guide Mii in his search to find his life partner Mo. Tracing her steps, he embarks on a journey which becomes a self-seeking exploration regarding life choices and personal values. With its imaginative artwork, its compelling story and its relaxing tempo, it introduces the player to a quirky and serene universe.

There were several pilot versions released before the final game hit the App Store – what was the reason behind this?

Well, this was not necessarily intentional. As we hadn’t had any previous experience in launching a commercial product prior to that point, we thought that it was a good idea to test the game at an early stage. And so we did! But as the project was maturing, so were we. Gradually, we realised that it had been too early a stage perhaps. So we decided to release 3 major updates, in stages (v3.0, v3.1, v3.2 – we have skipped v2.0), which led to the complete version.

How did the game change between the original release and the new (final?) version, A New Beginning?

It has changed a lot! Actually we could say that it is a quite different game as far as the graphics, music, puzzles, the user interface and the overall feeling are concerned. The only things we kept from the early versions were the main story (and backstory), the characters and the topology of the world.

Why did you decide to release the game specifically for Apple devices?

The game was firstly designed for mobile devices, especially for tablets. So the first platform we wanted to hit was the App Store. We are planning to launch it on more platforms starting from Windows, Mac and Linux. In the long-term we want the game to be playable by as many people as possible and we aim to be on any platform that fits the design of the game.

Will there ever be a console or PC version of the game?

At this moment we have a fully playable build of the game for PC [Windows/Mac]. Nevertheless we would like to add more features for the released PC version, such as graphic improvements and visual FX, so we have some work to do before it is released. The main plan is to hit Steam Greenlight within the next months.

What is the technology that powers the game?

The game was made with Unity and we were extremely happy when Unity recently added our game to their showcase gallery. Even if most people may believe that Unity offers a lot of out of the box solutions for game developers, most professional game developers would agree that in order to achieve a specific result, there are a lot of custom-made features you have to develop. So do I.

For the graphics part, I mainly used Lightwave. I know… not a common solution for game productions, but actually I’m very familiar with it since I have been using it for many years now, so it was the obvious choice for my workflow. Nevertheless I think it’s a great 3D software, but I fully understand why it’s not preferred by the game production industry. 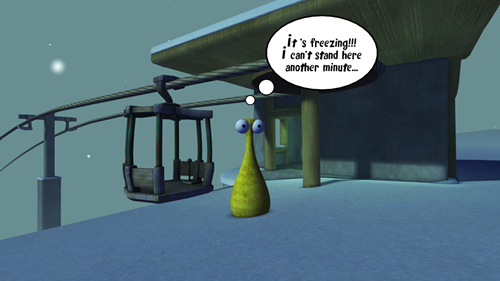 What is a Minim?

Minim is the singular of Minims, which is a species of creatures in the world I have created. It is not the main species of that world but it’s definitely the main species in our story. The characteristic of these creatures is their minimally shaped curvy body with a pair of eyes. So we decided to call them Minims as an abbreviation from the word minimal.

When our story starts the player sees only the main Minim character of the game, Mii, who tries to find his beloved Minim wife Mo. In the intro, we clarify that these are the only Minims left in this world, or so they believe…

Actually we have a whole background story about the Minims and the world they exist in, which we would be grateful to exploit if a future opportunity arises.

The storyline feels deceptively simple at first but eventually deals with some pretty interesting themes. Did you want to leave some interpretation of Mii’s journey up to each individual player or is there a definitive explanation for the events that occur?

The story I have in mind is very specific. The events that occur have been designed and meticulously placed in a specific space-time frame. But there are a lot of things that we don’t clarify or reveal to the player. For example, we don’t say much about the story of Mo, or who the Elder-Minim is, nor what his particular role in the story and the lives of the Minims is. And of course there is the “Intermission”!

At this point I would like to clarify that my intention is not to define what is right or wrong or what someone has to do with his life. I just present the story of the characters I have created. This is the story of Mii. So when you have to choose to follow the path, you don’t choose for yourself. You choose on the behalf of Mii. It’s a predestined story.

Nevertheless, there will always be room for free interpretation on an abstract level about Mii’s journey that each individual player can make. 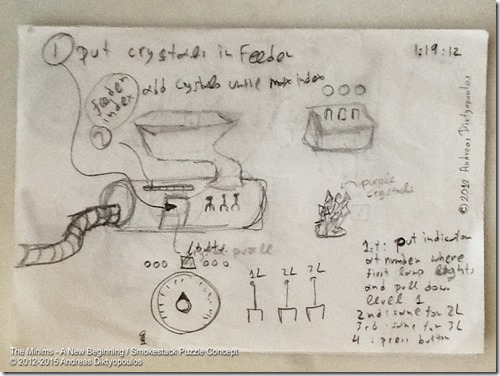 What’s your favourite moment in the game?

That’s a tough question! You know, I see the game as a whole and it’s very difficult for me to distinguish a moment. The only thing I can say is that I’m really proud of the last chapter – which is the most recent chapter I have developed.

Is it hard making a game with such a small team?

Is hard to make games such as The Minims in general. Our team is really small. I am the only developer, CG artist and sound designer, Maria participates in the game design and composes the music and our friend Akis conducts the testing which is a very significant part of the developing cycle. The game design was mostly made by me and Maria. We can actually say that the game was an effort of a single developer, a thing that most people who play our game don’t realise. And yes… it’s very hard.

Who composed the game’s music?

The music was composed by my wife and co-founder of the studio Maria Aloupi. She is a professional composer and a classical pianist among other things. This is the first time she composed music for a game and she had to learn a lot about working with interactivity. Maria had to re-score the entire game for our first major update (version 3.0) as we changed the game a lot.

Would you like to revisit this world in the future, perhaps with a sequel?

As I have mentioned before, it would be great if we had this opportunity. We have a strong background story for the world and for each individual character that we would definitely like to exploit. After all, the subtitle “A New Beginning” indicates that there is more to come and amazing things will happen in the world of Minims. 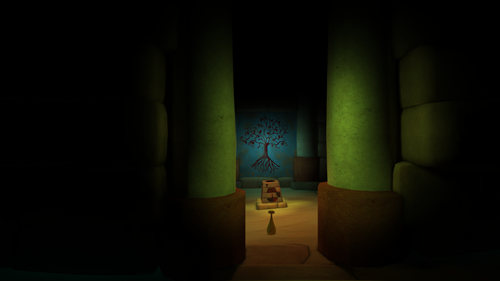 What’s next for beyondthosehills studio?

We are currently working on a few new prototypes simultaneously. We have just started sorting out our most viable prototypes. We are probably going to announce a new game title around the end of Q3 – beginning of Q4 2015.

Thank you for your time! I really enjoyed playing The Minims – A New Beginning and I’ll look forward to seeing what you do next!

It was a pleasure and a great opportunity to reveal more about the game.