GAME REVIEW – The Journey Down: Chapter One (iPhone) 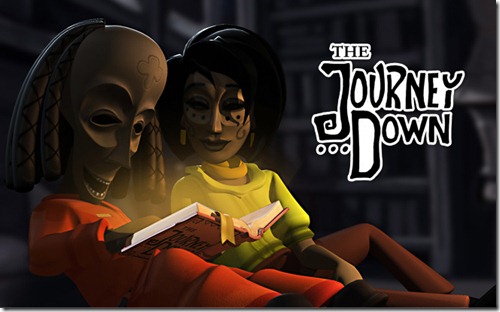 Alternative Magazine Online reviewed The Journey Down: Chapter One – HD (PC) in 2012, describing it as “one of the most essential adventure gaming experiences of the past few years.” Players take control of Bwana, a gas-station owner in a stylised world where everyone has a face like an African mask, as he tries to uncover a sinister plot involving the Armando Power Company and his long-missing father. A port of The Journey Down: Chapter One was recently released on the Apple App Store, offering players the chance to play this fantastic indie point-and-click adventure game on iPad, iPhone and iPod touch.

The Journey Down: Chapter One on iPhone is essentially the same fantastic game that graced personal computers back in May 2012, which was itself a remake of a freeware indie point-and-click adventure game called The Journey Down: Over The Edge. As Bwana, the player must help a woman named Lina who turns up looking for a mysterious book, and (often unwittingly) help her to uncover the truth about what lies beyond the edge of the world…

Reminiscent of a classic LucasArts adventure game, The Journey Down: Chapter One tasks the player with fixing Bwana’s plane with the help of his lifelong friend Kito. Lina promises to pay Bwana handsomely if he can fly her to an as yet undisclosed destination, which would go a long way toward paying off the bills he owes to the Armando Power Company. 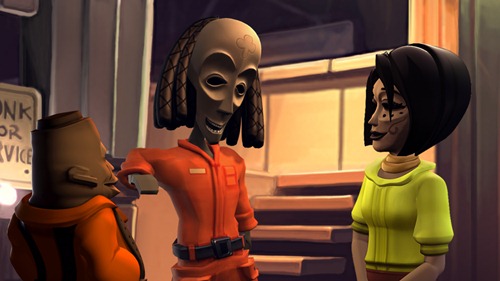 The puzzles are all logical and well thought out – adventure gamers have seen this gameplay a million times before of course, but something about The Journey Down makes it seem just that little bit more special. Perhaps it’s the gorgeous graphics, uniquely stylised in a way reminiscent of the classic LucasArts adventure game Grim Fandango? Or perhaps it’s the jazzy, laid-back soundtrack by Simon De Souza, which is already arguably one of the most memorable adventure game soundtracks ever composed? Or maybe it’s the wonderful performances of Anthony Sardinha as Bwana, David Dixon as Kito and Cassie Ewulu as Lina.

Whatever the reason(s), The Journey Down simply exudes charm and class. So many commercial video games fail to fully realise a world – SkyGoblin makes it seem easy. The translation to touchscreens seems similarly effortless. Holding down a finger and moving it around the screen reveals labelled hotspots surrounded by rippling circles of while light. They even play musical notes, which evoke the notes of the main theme – a lovely touch! Interaction is as simple as tapping a hotspot. Inventory items can be used on hotspots by dragging and dropping them. Simple!

The only difference between this port and the original release, apart from the new touchscreen interface, is that some of the dialogue has been re-recorded. In AMO’s original review of the PC version, it was noted that “unfortunately sometimes the recording quality can vary – the yacht concierge for example sounds a little bit tinny.” This is no longer a problem in the iOS version – the yacht concierge sounds crystal clear in all his snooty, snotty glory.

The Journey Down: Chapter One is a fantastic game regardless of which platform you experience it on – and adventure gamers, experience it you must. Yet surprisingly, playing the game on iPhone (or indeed iPad) may actually have a slight edge over the PC version. The touchscreen interface is flawless and the smaller screen makes the beautiful HD graphics look even sharper. In short, this is a port that never feels like one, as all good ports should be. For newcomers and players already familiar with The Journey Down, playing the iPhone version in the palm of your hand is one of the most enjoyable and refreshing modern adventure gaming experiences money can buy. It’s still a bit on the short side, but please don’t let that put you off… get playing (or replaying) and then wait impatiently with excitement for Chapter Two!