Something felt different in the months before the release of Fable III. The promises from the Peter Molyneux felt muted in comparison to the grandiose features that failed to make it into the first two games. Perhaps he’s wise to the reputation he’s gaining, the man who promises much but delivers little, his games rarely living up the levels of hype that he creates. There’s no denying that both Fable games thus far have been wonderful adventures, but since then Fallout 3 has re-written the rules of the modern RPG. The promises made for Fable III sounded believable, but do they finally amount to the game we’ve been waiting on for six years? 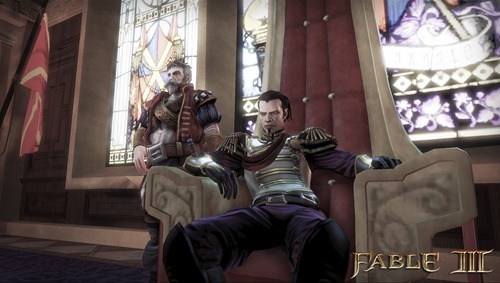 Well yes and no. The big draw this time around was the much vaunted road to becoming Monarch of Albion. Through forging relationships and gaining followers, you lead a revolution on the way to usurp the throne. Of course, it amounts to little more than completing plot quests and earning enough ‘followers’ to hit the appropriate target and push the story forward. Followers are gained through completing quests and building relationships: a mundane series of holding down an emote button a few times, and little more. These followers also act as a currency and can be spent on weapon, emote and cosmetic upgrades on the road to rule, forming an interactive levelling up system.

Up until the point of becoming Monarch, it’s standard Fable fare. The chunky combat is simplistic, the villagers all have Birmingham accents, sexual promiscuity is still present and you can spend all your time running a business empire. Pausing the game now takes you to the Sanctuary, your corner of the world that houses your weapons, clothing, achievements and riches. As well as housing a map for quick travel, the Sanctuary also allows you to connect to other games of Fable III, allowing you to fight alongside complete strangers on Xbox Live. I did happen upon a player whose character was naked, trying to lure a male prostitute into a wooden hut one evening. That was a difficult one to explain when my girlfriend walked in.

Weapons change according to your actions. To an extent. During a ‘good’ playthrough, my weapon adopted a golden glow to signify my monetary success, a blue hilt due to my friendly nature and an inexplicable skull. My ‘bad’ playthrough saw me slaughtering a village at the first available opportunity, and my weapon again adopted the same golden glow, blue hilt and skull. It’s interesting in its potential, but the execution is poor. Further experimentation may be needed to yield different results, but from playing from both ends of the moral spectrum it’s difficult to see how else results could change. Other weapons can be levelled up by fulfilling certain criteria, such as killing 150 enemies at night, or making 30 friends. As any RPG fan will tell you, repetition does not a fun game make, especially when building relationships is as mind numbingly dull as it is here.

In an attempt to heighten emotional investment, the emote system now includes the ability to hold hands. How terribly exciting. Being able to lead anyone willing to follow anywhere does help with any nefarious murdering you may be plotting but it simply boils down to you hammering the left trigger until the game decides it wants you to hold hands again. This is particularly frustrating when your companion gets stuck behind a box on the street and you have to go through the process again, replacing any emotional investment with a few seconds of shouting unmentionables at the screen. 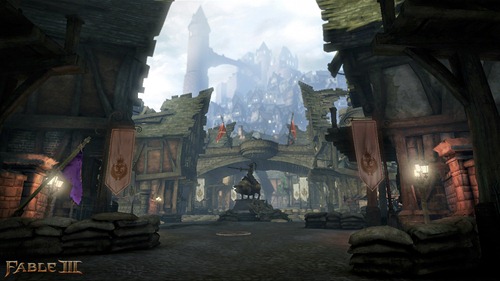 Becoming King (or Queen) is the first time you will see anything truly new to the series (considering 95% of the enemies you fight up until this point are all series regulars and new monsters display an alarming lack of originality). You genuinely have to make some difficult decisions, and this does well to gloss over a pretty dreadful story. The effects of your decisions are seen throughout the world, and for the first time you will feel as if you are making a dent on Albion.

Yet it’s little more than pressing a button and the world magically adapting to your decision, and the process is still a long way off from having a physical impact on your surroundings. However, when your actions do have farther reaching consequences it’s great: there’s an undeniable inkling of guilt as you decide to funnel sewage into a village. It’s an enjoyable second half to the game, marred only by a truly dreadful final boss. 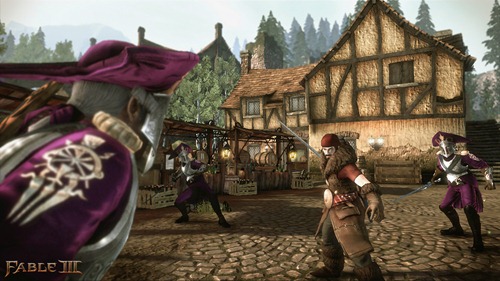 Considering how much hyperbole Peter Molyneux talks about revolutionising gaming with each new release, the Fable III engine is privy to some of the worst slowdown I’ve encountered on the Xbox 360, grinding to a halt on occasion even when simply walking around a town. Some vistas are quite handsome, and the steam punk aesthetics of Bowerstone are wonderful but technically it’s appalling. The entire experience as a whole feels lazy, a feeling not helped by previous – if minor – features now missing from the game unless you are willing to pay extra for the DLC, such as the Arena.

Before diverting your eyes to the bottom of the page, I feel it’s important to declare my love for the Fable series as a whole, with the original being one of my favourite titles on the original Xbox. If you are willing to put in the hours, and overlook it’s faults, Fable III can turn into a sublime, rewarding adventure. Considering the timing of its release however, and the titles that have come long before, it’s bewildering that Lionhead haven’t done more with it. Should they decide to work on a fourth instalment, it’s imperative that it’s built from the ground up as the Guildford studio are currently trailing far behind Bioware and Bethesda in the RPG-adventure stakes.