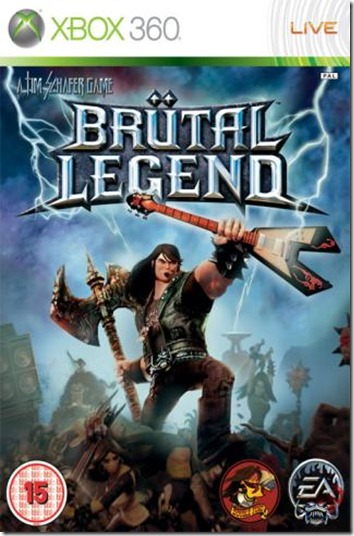 If there are two things I love in this world (other than a good cup of tea and jammy dodgers), it would be video games and rock music. Throw the two together, put Tim Schafer in the rhythm section, Jack Black as your front man and a whole host of metal legends as your backing band and what do you get? The metal opus that is Brutal Legend, that’s what! But the question is… does it rock?

Brutal Legend (released October of last year) is the massively hyped action adventure from legendary developer Tim Schafer and his team at Double Fine. And why wouldn’t it be? It’s the studio’s first release since ‘Psychonauts’ in 2005 and boasts the vocal talents of such actors as Jack Black, Tim Curry and David Cross.

The game is essentially a celebration of all things heavy metal, including face melting guitar solos and numerous references that, although humorous, will likely only register with metal fans. There are over 100 metal songs in the game’s soundtrack and rock legends such as Lemmy, Ozzy Osbourne, Rob Halford and Lita Ford all make cameo appearances throughout (it has also been reported that the recently deceased Ronnie James Dio recorded the original dialogue for the Doviculus character). If you’re a metal fan or even just an appreciative rock fan you’ll get a kick out of the game for sure – that is, if this paragraph hasn’t caused the word ‘metal’ to lose all meaning to you.

You control Eddie Riggs (voiced by Jack Black – we can all agree he rocks, right?), an old school roadie for a pop rock band, yearning for the older days of metal. After an onstage accident, Riggs finds himself in an alternate parallel universe. A universe built on rock folklore and not at all dissimilar from the artwork you’d find brandishing an Iron Maiden LP. There, he becomes the leader of a revolt aiming to take back the land and overthrow the evil demon tyrant Doviculus. It’s a metalhead’s paradise. But does it rock?

Well yes and no. The game has everything really, action, adventure, driving, rock music, humour, strategy, awesome weapons, and even a bit of romance. A lot to love… and a lot to hate?

My initial impressions of the game were very good. I loved the humour and I was instantly taken in by the setting. I particularly liked Rigg’s weapons, an axe which can be used to do… well, axe stuff, and an enchanted ‘Flying V’ guitar, which allows you to shoot lightning and fire at enemies. You can also perform magic guitar solos, which you learn throughout the game. These have various uses, such as summoning your car Deuce (the druid plow, and possibly the coolest looking car in any game) or even just melting the faces of surrounding enemies, which never gets old. This can come in very handy during larger battles.

After a lengthy opening cut scene the game gets right to it, throwing you straight into a fast paced explosion of action and humour, whilst doing a fairly good job of teaching you the ropes in the process. You are instantly slaying demons, double teaming with allies and even fighting a behemoth boss – all within the opening sequences of the game. It’s frantic action with a lot of laughs and it really is brilliant. It’s definitely a unique gaming experience and best of all it doesn’t take itself too seriously.

Then… the game slows down, and it never really lives up to the expectations that the opening creates. The humour is still very prominent and the main story and characters are still interesting and gripping. In fact, for all the humour and quirkiness, I was actually taken back by just how epic and serious the main story is. There is actually a bit of depth and substance to it, with a lot of characters sprinkled throughout, some of which sadly get lost in the shuffle. But the game itself never really takes that next step to compliment the story and the explosive opening.

Riggs himself is a great protagonist and if I’m honest it feels like Jack Black is really just playing himself (Eddie even resembles him  – in the face I mean, Black would obviously kill for Rigg’s buff body). He’s a roadie who is prepared to do the dirty work, but from within the shadows where he is most comfortable, getting his kicks from making everyone else look good. This is something he stays true to, even in the alternate dimension and as the leader of his own army. His soldiers range from headbangers, bass players (used as medics), roadies, groupies (with guns) and even primitive types with Kiss makeup. The enemies range from beasts and demons to glam rockers and ’emos’.

The world itself is a sandbox environment in which you are given the option to roam throughout a fairly decent sized map. You can either play the primary story missions or partake in secondary side missions. If you play through the main story alone however you will likely find yourself disappointed by how short the game is. 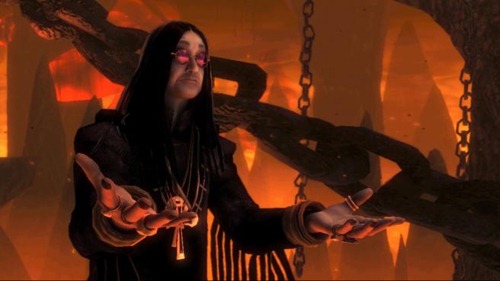 The secondary missions vary. From races to ambush gang battles, to shooting targets and hunting challenges, they do a good job of mixing up various game modes. These missions exist obviously to add more depth to the game and some respite from the main story. Each successful mission also earns you ‘fire tributes’, which is the game’s currency and can be spent at motor forges (fittingly run by Ozzy Osbourne) to upgrade either your weapons or car.

At first these secondary missions are a lot of fun, especially fighting alongside your gang of headbangers. However, they lack variation – there are only so many times you can ‘ride the death rack.’ There are a few stand-alone missions, which are fun, but they are few and far between.

The world itself, although picturesque in many areas, becomes slightly repetitive and samey. This would be forgiven if you didn’t find yourself spending large chunks of the game driving from one end of the map to the other. The achievement and the completion junkies will be right at home however, with a lot of gamer score fodder hidden throughout the map. These include bound serpents waiting to be freed, relics to be raised and story viewers which take you on a brief journey into the world’s back story. Finding these often leads to special gifts, music and guitar solos, but there are so many that I basically gave up with them halfway through the game. But if you want 100% on the stat screen then you’ve got a lot to play with here. Collectors will also love the added storyboards and concept art which can be unlocked.

Surprisingly there is also an element of strategy within the game in the form of ‘stage battles’. This is the real backbone of the game and you know you’re onto something big when it’s time for one of these. To sum it up, it’s quite like ‘Command and Conquer’, leading your army into battle by directing them either in groups or together to take down the enemy. The biggest difference being that instead of seeing the battle from the sky (which you can, because Riggs somehow sprouts wings before each battle) you are able to enter the battle yourself. Thankfully your troops won’t just stand around if an enemy is in sight either.

These battles are in a word, crazy, and playing them like a ‘C&C’ strategy game will only get you so far. Although they take a while to master, they can be a lot of fun. They can go on a little long though and sometimes I wasn’t even sure what the aim was, which is mainly due to a lack of direction. Thankfully, these  battles really come to life when playing them online with other players, a nice element which extends the life of the game.

The gaming mechanics aren’t anything new, yet the special moves via guitar soloing is a very nice and original touch. You won’t have much trouble getting to grips with any of the controls, although like 99% of games of this ilk, the camera can be a real pain when moving your character. Driving is simple too, although the car often gets stuck easily and even the slightest push on the control stick will send it into a spin or worse, stuck in a gravity defying vertical position.

Fighting isn’t too challenging. Holding the left trigger allows you to easily lock onto an enemy, even if it isn’t always the enemy you want to aim for. Each troop member also has a unique ‘double team’ move, which can be a lot of fun to use. You can even ride some of the wildlife to trample the enemy!

What I found most bizarre about the controls was the lack of a ‘jump’ button. Rigg’s often jumps at the end of a combo, so it’s not like it had anything to do with the character. Sometimes I found myself stuck or sliding down the side of a mountain, something that would have been easy to avoid if we were able to jump. This doesn’t cause too much of a headache and even if it causes an accidental death every now and then, the game auto saves often. Besides, you can’t really die or fail anyway. If you’re in the middle of a mission you will just keep ‘respawning’, so these little niggles are only a minor complaint if anything.

The game itself is well, brutal, with a lot of heavy language and gore, which is slightly strange at first as it juxtaposes with the rather cartoonish looking graphics. This actually adds to the humour and the parents shouldn’t worry too much as there is a censor option (although it’s a ’15’ certificate, so why would your kids be playing it anyway hmm?) The graphics, although cartoony (which adds to the charm of the game) are terrific, the characters look clean and sharp and the facial expressions never ceased to crack me up. Some glitches are more than a little bit noticeable, although you won’t mind in the end.

All in all, the game is a unique experience with enough to keep you busy and includes an element for every type of gamer. The main story although quite short, still feels epic and stays just intriguing enough to keep you interested, even if the last third does seem slightly rushed. The humour will make you laugh out loud (although it dies down as you progress) and the voice acting is top notch. There is also enough metal music and references to keep even the Osbournes happy.

However, the best of the game is within the very early stages and doesn’t ever really take off as much as I felt it could have. It gets very repetitive in almost every area and it doesn’t really fulfil its potential. It’s also not much of a challenge either, especially when it comes to the secondary missions.

Brutal Legend isn’t perfect, but it is still a very fun game to play, even if it does need some extended breaks to truly be enjoyed. The hidden secrets and the multiplayer aspects will also keep you coming back after the main story. Tim Schafer fans should enjoy Brutal Legend as, much like his other titles, it doesn’t take itself too seriously. Follow suit, and you’ll probably get a kick out of Eddie Rigg’s epic heavy metal adventure while it lasts.