Winter In Wartime is a Dutch film from 2008, directed by Martin Koolhoven and based on the novel of the same name by Jan Terlouw. A huge success in the Netherlands (where it even out-grossed The Dark Knight) it was most recently featured at the Academy Awards, where it was shortlisted (alongside 8 other movies) in the section for Best Foreign Language Film. Winter In Wartime is finally getting a DVD/Blu-ray release in the United Kingdom this month. The wait has been worthwhile.

Winter In Wartime is a special and unique film because it mostly takes the form of a celluloid chameleon. Please allow me to elaborate. Aside from the powerful opening where British RAF pilot Jack (played by Jamie Campbell Bower, who British audiences may recognise as Caius from Twilight: New Moon) crash lands in a small Dutch village, the majority of the film feels decidedly art house in direction and tone. The chameleon aspect of the film is brought forth via its ability to often sharply change direction without ever damaging the narrative as a whole. Director Marin Koolhoven weaves this many-faceted tale beautifully.

Young male lead Martijn Lakemeier is a revelation as Michiel van Beusekom. This is undoubtedly his film and he quite frankly out acts everyone on screen. As a young boy struggling to deal with the Nazi occupation of his village and his father’s complicit co-operation with them as mayor, he constantly hints at an underlying, simmering anger that is powerful in both its reserve and authenticity. Whereas the story could potentially appear nonsensical in lesser hands, we truly believe here that Michiel is strong enough of character to not only help the stranded RAF pilot, but become actively involved in the plot to transport him to safety.

That is not to say that supporting characters are badly acted, although different parts are played with varying degrees of success. The strongest supporting actor by far is Yorick van Wageninen as resistance fighter uncle Ben: his relationship with young Michiel, who initially worships him as a hero, is sensibly focused on even as their ties become frayed and strained. They have a great chemistry together on screen and it seems fitting that some of the film’s most powerful moments feature them both. In direct contrast to Michiel’s relationship with his own father, his relationship with uncle Ben becomes all the more intriguing and powerful as it unfolds onscreen. Sadly, the Nazis are as usual in cinema nothing more than evil window-dressing, but at least this time it isn’t too over the top.

Controversially, the most well-known face to us Brits will be Jamie Campbell Bower as RAF pilot Jack, yet his acting is largely a game of two halves. As one of the few English-speaking parts in the film (the rest of the actors are subtitled) his delivery can often feel strangely devoid of conviction early on. Later, his inevitable dash for freedom with Michiel shows his true range as an actor: there is one gut-wrenching moment where he demands they pause, paranoid, gun drawn as he looks out over a nearby river… but to speak more of this would be to spoil one of the film’s greatest moments. I guess I am trying to convey the fact that Bower isn’t necessarily bad in the film. Rather, he is inconsistent and outshone by newcomer Martijn Lakemeier as Michiel. Therefore, the fact that the film isn’t really about the pilot at all, as could be initially thought, is a blessing in disguise. 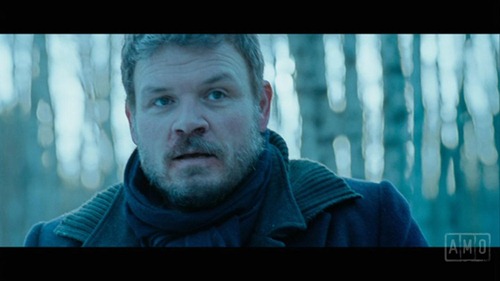 Aesthetically, Winter In Wartime is very solid, set in a beautiful landscape draped in snow that lends itself well to the desperation of the protagonist’s mission. I wouldn’t go as far as to say the direction is anything revolutionary, but then I don’t think fancy camera work would have added much to the drama anyway. One moment, shot in slow motion, should feel cheesy but is surprisingly powerful, a marriage of visuals and non-diegetic sound that culminates in a devastating outcome for Michiel and his family. Italian composer Pino Donaggio, whose first feature film was Don’t Look Now and who has also worked extensively in the past with Brian De Palma, provides a score that complements the visuals without ever overwhelming them. It is a beautiful accompaniment, that sadly only falters when it fills silent moments that should have been left well enough alone.

Yet the greatest joy of this coming of age drama is that chameleon-like aspect that I mentioned at the beginning of this review. On the face of it, this isn’t the type of film that you would expect to successfully combine genuine sentimentality and bombastic blockbuster-style thrills in its final moments, yet it manages to do just that with seemingly minimal effort. There is no greater pleasure to be had when watching Winter In Wartime than realising there have been rational twists and turns all along the way: but you still won’t see the ending coming. Powerful in the simplicity of its execution yet complex enough to leave you thinking long after the credits roll, the pros available here far outweigh the cons: not quite consistent enough to be considered a masterpiece then, but close enough to warrant a strong recommendation nonetheless.

Winter In Wartime is available on DVD and Blu-ray in the UK from the 31st May 2010.