Gaming droughts, rain, tennis, annoying cider adverts, sweating to death on the London Underground. British summers leave a lot to be desired but thankfully Microsoft, with its much-vaunted ‘Summer of Arcade’ made this year a bit different from the norm. Five games released over the course of the summer at a price of 1200 MS points, at admittedly varying quality – I’m looking at you Turtles in Time – but with this scheme Microsoft has offered gamers an excellent selection of games during the slow summer months, championed digital distribution and once again solidified Xbox Live as the premier online console service.

One of the standout games from not only the summer, but possibly the year is the wonderfully titled ‘Splosion Man, from Twisted Pixel, creators of the well received The Maw. On paper, it is a typical platformer, with the task of making your way to the end of the level in as quick a time as possible. Sound familiar? Fear not, you will have never played anything like this before!

As the titular ‘Splosion Man, a glowing yellow/ orange humanoid with a twinge of tourettes and the ability to explode (hence the name ‘Splosion Man…get it!?), you have to bounce off walls, turn scientists into steaks, and solve puzzles to make your way through the pseudo 2D levels of rapidly increasing difficulty. Whilst the game starts off fairly easy, you are soon facing a difficulty spike of Everest sized proportions, but all it does is make the game infinitely more entertaining.

You will often find yourself being flung around levels, timing your button presses to hit barrels which you are travelling toward at a rate of knots. There are some unyieldingly difficult challenges, of which you will fail at repeatedly, but you will not once become frustrated at the game, only at your inability to react quick enough. The level design is pixel perfect, and I often found myself laughing out loud at the audacity of the developers, at the sheer ingenuity of some of the challenges. It is a game that Twisted Pixel clearly had brilliant fun designing.

One example I can think of is a tricky challenge involving a rising water level, which was moving faster than the platform I was stood on, and barrels to shoot upwards. Now, I cannot stand being pressured in games, any feeling of being chased and I tend to switch off. With this level, even though it was supremely difficult, I tried over and over again until I nailed it, and had a blast. It took impeccable timing and reflexes, but thankfully there is no loading time between restarts, which means you can keep trying without a frustrating pause.

For a two dimensional platformer, it has more charm and personality than a lot of full priced games. ‘Splosion Man is wonderfully animated, running around like an excited child, and his sound bytes never become tiresome and often raise a smile. The soundtrack is reminiscent of a 60s Spy Movie, although I won’t spoil for you the exquisite delight you will encounter when you first run into a fat scientist.

Additional challenges come in the form of collecting a cake on every level (and I must admit I did snort when I saw the achievement for collecting all 47) and a multiplayer mode, which must be played with a mic or some sort of communication if you don’t want to lose friends, particularly when they’ve failed to ‘splode off you for the umpteenth time.

The only criticism I can make is that the levels can feel slightly samey, with only differing colour palettes giving the back and foregrounds any variety.

That said, ‘Splosion Man is one of the gaming highlights of the year, and at a time when the major publishers are announcing price hikes on triple-A titles, it represents absolutely one of the best examples of value for money. A wonderful, funny, challenging, vibrant triumph of a game, and based on this I can only hope the Summer of Arcade becomes a yearly tradition, alongside grey clouds and sweaty London Underground journeys. 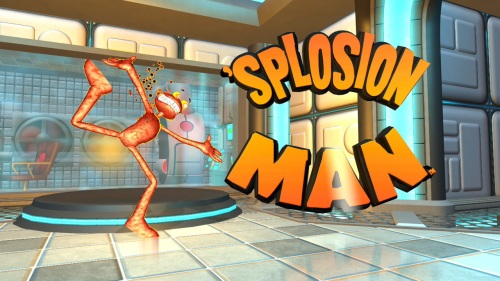