BOOK REVIEW – The Alien Next Door by Joey Spiotto 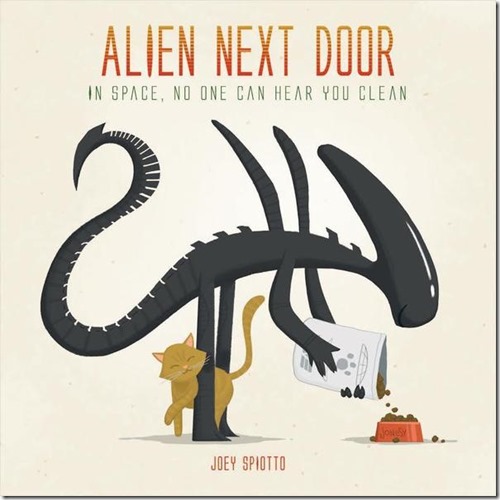 Alien Next Door is a full colour illustrated book that shows a new, caring side to the legendary science fiction monster. The only official Alien cartoon book, each new page of artwork shows the Xenomorph trying to fit in on a cold, new, alien world: Earth!

When I was approached to create this book you hold in your hands, it was like a dream fulfilled. Although I never heard from someone I would have very much loved to have talked with, I’d like to think this book would have brought some light into his mostly dark world… mostly. 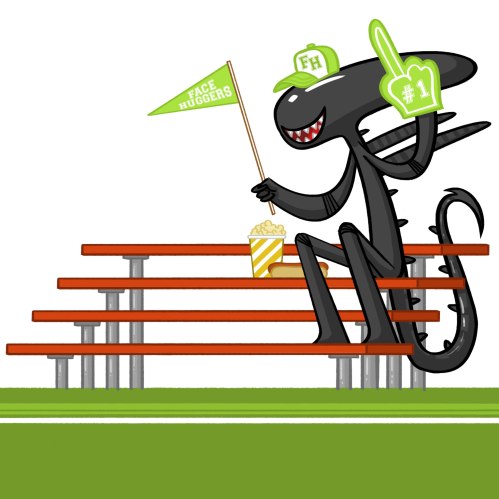 The highly unusual and quirky idea for Alien Next Door first originated when a private investigator, a friend of H.R. Giger’s, contacted Joey Spiotto. She’d been asked to track him down by Giger after he had seen Spiotto’s Alien inspired art print where he had created a fake children’s book called “Facehuggers for Everyone”.

It turned out Giger had a softer side and wanted to talk about collaborating on an Alien inspired children’s book! He was told Giger would be in touch, but unfortunately time passed on and the legendary artist passed away. Alien Next Door is the result that followed after Giger’s death. 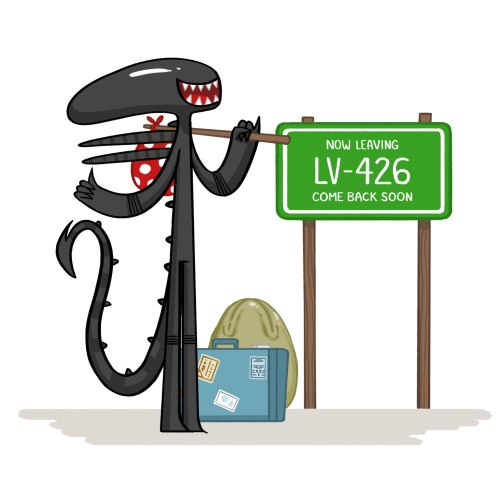 It’s an 80-page book that features a series of single page, one panel cartoons, with the occasional four-panel cartoon strip thrown into the mix. Ever wondered how the perfect killing machine relaxes after a day of scaring space marines? This is your chance to find out!

Each page, whether it depicts the Alien going bowling with Ripley and the Space Marines, or eating his breakfast cereal of choice (Promethe-O’s), is absolutely adorable, hilarious and crammed full of in-jokes for fans of the films.

Cutting onions and crying tears of acid, letting Newt use his razor-sharp tail as a skipping rope… the ideas come thick and fast and there are always some additional little funny details to soak in and enjoy.

The only real complaint is that the quality is so high, readers will race through the book and immediately become hungry for more. Surely there’s enough strong material here to make an ongoing comic strip? It really is that enjoyable! Fingers crossed… 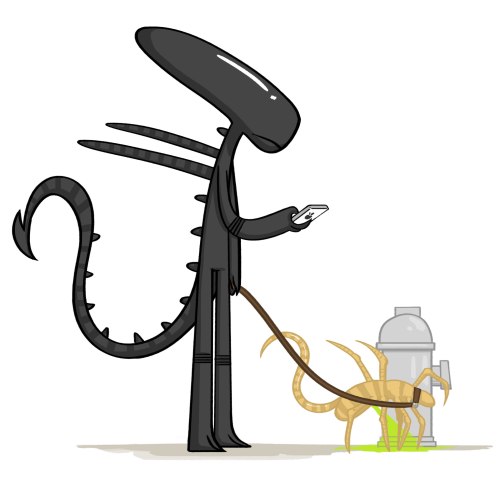 Alien Next Door is a lovely little book that will surely bring a smile to even the most cold-hearted of Alien fans. Titan Books has also done a fantastic job with the overall presentation – it feels as good to hold as it is to look at and read through.

With Christmas fast approaching and a RRP of only £9.99 here in the UK, it’s the perfect stocking filler to burst out on Christmas Day!