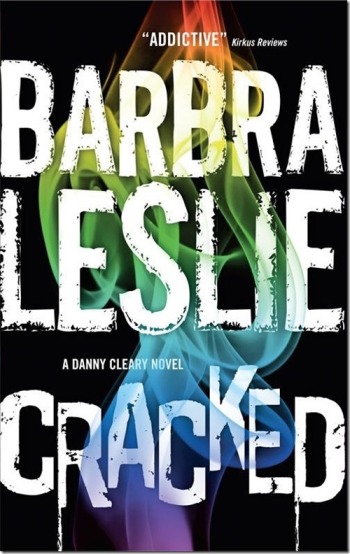 Cracked: A Danny Cleary Novel is the first instalment of a brand new thriller trilogy written by author Barbra Leslie. Published in November 2015 by Titan Books, Cracked tells the story of crack cocaine addict Danny Cleary as she desperately tries to hunt down the murderer of her fraternal twin sister, Ginger. Battling addiction, the cops and an unknown enemy, Danny must try to keep a (relatively) clear head as the plot thickens and the danger becomes more and more real for her… and her family.

All I can say is, if it didn’t feel like a choir of angels all of a sudden bursting into the room and whispering into your ears, I wouldn’t do it. Taking a hit off the pipe is like having every good thing in the world rush into your head in one moment, and stay there for a bit, and all the bad things are gone, gone, gone. It’s better than a twenty-minute orgasm. Not that I would know.

After the marriage to the love of her life ended, nice middle-class girl Danny Cleary jumped headfirst down the rabbit hole and spent over one hundred grand in a year on her new drug habit. As Cracked begins, she’s living in an apartment with her friend-with-occasional benefits, fellow crack addict and partner in crime Gene. Her bank balance is empty. They spend their days getting high, watching films, occasionally having sex and ordering crack from a dealer called D-Man, who delivers it right to their front door like a takeaway pizza.

Of course, when Danny gets the call that her twin sister Ginger has committed suicide in the bathroom of a low-rent motel, shot full of pure grade heroin, she doesn’t believe it. Ginger had it all: a loving husband, a Californian mansion home and two beautiful young sons. Travelling out to California with her rock star brother Darren, she struggles to deal with being in social situations where she can’t take drugs whenever she wants, along with the relentless pain left in the wake of her dearly departed sister. Then Ginger’s husband Fred is accused of murder and her sons are kidnapped by a women who looks exactly like Danny. It definitely wasn’t suicide and nothing is a coincidence. It just got personal.

I remembered the pledge I had made with Darren on the plane. I was going to kill whoever was responsible for this. There was even less hesitation in my heart now than there had been then. Not only had this happened to Ginger, it had happened because of me, and whoever did it was watching me. Closely.

Cracked is a dark book without question, but it remains uplifting, engaging and entertaining because there is a strong vein of comedy running throughout. Danny has a sparkling sense of humour inherited from her large, close-knit family – Darren is the same – and this makes her extremely likable even when she sneaks off to the bathroom to take some more drugs. She’s an addict and this element of the book is never glossed over. She’s an extremely resourceful and capable young woman trained in self-defence… but she’s an addict, with all the ugliness and complications that entails.

It could only have been written by someone with first-hand experience of addiction – it’s incredible how Barbra Leslie makes something so awful seem ever so slightly appealing… yet utterly appalling. It’s refreshing to have such a capable female protagonist, breaking someone’s arm, taking on the bad guys, who isn’t squeaky clean and perfect. The central mystery is fantastic, delving into the twisted black heart of American family life gone wrong (and equally, American family life done right), but also taking the time to show the inherent good to be found in most people at every available opportunity. Some of the stuff Danny gets away with is a little bit surprising to say the least, but suspension of disbelief becomes much easier when the plot is so well layered and beautifully told.

Something clicked in my brain at that second. Someone getting between me and a member of my family. Almost before Dave got the words out of his mouth, without thought or hesitation I reached around, knocked the gun out of his hand and elbowed him sharply in the face.
While he was knocked back holding his nose, I picked up the gun.

Cracked is a cracking good read, mixing the violence and dark laughs of a Tarantino film with the conspiracy-fuelled page turning of a Michael Marshall mystery thriller and the neo-noir of James Sallis. Despite Danny being fuelled by thoughts of revenge – and drugs – Cracked provides a reading experience that is always funny and most important of all, fun to read. The only slight disappointment is that some threads are left dangling for the upcoming sequel.

Cracked: A Danny Cleary Novel. The first instalment of a brand new thriller trilogy? Count this reader in for the long haul.