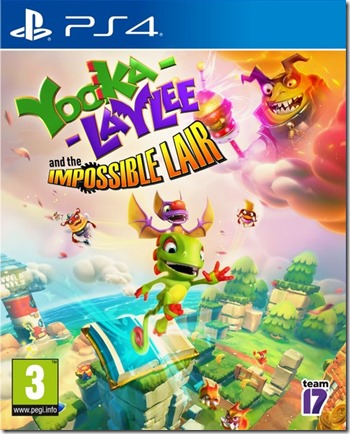 Yooka-Laylee and the Impossible Lair is the latest game from independent developer Playtonic Games. The sequel to 2017’s Yooka-Laylee (which AMO’s review described as “a journey equal parts delightful, beautiful and frustrating”), the Impossible Lair shifts from full 3D to 2.5D and the results are – for the most part – wonderful.

The Impossible Lair is a 2.5D side-scrolling platformer with a top-down 3D overworld. The game begins with Capital B – a giant bee – invading the Royal Stingdom and using a Hivemind device to enslave the Royal Beettalion Guard. The titular ‘Impossible Lair’ is loaded immediately and it’s doubtful new players will get very far – it’s tough as nails.

After failing this level, Yooka the green lizard and Laylee the purple bat are kicked out into the game’s overworld and vow to help Queen Phoebee regain control of her kingdom. This top-down area is highly reminiscent of classic Zelda games – it even has it’s own puzzles, enemies and unlockables – and serves as a gateway to the game’s various 2.5D side-scrolling levels, contained within a series of magic books. 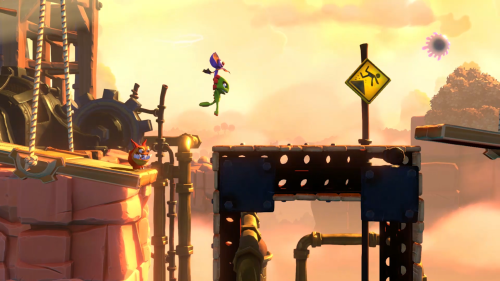 There are 20 of these levels and each level has an alternative state. For example, one level is situated on the shore of a beach. Entering the level when the tide is in loads a completely different level to when the tide is out (the former having a lot more water). Other levels might flip everything on its side, or replace ice with fire. This doubles the level count to 40 without making the experience feel padded and it’s genuinely fun to revisit each level with a fresh twist.

The gameplay is well-honed, with Yooka (and Laylee) controlling better than ever before. On PlayStation 4, Square makes Yooka roll along the ground when pointing the left analogue stick left or right and is also used to attack enemies, while X is used to jump and R1 is used to grab/spit (with Yooka’s tongue). It’s also possible to twirl jump by pressing Square or buddy slam by pressing L1 immediately after jumping. The controls are deceptively simple, easy enough to learn but surprisingly difficult to master. 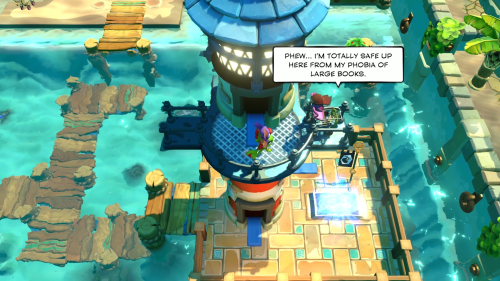 Thankfully, the game has a built-in failsafe; when players take a hit, Laylee panics and starts to fly away. However, there is a small window of time where Yooka can grab Laylee before she flies away for good, after which only ringing a special bell will bring her back. This adds an extra layer of strategy to the gameplay, as sometimes trying to retrieve Laylee can get Yooka killed and sent back to the last checkpoint – he is much more vulnerable without his purple bat friend and his abilities are greatly reduced without her (good luck trying to twirl jump solo!).

The levels are nicely varied and make full use of Yooka and Laylee’s abilities. It also helps that the game runs at 60fps, which makes the entire experience feel silky smooth and responsive. Yooka Laylee would sometimes feel like it was struggling to cope, but that’s never the case with the sequel; the colourful graphics are beautiful (although they’re sadly only 1080p, even when played on a PlayStation 4 Pro console), the controls are tight, and the charming soundtrack – composed by Grant Kirkhope and David Wise – is light, breezy and memorable. 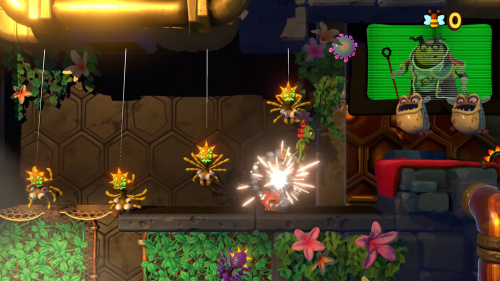 There is plenty of replay value here too, as each level has five hidden TWIT coins. These coins are used to unlock literal ‘paywalls’ in the 3D overworld which are managed by Trowzer the snake, giving Yooka and Laylee access to more levels. It’s a really nice way to pace the game and finding these special coins is always a lot of fun, encouraging exploration and creative thinking within each level. Various tonics can also be unlocked and bought as players progress; some tonics bring gameplay benefits, while others act as ‘filters’ that alter the graphical presentation (although using tonics deducts a percentage of the quills collected at the end of each level).

The difficulty is nicely balanced throughout. If Yooka and Laylee die too many times, the last checkpoint will give the option to skip ahead to the next section. This allows players of all skill levels to progress and complete each level, even though they might miss out on some hidden TWIT coins and quills (the in-game currency). However, the Impossible Lair level – which can be tackled at any time, no matter how many bees you’ve saved – really does live up to its name. 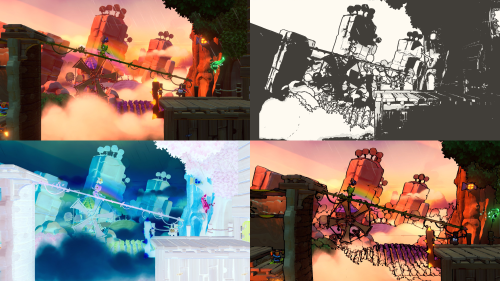 The difficulty spike is huge when playing the Impossible Lair. Each saved member of the Royal Beettalion Guard acts as a shield surrounding Yooka and Laylee; every time they take a hit or fall off a ledge, a bee flies away. Once there are no bees left, Yooka and Laylee are left defenceless – one misstep and it’s game over. Furthermore, there are no checkpoints and this level can easily take over 20 minutes to complete. At the time of writing this review, I’d attempted the Impossible Lair 14 times and only completed 36% of it.

The sheer difficulty of the Impossible Lair is a double-edged sword. On the one hand, it offers a genuine challenge that many players will no doubt relish. On the other hand, it will only serve as a barrier to completion for some players – especially as the rest of the game is much more balanced and fair. Yet when taken as a whole, there is enough enjoyment and fun to be had throughout that any reservations about the final level shouldn’t put players off too much. 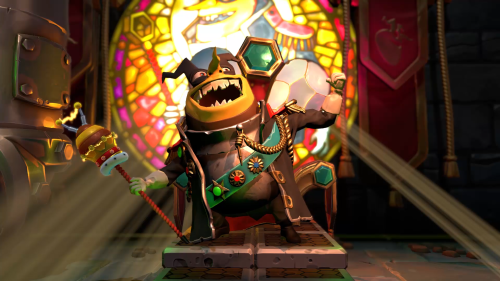 The latest Yooka-Laylee adventure more than lives up to its name then, but thankfully, there’s a lot more to it than just the Impossible Lair itself. Successfully improving on its predecessor, Playtonic Games continues to impress. In my 2017 review of the first game, I wrote how: “I hope Yooka-Laylee gets a sequel; these easy to love characters show serious potential.” In 2019, it’s a genuine pleasure to see that potential finally being realised.