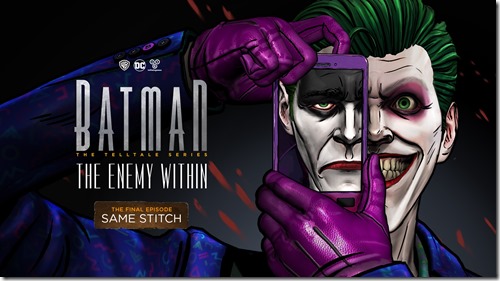 Same Stitch is the fifth and final episode of Batman: The Enemy Within, an episodic adventure game from Telltale Games (The Walking Dead: A New Frontier, Guardians of the Galaxy), DC Entertainment and Warner Bros. Interactive Entertainment. Each individual player’s unique relationship with John Doe throughout the previous four episodes will determine which version of The Joker appears in this highly anticipated finale, which Telltale has described as its ‘branchiest’ episode to date.

Same Stitch deals mostly with the ‘death’ of John Doe and his rebirth as The Joker. Telltale has been highly vocal about the two distinct storylines – and versions of The Joker – that players will encounter in this final episode, based on their previous actions and decisions.

It would be easy to dismiss such claims as clever marketing, but for what it’s worth this reviewer felt that Same Stitch delivered in terms of giving previous events tangible consequences. I spent most of the final episode as Bruce Wayne, receiving punishment for my – his – perceived sins and past crimes. 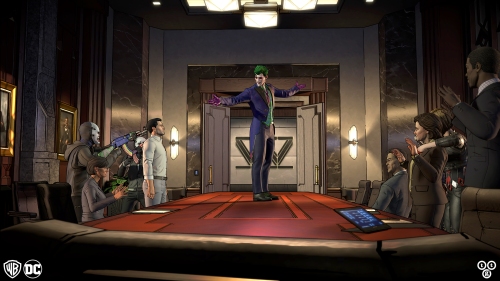 Anthony Ingruber steals the show more than ever before as The Joker, his restrained performance in previous episodes paying off in the finale as he chews the scenery with a maniacal grin on his face and a knife in his hand.

This unique version of The Joker – an impressive feat in and of itself – has been left feeling spurned by his ‘friend’ Bruce Wayne, making him both unpredictable and dangerous. His past – and that one bad day that tipped him over the edge – is no longer multiple choice (even though it still kind of is); whether he ends up becoming a villain or a vigilante, you – the player – created him.

It’s a sobering thought. It has been discussed before of course, but this latest interpretation of Batman’s nature is wonderfully realised; do superheroes by their very nature breed supervillains? Would there even be a Joker – or any Gotham supervillain, for that matter – if there wasn’t a Batman?

Never before has this question felt so much like the audiences’ direct responsibility. The final decision is tough not because it’s life or death, but because it asks players to think about these impossible to answer questions and plan for the future of both Batman and the series.

In the end, Same Stitch is a satisfying conclusion to a consistently entertaining series. It’s undeniably more of the same, with nicely choreographed quick-time-event sequences sprinkled liberally to break up the talky bits and the decision-making moments. It won’t offer much challenge for your thumbs then, but it will make you think. The stage for the next series has been expertly set. Batman will return. The Joker will return. Will you?

One response to “GAME REVIEW – Batman: The Enemy Within – Episode 5: Same Stitch (PC)”