Everybody’s Gone To The Rapture is a first-person exploration game developed by The Chinese Room and published by Sony Computer Entertainment. Originally released on PlayStation 4 in 2015, the game went on to win three times at this year’s British Academy Games Awards. On 14th April 2016, the game was released for Windows PC exclusively on Steam.

There’s no getting around it: Everybody’s Gone To The Rapture is a breathtakingly beautiful game. From the moment you’re dropped into the fictional village of Yaughton deep within the Shropshire countryside, you’ll find yourself fittingly enraptured. The initial view is stunning and even when you manage to tear yourself away and turn around, the visuals never stop packing a punch. Yaughton may be a fictional village, but it’s obviously the amalgamation of countless real-life counterparts. It’s a beautiful location that feels completely real, a humble slice of British country life. It’s also empty.

The emptiness isn’t a criticism, it’s a plot device – everyone has disappeared. It’s the 1980s and Yaughton Valley is eerily quiet. The only movement, apart from the gentle breeze stirring the trees and grass, comes from a glowing orb in the distance. Sometimes it will fly close before darting off to a nearby area of interest, leaving a trail of light in its wake. It will continually try to gently nudge you in the right direction, but whether you choose to follow it is entirely up to you.

The game’s entire small open world is available to you from the outset. Yaughton Valley is split into five key ‘areas’, each dedicated to a specific character whose name is briefly shown on-screen. Interaction is limited to three specific situations: listening to radios, answering telephones and watching visions from the past play out as outlines of pure light. The first two types of event are triggered by simply walking over to the sound of radio static or a ringing telephone respectively and pressing a button. The visions from the past sometimes trigger automatically when you’re close enough, but other times you’ll need to ‘tune’ them – with a Steam controller this involves tilting left and right until you find the sweet spot.

That’s as far as gameplay and interaction goes in Everybody’s Gone To The Rapture and of course, this lack of traditional gameplay will make or break the game for many players. Thankfully, those who can look beyond the simplicity of the gameplay will be rewarded with a story that is captivating even when it’s being elusive. The experience feels almost like an interactive radio play, with the player triggering snippets of audio that slowly fill in what happened and where everyone has gone. When past events are triggered, the characters are shown only as echoes, mere outlines of light – but it doesn’t matter. There is enough hinted at – and the voice acting is strong enough – for players to fill in the gaps themselves. 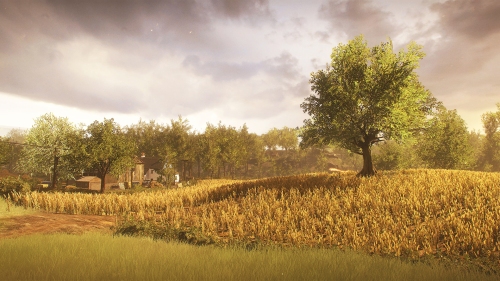 For a game so heavily story dependant, it’s hard to write a review without giving too much away. There are two main story threads. The first deals with why Yaughton is now empty and involves two scientists who were conducting research in the nearby observatory. The second is actually a series of smaller personal stories that at first seem entirely separate but soon weave together into a rich tapestry of revelation and intrigue that only furthers the main drama. It’s a satisfying narrative that throws up as many questions as it answers and will no doubt keep gamers chatting online about what it all means for a long time to come.

The downside to all of the above is the walking speed – it’s slow. There is a ‘run’ button, but it needs to be held down for quite some time before any speed is built up, it can’t be used indoors or during certain moments… and it’s still rather slow. The world is so beautiful that it begs to be explored and often rewards the player for doing so. Yet, when the current orb of light is beckoning you to carry on down the road, it’s hard to cut through a nearby field when the journey will take so long and could end up being for nothing…

Regardless, Everybody’s Gone To The Rapture is an engaging experience that tells an intriguing sci-fi tale and continually evokes a sense of wonder. The classical soundtrack composed by Jessica Curry – made up of choral cues that are achingly haunting and beautiful – is a perfect match for the stunning visuals. It doesn’t quite reach the heights of Gone Home (although it’s roughly on a par with The Vanishing of Ethan Carter), but it does do a wonderful job of making you care about a cast of characters you’ll never actually meet and can never truly see. It’s undoubtedly a Marmite game then, but in this reviewer’s opinion it’s a great one – despite its heavy shoes.