INTERVIEW – In Conversation With Mathias Johansson (The Journey Down Kickstarter, SkyGoblin) 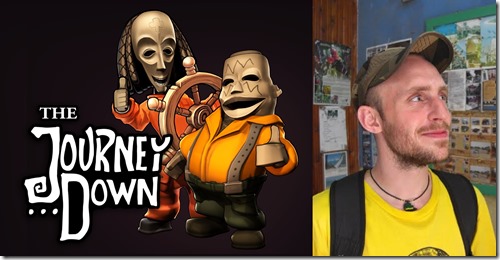 The Journey Down is a three-part afro-noir point-and-click adventure saga set in a rich, atmospheric musical world for PC/Mac/Linux and iPhone/iPad. Alternative Magazine Online has been lucky enough over the years to review the original free (low-res retro) release along with The Journey Down: Chapter One and The Journey Down: Chapter Two (both in HD), as well as interview original creator Theodor Waern and soundtrack composer Simon D’souza. The Journey Down: Chapter Three was recently announced via Kickstarter, with SkyGoblin hoping to reach their kr300,000 goal by the 31st October 2015. It is therefore with great pleasure that AMO presents an exclusive online interview with Mathias Johansson, who is in charge of story and programming at SkyGoblin!

Hi Mathias, thank you for your time and welcome to Alternative Magazine Online!

Thank you Martin, happy to be on board! 🙂

Sure! I’m a game designer and programmer who, like many others, started off by playing around with map editors for other games. The first one was a puzzle platformer called Wrecking Crew for the NES that I spent much crazy quality time with.

How did you first become involved with SkyGoblin?

I teamed up with Theo and a bunch of other guys from our ultra-nerdy class in highschool. We started pitching our games to publishers and trying to make a living off it but it didn’t really work out. So I went on to university to get my MSc, but kept working with Theo and the highschool team in my spare time. We founded Sub-Level X Entertainment in 2005 and by the time I got my degree, game development had become a fulltime job. As the years went by, the team transformed bit by bit and eventually it became SkyGoblin.

You’re in charge of story and programming at SkyGoblin – what does this role involve?

Well, I think it’s more fair to say that Theo and I are equally in charge of the story. This usually involves the two of us spawning all sorts of ideas (we call it “brain farting”), whiteboard scribbling, walking in circles and consuming dangerous amounts of coffee. As for programming, I am in charge of both engine programming and game scripting, but also first line support, server maintenance, IT infrastructure and general troubleshooting (when Theo or Henrik screw up their workstations). In short, it’s a pretty busy job. 🙂

For those of AMO’s readers who haven’t read our previous reviews and interviews – what is The Journey Down all about?

The Journey Down follows Bwana and Kito in their search for the mysterious Underland, as they’re following in the tracks of their long-lost father, Captain Kaonandodo. The first chapter is set in the outskirts of St Armando where Bwana is approached by a mysterious woman from Agibo University, and together they are thrown into a twisting tale of corruption and danger. I’ll let you find out the rest for yourselves 🙂

The third chapter was recently announced as a Kickstarter campaign – what made you decide to go down the crowdfunding route?

Lack of money, for starters. We were hoping to fund the third chapter solely with revenue from Chapter Two, but even though Chapter Two received even better reviews than Chapter One, it was really hard to reach out and make enough money to live off it for an extended period of time. Part of the reason for this is that Steam, which is a hugely important source of revenue for us, is a much tougher market now than just a few years ago. Another reason is that players tend to be sceptical to episodic games because you don’t know when (or if) the series will be complete. Personally, I often hold off watching a TV series while it’s being aired and binge-watch the entire season when it’s finished.

Now that we have reached the final chapter of the series, players can feel confident that the will get the whole shebang if they decide to support the Kickstarter. With the money from the Kickstarter we’ll then be able to work non-stop on The Journey Down and bring the series to a bombastic conclusion.

What can you tell us about Chapter Three?

The third and final chapter will cover a lot of new ground and introduce lots of locations and characters that haven’t been seen before. For the first time, you’ll get to visit the mythical Underland and learn about the secrets that have been hidden down there. You’ll also spend some time in the dazzling metropolis of St Armando where an underground resistance movement is scrambling to put up a fight against oppressive government forces. Mixed in with all this is a whole lot of quirky puzzles, occasional gags and – most importantly – saxophone. We are going to seriously max out the soundtrack for this chapter so be prepared for smoking saxophones and screaming electric guitars!

What’s the technology behind the game?

We’re using our own game engine, called Gobby, written by our former colleague Markus Larsson. Gobby is a pretty neat piece of software written in C++ that we cross-compile for Windows, Linux, OS X and iOS, so we don’t need to maintain separate code bases for each platform. The games are then developed “on top” of the game engine. We use a scripting language called Angelscript and our own custom-built editor to create the rooms and puzzles that make up each chapter. So that’s where I spend the most of my time. Scripting is my favorite part of the job, because every little line of script code makes an immediate and visible improvement to the game and I love to see quick results.

What rewards can backers look forward to?

For starters, you can get the whole trilogy as a digital download at a bargain price. For those who are prepared to spend a little more, you can get the soundtrack and few more downloadable goodies as well. Then there’s the actual, physical rewards where you can get the boxed edition of the game, t-shirts, posters, pirate maps and whatnot.

There were some rewards available that let you name in-game characters, but they were all sold out in just a few days. We’re thinking of adding some new rewards before the campaign is finished though, so if you check in on the campaign page in the coming days you might find a few surprises there!

How will this third and final chapter improve on the first two chapters?

Developing the second chapter was a very important lesson to us as a team because it was the first time that Theo and I worked together on both story and puzzles. We’re both really pedantic when it comes to the game design, but we’re pedantic about different things and, hence, it became quite complicated to arrive at a design that met all our criteria.

Going from Chapter Two to Chapter Three, we’re building on these experiences and taking the design a step further. We decided early on that, rather than having the game revolve around a central hub, we wanted to the create a journey that takes the player through many different environments. Another new feature of the third chapter is that you’ll get to play as Lina during parts of the adventure.

Will it bring a satisfying close to the trilogy?

No doubt! I can confidently say that – if the Kickstarter succeeds – we’ll give The Journey Down a truly epic ending. We’ve been working on the design for the finale for over a year and it’s going to be absolutely over the top! Completing the trilogy will also be a satisfying milestone for all of us who have been working on the games over the past couple of years. It feels good knowing that we are going full circle on this project and wrapping everything up just the way we’ve intended.

Will all of the original voice actors be returning to reprise their roles?

Yes, we’re definitely going to keep a lot of the voices from previous chapters, especially the main cast that have done a truly amazing job giving life to the central characters. We’re also going to add a couple of new voices to the game, some of which are yet to be cast.

I had the honour of interviewing the original game’s hugely talented soundtrack composer Simon D’souza back in 2011. I was immensely saddened when I heard that he had passed away last year. How did this impact the production of the soundtrack for chapters two and three and the project as a whole?

Simon’s cancer diagnosis came as a huge shock to us at SkyGoblin, and Theo in particular, who had been working very closely with him for years. Despite his illness, Simon continued writing the score for Chapter Two and kept asking for more assignments, and by the time his condition was severe enough to stop him from composing more material, he had already finished half of the soundtrack.

Before Simon passed away, he asked Theo to get in touch with Jamie Salisbury, Simon’s old bandmate, and ask him to complete the soundtrack. Luckily, Jamie accepted and did a truly amazing job picking up from where Simon left off and, in the end, their joint production won an award for Best Music. So even though we’ll never get Simon’s saxophone magic back, we have Jamie’s new kind of magic to look forward to, and we’re really excited to have him on board for the final chapter.

What’s next for yourself and SkyGoblin after the final chapter of The Journey Down has been released?

We honestly don’t know yet, and we probably won’t know until we’re there. We have a couple of ideas for spin-off games inspired by various locations and events that were originally designed for The Journey Down, but cut from the final design for one reason or another. Another option that we’re pretty excited about is co-developing a game with another studio, so we can make a really big production. We’ve also got a bunch of different game design drafts and prototypes, for different genres, that we’d love to materialize when we get a chance.

Thank you for your time – I can’t wait to play the third and final chapter of The Journey Down trilogy and I wish you all the best with your ongoing Kickstarter campaign!

Thanks for helping us spread the word! 🙂

For more information about The Journey Down Kickstarter – and to pledge your support – please visit:

One response to “INTERVIEW – In Conversation With Mathias Johansson (The Journey Down Kickstarter, SkyGoblin)”