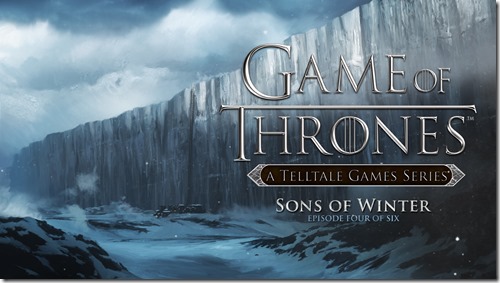 Game of Thrones: Episode 4 – Sons of Winter is the fourth episode of a six-part episodic adventure game series from Telltale Games, creators of The Wolf Among Us and Tales from the Borderlands. In Episode 4, the fate of House Forrester continues to hang in the balance – but they’re fighting back however they can, with whatever resources they have at their disposal. Their house may be broken, but their spirit is still very much alive…

Sons of Winter is an episode that needed to happen for the series to not become too bogged down in its own doom and gloom. For three episodes now (with the second episode often feeling like it was treading water), we’ve seen House Forrester being beaten down into the dirt and mud, time and time again. Episode 4 marks a turning point for the characters, the story and the series as a whole.

Success is still a long way off (and by no means guaranteed), but here we get a taste of hope – and what a taste it is. What makes Episode 4 so enjoyable are the little steps of progress, the small moments of victory. We’ve come to know and care about these characters and it’s high time they got some payback for the injustices they’ve endured. Making decisions is even more fun than usual as a result, whether it’s which guard to shoot with a crossbow or when to bang your cane into the ground.

Gared, due to be executed for a crime he didn’t commit, abandons Castle Black in search of the mysterious North Grove, but his story is mostly just a preamble to a larger tale that will no doubt be revealed in Episode 5. Meanwhile, Mira finally gets to use all of the tricks she’s learnt so far as she duels with her tongue in the political fighting pits of King’s Landing. In a world that often focuses on violence to solve problems, it’s great fun to experience the Tyrion-esque power of words alone in video game form.

Yet it’s Asher’s story that gets the most focus here – or rather, that of his best friend and most trusted companion, the woman sellsword Beskha. Tasked with infiltrating the slave city of Meereen by an icy Daenerys Targaryen, Beskha soon gets incredibly drunk and reveals a secret that is both shocking and heartbreaking. The voice acting between Asher (Alex Jordan) and Beskha (Toks Olagundoye) really sells their complicated friendship and their infiltration into Meereen marks one of the best action sequences of the series so far.

Yet it’s once again the ongoing story of the current Lord of Ironrath, Rodrik Forrester, that hits home the hardest. They’re perhaps not the most enjoyable sequences to play – they’re certainly the most stressful – but there’s something quite inspiring about a man literally broken, mending himself together one pained step at a time, facing overwhelming odds to save his family and protect his loved ones. Russ Bain gives the stormy role his all and as a result, you’ll be on edge whenever a quick decision must be made. His strong performance is the cherry on top of a game series that, much like him, stumbled at first but now seems to be finding its feet and can hold its head up with pride. Sons of Winter is a wonderful episode that, despite some occasional graphical glitches, is the best released in the series to date.