Oddworld: New ‘n’ Tasty is a ‘ground-up remake’ of 1997′s Oddworld: Abe’s Oddysee, developed by Just Add Water and published by Oddworld Inhabitants on PlayStation 4. Reimagined in eye-catching 2.5D, players must once again take control of Abe the Mudokon and help him escape from RuptureFarms!

Abe’s Oddysee was a tough-as-nails 2D sidescrolling platformer and thankfully, New ‘n’ Tasty more than ably matches the spirit of the 1997 original despite its new bells and whistles. As expected the graphics have been given a complete overhaul, yet the presentation of the game remains darkly beautiful in the true Oddworld style. Gone are the blurry backgrounds and sprites of the mid-90s (which were admittedly gorgeous at the time) along with the static screens that stitched the original game together. New ‘n’ Tasty is now a true sidescrolling platformer, featuring levels that pan slickly with Abe as he bumbles along.

It’s refreshing to play a remake that so faithfully captures the atmosphere and nostalgia of the original product without remaining stuck in the past. The story remains the same – our hero Abe begins the game as a contented floor-waxer at RuptureFarms, the biggest meat-processing plant on Oddworld. Enslaved along with his fellow Mudokons, he seems happy enough until he overhears Molluck the Glukkon’s plans to create a new snack… and the main ingredient is Mudokon! Cue dramatic music and Abe being pursued by gun-toting Sligs, through the factory and beyond…

However, the game has changed – for the better. New ‘n’ Tasty isn’t just a visual upgrade, it’s an upgrade of all the systems and gameplay mechanics that set the unlikely heroic journey of Abe apart from similar games way back in 1997. Playing through this ‘ground-up remake’, it soon becomes apparent how gracefully the core experience has aged. In many ways, it’s still far ahead of the competition even today. Everything fans will remember is present and correct. Gamespeak (which allows you to communicate with your fellow Mudokons… and fart) is still hilarious and a blast to use, giving Abe a personality that extends far beyond the charming cutscenes. Grenades aside, Abe is very vulnerable and must sneak, run, jump, ride (the Elum!) and possess his way out of trouble. You’ll die… a lot.

The checkpoint system is a little bit more forgiving this time round, but the most interesting update is the inclusion of a quick-save feature which is activated by clicking the DualShock 4’s touch pad. This can be ignored by purists of course, but for those who may find the challenge slightly too steep (and infuriating) at times, it’s a godsend. The controls are also a lot more responsive, although there is still a certain degree of looseness to Abe’s movements, especially when jumping. This may frustrate some gamers, but part of the fun is failing and trying again and again – with persistence and skill, the various puzzles can be completed to much satisfaction. Unlike the original game there are also various difficulty levels to choose from, which should make Abe’s adventure accessible to a much wider audience. 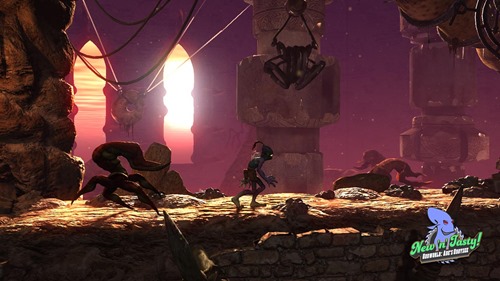 Oddworld: New ‘n’ Tasty is an arguably pricey downloadable remake of an old game – but against the odds, it manages to feel fresh, new and… you get the idea. Abe is an iconic gaming figure and it’s wonderful to see him return in 2014 with such style and confidence. Being reintroduced to everyone’s favourite Mudokon and the Oddworld universe is worth every single penny of the asking price. The difficulty has some spikes and it might feel a tad short if you rush through, but the 299 Mudokons (the original had 99) waiting to be saved will no doubt increase longevity and encourage replays. For long-time fans and newcomers alike, escaping RuptureFarms is a hilarious and challenging adventure that will leave players wanting more and shouldn’t be missed.