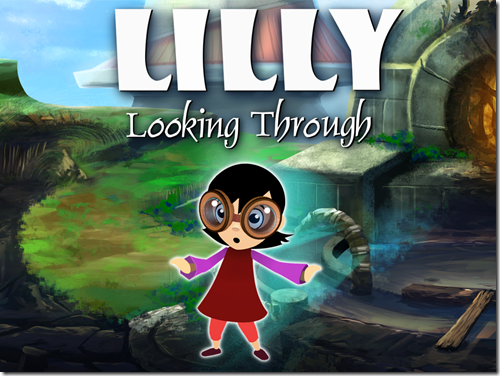 Lilly Looking Through is a point-and-click adventure game (PC/Mac/Linux) created by indie studio Geeta Games. In 2012 talented husband and wife team Steve and Jessica Hoogendyk asked for $18,000 to develop their first game via Kickstarter and went on to raise $33,516. In Lilly Looking Through, Lilly must rescue her brother Row after he is swept away by a magical red scarf – by using her magic goggles!

Lilly Looking Through has an extremely simple premise – as soon as the game begins, Lilly witnesses her brother Row being taken away by a magical red scarf that seems to have a mind of its own. She sets out to rescue him and what ensues is a gently paced adventure that puts an emphasis on environmental puzzles and leisurely exploration.

The gameplay mechanic that sets Lilly Looking Through apart is the use of a magical pair of goggles that allow Lilly to see into the past, and change the future. For example, the gap between two stone platforms can be bridged by going back in time, carefully placing an acorn and making sure it’s watered. Returning to the present, a tree has now grown with its twisting branches forming a bridge! The effect is striking and effortless – although there are only a handful of locations, they’re kept fresh by frequent visits to the past.

The puzzles are for the most part well-implemented and logical. Lilly often has to interact with various levers, pulleys and switches to progress. Although the difficulty isn’t high, the pacing is very relaxed and impatient players will find themselves getting frustrated fast if their only concern is to progress as quickly as possible. Yet fans of the genre will find the challenge for the most part to be just right, with the relaxed gameplay offering plenty of time to soak in the rich atmosphere and enjoy the pleasant, unassuming music and sound effects.

Sadly, other areas of the gameplay can sometimes fall slightly short. Although the player directly controls Lilly, the puzzles will occasionally allow you to interact with the world as an outside influence, breaking the fourth wall and, as a result, the game’s sense of reality. Towards the end of the game, there is also an over-reliance on colour-based puzzles that become a process of trial and error. This is a shame, as such moments halt the game abruptly in its tracks and clash with the dreamlike design of the world.

Double-clicking, unlike in most adventure games, doesn’t make Lilly run – instead, it causes the camera to zoom in. This isn’t a bad idea in theory, but in practice it makes the beautiful graphics look slightly blurry and doesn’t offer any real advantage while playing. I imagine that many seasoned adventure gamers will constantly find themselves accidentally zooming in throughout their short adventure with Lilly – I certainly found this to be the case!

On a more positive note, the graphics are absolutely gorgeous when viewed properly. Switching between the past and present is a joy that breathes new life into each area. The game’s most memorable moments involve perfectly timing when to activate Lilly’s goggles. It’s a shame that this mechanic wasn’t emphasised more as it really is wonderful. Lilly herself is presented as a 3D model that somewhat clashes with the traditional backgrounds, but her design is very endearing and the animation is spot-on.

Lilly Looking Through doesn’t try to reinvent the wheel – it simply looks at it through a new pair of goggles. The main problem is that the experience can sometimes feel too simplistic: the storyline is practically non-existent and as a result the beautifully realised world raises more questions than it answers. This approach has worked extremely well in the past (think PlayStation 2’s Ico) but here the game ends up feeling like it’s only telling half a story – something backed up by the abrupt and disappointing ending.

Still, it’s hard to hold a grudge. For a first-time effort from a relatively young indie studio, Lilly Looking Through is admirable. It’s a lovely way to spend a couple of relaxed hours – give or take – that approaches greatness but sadly falls short at the final hurdle. Further adventures would no doubt be welcomed with open arms by the adventure gaming community. Here’s hoping that Geeta Games isn’t finished with Lilly just yet…