Flashback HD is a science fiction platformer developed by VectorCell and published by Ubisoft. A remake of the classic 1992 Delphine Software video game Flashback – and overseen by original designer Paul Cuisset – players once again take control of Conrad B. Hart as he tries to piece his memory back together and foil an alien plot to destroy planet earth.

The original Flashback is a classic video game still fondly remembered by many gamers of the early 90s. Featuring beautiful rotoscoped animation (similar to the first Prince of Persia), this fluid action platformer was more like a carefully crafted puzzle game than a shoot ‘em up and went on to become a commercial and critical success. Which is why this remake is so puzzling for all the wrong reasons – it’s heavily focused on shooting, the 3D graphics do nothing to stand out from the crowd and the simplistic story has been thoroughly overcomplicated.

First impressions prove underwhelming. The opening cutscene looks nice enough (the original game was one of the first titles to fully embrace cinematic cutscenes) but the ‘Skip’ prompt remains on-screen throughout, completely destroying the mood as Conrad makes his escape on a flying motorbike. Crash-landing in a jungle on Titan, we discover that Conrad doesn’t have a clue who he is. Taking control, things start to look up. The side-scrolling gameplay is highly evocative and reminiscent of the original game and the lush opening environment represents a respectful update, despite its lack of visual flair.

Sadly, this is where the positives end. Although Conrad now has the ability to aim 360-degrees with his pistol, the shooting mechanics and the enemies you’ll face are very frustrating indeed. Whereas the original game felt methodical, like a constantly evolving puzzle begging to be solved by just-one-more-try trial and error, the HD update encourages players to tackle overwhelming odds by simply pounding the trigger and hoping for the best as multiple enemies swarm the screen. The gameplay is often so frantic – and the enemies so aggressive – that players will be reduced to blindly shooting with Conrad’s infinite ammo pistol while running and rolling left and right across the screen.

The reason this presents such a problem is that the developers seem to have forgotten that the focus was always on exploration of the environments, not the gun fights. The analogue controls offer some improvements over the original, but the climbing mechanics of each level are very stiff and the fluidity of the rotoscoped animation has been lost. The verticality of the levels should have added to the gameplay, but the sad truth is this: if you try to climb during combat to gain a strategic advantage, you’ll probably die. The difficulty has been artificially bumped up by the game’s numerous problems and despite being crammed full of combat, the shooting just isn’t that much fun. Furthermore, the upgrade system doesn’t make much of a notable difference to the gameplay and would require multiple playthroughs to fully master, which in all honesty seems like extremely wishful thinking from the developers. 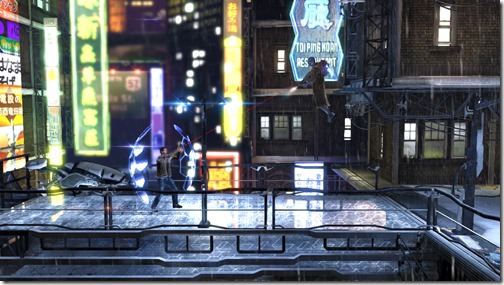 The teleporter makes things a bit more enjoyable when it’s finally introduced (allowing Conrad to reach otherwise impossible locations) but the grenades are useless during combat (they must be aimed precisely) and once you’ve reached the halfway point, your patience will no doubt be starting to wear precariously thin. The simple storyline has been fleshed out somewhat, but it’s so poorly retold that this actually becomes a detriment. Perhaps most disheartening of all, Conrad has suffered even more than the game itself during the upgrade to HD – he’s devoid of personality, looks totally generic and his voice actor, while passable, has to deliver such lines as “awesome-sauce”. Sheesh.

Add moments where the game will glitch making progress without a checkpoint restart impossible, and one particularly frustrating moment for this reviewer where death resulted in a black screen that required a full reboot of the PlayStation 3, and you have a game that creaks and groans while never seeming to particularly strain itself. If it sounds like this game is terrible, it isn’t. It’s merely average and doesn’t justify the positive connotations that come along with its iconic name. There is some forgettable fun to be had, but it’s always overshadowed by glorious memories of 1992. The original Flashback is included but – surprise surprise – there are problems. The cutscenes don’t feature any music and because it’s shown on a digital arcade cabinet, the screen size is miniscule. It could have been Flashback HD’s saving grace. Instead, it’s the final nail in a thoroughly average coffin. A missed opportunity.