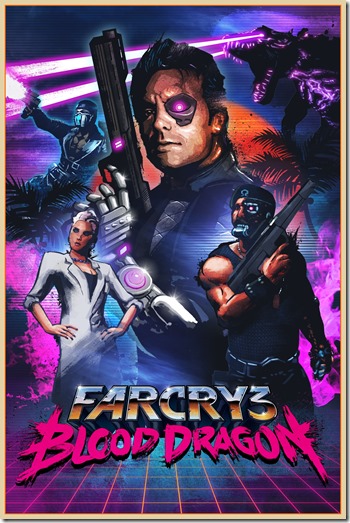 Far Cry 3: Blood Dragon doesn’t take itself too seriously, and neither should you. It’s an overt love letter to the action films and video games of the 1980s. The 16-bit cutscenes perfectly encapsulate the game’s bold art direction, looking like something ripped directly from an old Mega Drive game. During gameplay, the once bright and colourful graphics of Far Cry 3 are perpetually darkened, drenched in neon and covered in old VHS tape scanlines, a visual motif that runs throughout the entire experience.

It’s undeniably Far Cry 3 underneath it all, but the changes both graphically and to the gameplay do enough to make Blood Dragon convey its own unique sense of identity. Playing as Sergeant Rex Power Colt is a total power trip – high falls no longer cause damage, the majority of the best abilities of Far Cry 3 are unlocked from the outset and even something simple like reloading is done with a show-offy swirl of the gun magazine. You can even press a button to flick your enemies the bird with your cyborg, terminator-esque arm. This is the game Duke Nukem Forever could – and should – have been. 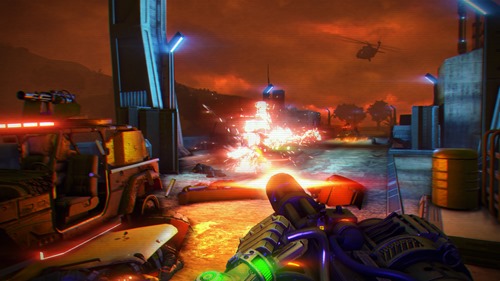 The gameplay mixes stealth and balls-to-the-wall action with ease – weapons feel pleasingly futuristic and enemy soldier’s heads regularly disappear in a violent explosion of neon-blue blood. Pilfering dead bodies will also collect ‘cyberhearts’, which can then be thrown to distract or lure the titular ‘blood dragons’ that roam the unnamed island where the game takes place. These intimidating foes have terrible eyesight – as long as Rex crouches and makes no sudden movements – and cannot easily be defeated until later in the game.

‘Blood dragons’ can actually work to the player’s advantage when taking over an enemy base – turning off the dragon shields and luring a blood dragon into a base with cyberhearts will save you bullets in the short-term… but then you’ll have to deal with the blood dragon afterwards. Taking over bases – along with other activities such as side missions and hunting cyber-animals – can be fun, but those who played Far Cry 3 far beyond the main campaign may feel like they’re re-treading old ground. 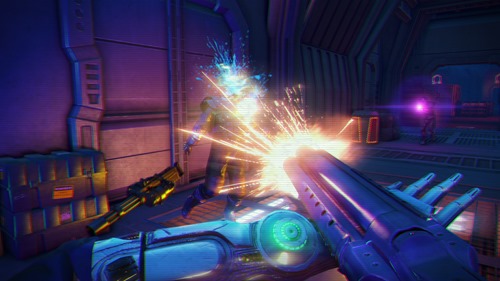 Thankfully, the main campaign missions are lengthy and challenging despite their small number, and ability acquisition and levelling up is automatic. The more you play, the more you are rewarded. Simple. It doesn’t offer the same illusion of choice as seen in Far Cry 3 with Jason Brody, but for a downloadable title this linear method of progression is the perfect fit. The main problem with the side missions is that the world is a lot murkier and less fun to explore than the island in Far Cry 3, but the main story missions more than make up for this by being over the top, explosive and frequently outrageous.

None of this would work half as well of course without the stellar voice acting of legendary 80s film star Michael Biehn (Terminator, Aliens) as Rex Power Colt. He sounds like he’s having a blast and his enthusiasm makes even the weaker lines of dialogue hit their mark and evoke a genuine chuckle. The storyline is totally ludicrous but Biehn and the rest of the voice cast err on the right side of caution – and cheese – to present a game that can laugh at itself without becoming laughable. The soundtrack by Australian electronic music duo Power Glove is also phenomenal, playing homage to classic films such as Terminator, Blade Runner, and even Rocky IV during the game’s ‘this shit is bananas’ grand finale. 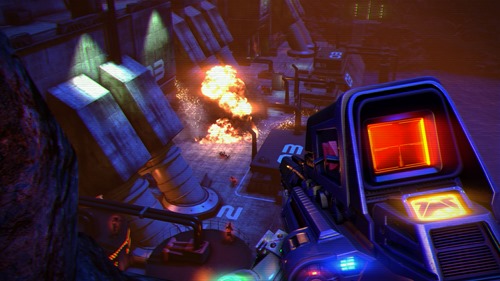 Far Cry 3: Blood Dragon is a no-brainer in every sense of the word… and that’s a compliment. If you enjoyed Far Cry 3 – or even if you never played it but enjoy first-person shooters in general and love the 1980s – be sure to buy this stand-alone expansion pack. The side missions can become repetitive, the blood dragons can be more hassle than they’re worth and the intentionally off-the-wall storyline sags in the middle, but the core story missions will last players anywhere between 4 to 5 hours and are well worth experiencing. In many ways, being based upon Far Cry 3 and limited in scope as DLC is what ultimately drags the game down a notch – lets hope for a fully fledged Rex Power Colt video game in the future. Until then, in the words of Dr. Elizabeth Darling: ‘I wanna be blinded with your cyber-love.’