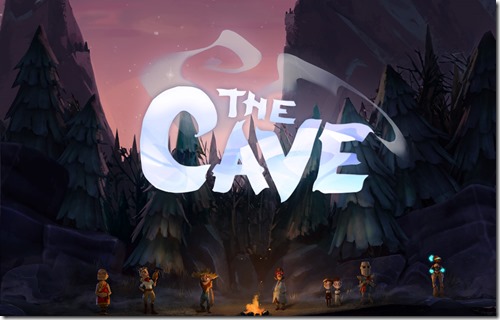 The Cave is a downloadable 2.5D platform-adventure video game developed by Double Fine Productions and distributed by Sega, released in January 2013 for PlayStation 3, Xbox 360, Wii U and PC (Steam). The game’s producer is none other than Ron Gilbert, the legendary game designer behind such classic adventures as Maniac Mansion and Monkey Island. Based on an idea Gilbert had over 20 years ago, players must select three unique characters before descending into a cave that eerily reflects their darkest personality traits.

Although The Cave is helmed by one of the most well-known names within the point-and-click adventure gaming community, it is not a traditional adventure game. Presented as a 2D platformer with 3D graphics, players must explore the titular cave by running, jumping, climbing and dropping, whilst solving often simple (and occasionally fiendish) puzzles that require the use of specific items – a concession to our good old adventure gaming friend the inventory.

The game begins with a magical talking cave (voiced by veteran voice actor Stephen Stanton) introducing itself (himself?!). “Welcome. Don’t let my sultry and mysterious voice startle you. For hundreds… nay thousands… nay, nay, nay tens of thousands of years… people have come to me in search of what they desire most.” Already, you should have some idea of the tone of the game – it’s silly in the nicest way possible. 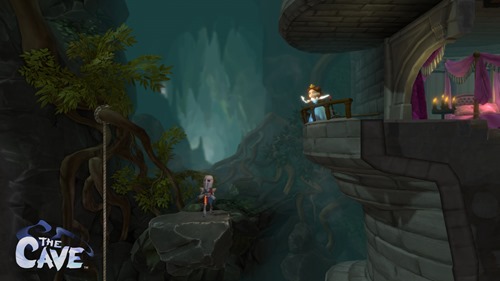 After the cave has finished introducing itself (and lamented the difficulties of dating when you’re a talking cave), it’s time for the player to be introduced to the game’s seven playable characters: The Monk, The Adventurer, The Hillbilly, The Scientist, The Twins, The Knight and The Time Traveller. Each character is brazenly stereotypical – intentionally so, which is absolutely fine, fitting with the tone of the game well – and possesses their own unique ability. For my playthrough, I chose The Monk (who has the power of ‘Telekinesis’), The Twins (who can make ghostly clones of themselves) and The Knight (who has a ‘Guardian Angel’ ability that acts as a protective force field, shielding him from taking damage).

The player’s chosen trio of characters can be swapped between at will and all three must be used in tandem to progress throughout the cave’s various levels. Most levels will be the same throughout each and every playthrough, but certain levels are determined by the characters you have chosen. For example, as I chose The Monk, The Twins and The Knight, I was faced with the Monastery, Mansion and Castle levels respectively. The puzzles are often well thought out, but many aren’t character specific – you just need to use any three characters, which undermines the level design a bit at times. Thankfully, there are plenty of puzzles where the unique abilities of each character do come into play, it’s just a shame that each character can only hold one item at a time.

The ability to hold only one item at a time can hamper the flow of the game, especially as the levels always encompass large areas that sprawl sideways, upwards and downwards. You can often be exploring with one item being held by a character, before realising you need another. Do you drop the current item and go fetch the one you need, or use another character to bring it to you? The problems inherent with juggling three characters who can only hold one item each probably won’t be alleviated during local mutiplayer sessions either – apparently there is no split-screen and even during co-op mode only one character can be controlled at a time.

However, despite some gameplay clunkiness the design of The Cave is fantastic, especially for a downloadable title. The graphics are colourful and stylised and there are some wonderfully dark scenarios, including the poisoning of soup and retrieving an amulet from a princess, not by saving her, but by sending a hungry dragon her way. The characters seem very stereotypical as previously mentioned and rather undeveloped, however there are many cave paintings to collect. Each cave painting unlocks a piece of artwork that slowly reveals the story of one of your chosen characters. These are interesting and give the characters added depth, but it’s a real shame that this information couldn’t have been disseminated throughout the course of the gameplay itself. 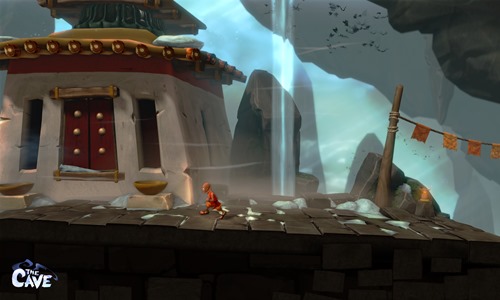 The Cave shines most during each character’s tailored level – everything else feels too much like filler. The fact that each character feels largely the same despite their unique abilities also hurts the game. There are seven characters so it would take at least three playthroughs to see everything the game has to offer, but after the first playthrough it’s debatable whether you’d feel the urge to replay, at least straight away. The Cave has an interesting concept and strong design pulled down by repetitive gameplay. It isn’t the best looking game in town, nor does it possess any particular depth. In the end, it’s The Cave’s winning sense of humour and personality that makes it worth experiencing and playing.