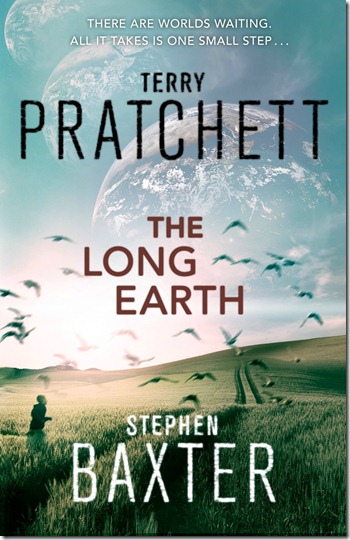 The first in a two-part collaborative effort between Terry Pratchett (the Discworld series) and Stephen Baxter (the Xeelee Sequence series), The Long Earth is a novel named after the seemingly infinite number of parallel worlds at its heart, worlds that become traversable by most humans with the invention of a simple homemade device.

Primarily set fifteen years after ‘Step Day’ – the day that schematics for the machine went viral and the ‘Long Earth’ became common knowledge – the story follows Joshua Valiente, a natural ‘stepper’ who can cross worlds entirely of his own accord. His talent catches the attention of Lobsang, a supposed former Tibetan motorcycle repair man, reincarnated as a fully cognitive computer (a rare point of Discworld-esque silliness). The pair set out on an exploratory journey into the depths of unrecorded worlds in an attempt to discover what lies at The Long Earth’s heart.

Despite containing many sci-fi elements imperative to its existence, The Long Earth is ostensibly a young adult adventure novel. Which is to say, it reads like one the vast majority of the time. It is reminiscent in many ways of Kenneth Oppel’s Airborn, but while that author fully embraced his middle-grade-bordering target audience, Pratchett and Baxter appear more reluctant to follow suit. Take the main protagonist for example. Twenty-eight-years-old, but more akin to someone half that age. Indeed, the novel would have lost nothing had it conformed to that young adult imperative of having a teenage main character. There is also the occasional splurge of blue language thrown in, not uncommon to young-adult fiction, but in this instance it adds nothing to the prose given the context in which it is used – it would take very little editing for The Long Earth to become suitable reading for twelve-year-olds.

This isn’t a slight on the writing style, nor necessarily a criticism of the novel’s quality as a whole. It’s merely an observation that the Long Earth contains neither enough character profiling, nor enough development of the presumably rampant socio-political issues associated with its concept, to be considered an ‘adult’ novel. As such, pretending to be one now-and-again really doesn’t help its cause, particularly as the core story is so well rooted in a genre that is ever popular with a younger audience. As a novel chronicling an adventure across unknown worlds, The Long Earth is home to enough peculiar creatures, changing landscapes and hidden dangers to allow for discovery, excitement and intrigue to prevail, but whether the authors aimed or settled for this is an issue up for debate.

The novel’s biggest difficulty is that the potential scope of the concept is far too great for a two-part series. While several minimally related plot threads are introduced early on, most have a sporadic presence at best once the main focus of the narrative takes hold. Given the two book constraint, the decision to concentrate near solely on Joshua and Lobsang was undoubtedly the right one, but that doesn’t mean that you, as the reader, won’t spend time wondering how those neglected lives are unfolding in the background.

As much as it seems plainly absurd to criticise a novel for having a great concept, The Long Earth is simply unable to live up to the grandiosity of its loftily ambitious premise. Had it been conceptualised as a significantly longer series, the final result would likely have allowed for a myriad of personal stories and world events to be described in the greater detail that their bare bones suggest they deserve. As it is, The Long Earth makes for an interesting and enjoyable journey, but at its end, the overriding impression will likely be disappointment at all the things you feel you’ve missed.