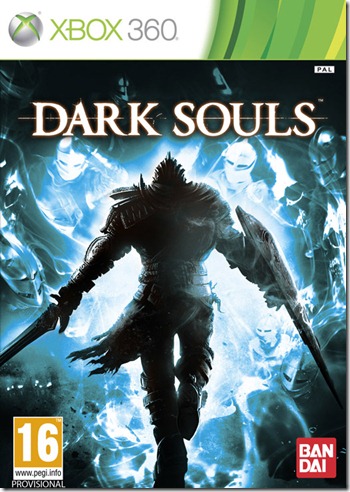 Dark Souls is the spiritual successor to 2009’s cult video game hit, Demon’s Souls. Another quiet success delivered by From Software for both Xbox 360 and PlayStation 3, a PC port containing the additional content Artorias of the Abyss was recently released in August 2012.

Dark Souls is a third person dungeon crawler focused on free roaming exploration, role playing and intense combat. In a game where your death and resurrection are core mechanics, Dark Souls will test your mettle unlike any other.

The game is set in the Kingdom of Lordan, a mysterious and often beautiful world besieged by immense dark knights, powerful magics, dragons, nightmarish creatures and your fellow Undead. You are branded by the Darksign, a ring of fire which means you cannot die, at least not completely. You will die – a lot – and when it happens, the player is returned to the last bonfire they rested at.

Dark Souls, much like Demon’s Souls before it, is a difficult game. Even the introductory Northern Asylum can be overwhelming for players new to the series. It features an opening level which sees the player potentially crushed by a giant cannon ball, decimated by a gigantic demon or falling afoul of another resident in the asylum. However, players are not completely alone in this hostile environment, as orange soapstone messages (luminous foreign characters glowing on the floor) convey the game’s concepts and other general tips.

After battling through the Asylum, players are thrown out into the wider area of Lordan. This is where the difficult, occasionally overpowering journey through Dark Souls truly begins. Offered no real bearing in an enormous world, simply working out the best direction to start off in can be one of the trickiest initial decisions a Dark Souls player will have to make.

Dark Souls has sudden (often intense) difficulty spikes jutting through an otherwise smooth difficulty curve that, depending on the player’s tolerance for punishment, could prove to be briefly insurmountable.

When playing online, the player is connected to the worlds of numerous other Dark Souls players. Sometimes these other players can be perceived as ghosts – wandering through their own world battling their own invisible enemies – and are beyond your reach. When in Human form however, there are a number of ways to interact with these other players.

One option is to cooperate with fellow Undead to explore Lordan and combat the game’s bosses. However, there is also the risk of being invaded by a hostile, crimson spirit; or similarly invading another world with aggressive intent. These duels between players can be hugely polarising experiences. A potentially honourable affair where the participants bow to each other before clashing steel, at other times, these confrontations can be far less civil, with invaders taking advantage of any opportunity to mercilessly attack.

Combat plays a huge role in Dark Souls. Whether it be with a sword, hammer, bow, or one of the game’s awesomely oversized ‘Ultra’ weapons, combat is consistent and entertaining. Each weapon has its own specific move set, allowing the player to invest in a certain strategy and grow to ‘know’ their weapon of choice. Learning the speed, potential reach and capabilities of any weapon is all part of Dark Souls’ deep, immersive combat system that rewards patient and observant combatants.

Similarly, Dark Souls punishes those who are careless with a quick and ruthless demise. Because of this, combat almost always feels fair – whether it be not raising your shield, attacking without an opportunity or just generally being impatient in battle, many deaths will feel self-inflicted.

Some of the lone instances where deaths can feel cheap or undeserved occur when battling one of the game’s many bosses. Due to their sheer size, their attacks easily swat challengers aside – and due to Dark Souls’ unforgiving nature, this often means falling straight into an abyss and instant death.

Lordan is a massive, rich world, waiting to be explored. The viscous swamps of Blighttown, the crumbling Sen’s Fortress and the sprawling lava lakes of Lost Izalith are just some examples of the wide and varying locations Dark Souls has to offer.

Dark Souls is semi-linear in that there are several hub-like areas with other locations branching off them; once the end of the branch has been reached – usually in the form of an aforementioned boss – players have to backtrack and head down a different branch to access a new area. Often some far-off, yet to be explored area can be seen from a vantage point – which is always an oddly enticing view, holding promises of adventures soon to come.

While most of Dark Souls’ exploration is an immersive and painless experience, there is of course the occasional exception. When creating some areas of the game, From Software thought to include what can only be described as borderline platforming segments. These segments, while short and incredibly infrequent, can be absolutely infuriating due to the game’s situationally poor collision detection between the player and the world; a prime example of this being The Great Hollow, a gigantic hollow tree filled with sprawling, intertwining roots that serve as the player’s footing – supposedly. Unfortunately, it is very difficult to actually remain on one of these roots, which leads to many a quick, painful death by plummeting to the base of the tree.

Alongside these sporadic areas, Dark Souls sometimes suffers from a sluggish frame rate. This can happen at any time, whether just exploring or in battle. Due to the seemingly random nature of these drops in performance, it can either be a complete non-issue or a crippling disadvantage.

Lordan is not only home to beasts  and monsters that wish to see your end. There is also a plethora of colourful, interesting characters offering their own side stories that greatly enrich the player’s experience and afford potential role-playing depth through various covenants the player can join. The lack of a constant, flowing narrative in Dark Souls allows these characters space to have their own interactions with the player that are independent and captivating. For instance, Siegmeyer of Catarina tells his tale of a jovial knight trying to regain some semblance of his honour when he makes his intermittent appearances.

Some of these characters also offer the player entrance to ‘Covenants’. These covenants, such as the Warriors of Sunlight and the Gravelord Servants, are factions that players can join in order to get access to special equipment. They also require members to adhere to certain rules and play the game in certain ways; one faction rewards players for invading other worlds and killing players, whereas another encourages co-operative play.

Dark Souls is a wonderful, if sometimes frustrating experience that will capture the imagination and heart of any player that manages to wade through the hostile introduction and overwhelming difficulty. It is a game that goes on to offer players an incredible experience filled with deep combat, in a fantastical world inhabited by fascinating NPCs and fiendish enemies. A definite purchase for those who enjoy a challenge, Dark Souls is an amazing, addictive experience that will immerse, overwhelm and entertain.