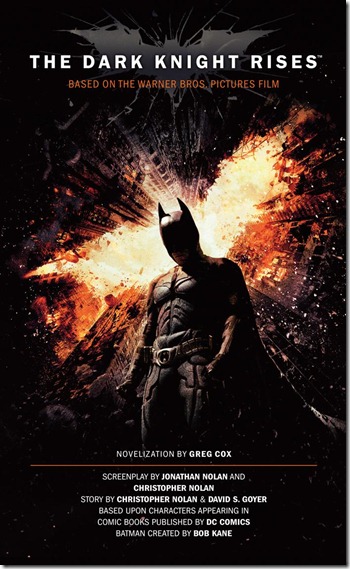 The Dark Knight Rises: The Official Movie Novelisation by Greg Cox adapts Christopher Nolan’s epic conclusion to the Dark Knight Trilogy to the written page. Just like the film it is based upon, it tells the story of Batman facing his most dangerous adversary yet: Bane, a terrorist hell-bent on destroying Gotham City.

Wilson didn’t know what was happening, but he wasn’t about to show it. He still had an interrogation to conduct.
“Well, congratulations,” he taunted Bane. “What’s the next step of the master plan?”
“Crashing this plane.” Bane rose slowly to his feet. “With no survivors.”

The Dark Knight Rises: The Official Movie Novelisation retells the story of the film upon which it is based in a fast-paced, pulpy manner. The writing isn’t particularly descriptive or inspired, but it does move along at a brisk clip that befits the story being told. Those who have seen the film will find few surprises here, although the book format does allow for some slight embellishment regarding character’s thoughts and the reasoning behind their actions.

Of course, the core storyline is strong by default – the film itself was highly accomplished as a narrative and Nolan’s Batman films only feature small bursts of action, with the predominately dialogue-heavy scenes ripe for written adaptation. Everything that happened in the film occurs in the novelisation too – from Bane’s attacks on Gotham City to Bruce Wayne’s return as the iconic Batman – albeit in slightly modified form.

He hurled himself at his opponent, knocking him onto his back beneath the foaming waterfall, where Batman hammered his masked face again and again. Clear water cascaded over them, making the Dark Knight’s black armour gleam slickly. Any normal thug would already be out cold, but Bane just absorbed the blows until Batman took a moment to catch his breath.

The main problem with this novelisation isn’t what it misses out – which is very little – but what it adds. Greg Cox continually refers to Selina Kyle as Catwoman – something director Christopher Nolan was very careful not to do in the film – and often describes how she ‘purred’ or ‘hissed’ her words, lashing out with her ‘claws’. There are also some deviations from the film – the same scenes occurring in different locations for example, or alternative dialogue – that will jar with filmgoers. It makes you wonder if Greg Cox was working from the shooting script or the finished film – the heavily truncated final action sequence involving the ‘Bat’ makes me lean towards the former of the two rather than the latter.

Elsewhere, embellishments to the storyline prove unnecessary. The Joker is mentioned in passing – again, something Nolan chose not to do in the film – but it is later developments that prove most distracting. In any film, suspension of disbelief is to a certain degree necessary – of course, Batman always turns up just in time to save the day. A plot point involving Batman implanting tracking devices into the back of people’s necks when they are sleeping feels silly and forced – and answers a question that nobody was really asking. Spelling mistakes and awkward sentences – such as Blake being misspelt as Black and badly edited passages with extra words left in – also crop up far too frequently.

A hush fell over the pit as the entire prison population watched in suspense. Time seemed to skip a beat. Blood rushed in Bruce’s ears like the flight of the bats. He reached out with both hands…

The Dark Knight Rises: The Official Movie Novelisation, despite unnecessary changes to the plot and some bad editing throughout, provides a decent enough read. What the writing lacks in style it makes up for with pace – and the core story is still a good one. It isn’t a patch on the film, but for Batman fans looking for an easy read – or a way to re-experience the story before the film is released on DVD and Blu-ray – it provides a light, easy read. In short, it’s merely a good (passable) novelisation of a great film – nothing more, nothing less.