BOOK REVIEW – The Art and Making of The Dark Knight Trilogy

The Art and Making of The Dark Knight Trilogy by Jody Duncan Jesser and Janine Pourroy offers Batman fans a comprehensive behind-the-scenes glimpse into the world Christopher Nolan created with Batman Begins, The Dark Knight and The Dark Knight Rises. Featuring text based on in-depth interviews with Nolan and key cast and crew members from all three films, this enormous 304 page, 23.5 x 2.8 x 30.2 cm coffee table book is supported by lavish art and never-before-seen photography.

My time in Gotham, looking after one of the greatest and most enduring figures in pop culture, has been the most challenging and rewarding experience a filmmaker could hope for. I will miss the Batman. I like to think that he’ll miss me, but he’s never been particularly sentimental.

The Art and Making of The Dark Knight Trilogy is as perfectly paced and stylishly executed as the films it discusses. After a series of stunning full-page images that open the book very much like a blockbuster film, the reader is treated to a candid foreword by Christopher Nolan followed by a heartfelt introduction by Sir Michael Caine.

Rather than splitting the book into three parts, one part for each film, Jody Duncan Jesser and Janine Pourroy wisely choose to split the book into three parts based instead on Pre-Production, Production and Post-Production. Each section contains several chapters – for example Chapter 7 (within Production) details the shoot of The Dark Knight Rises – and this allows the book to flow beautifully from one topic to the next without ever repeating itself or drastically changing direction.

Director Christopher Nolan wields the freeze-dried bat-on-a-stick that was used to obtain the on-set visual effects lighting reference that would be used during post-production.
Credit: Warner Bros. Entertainment Inc

The text is written in a dense and highly informative manner, but never feels too dry. Reading the book from beginning to end is like taking a journey back in time with Christopher Nolan through the creation of the entire trilogy, from humble beginnings designing the Tumbler in his garage during pre-production for Batman Begins, to collaborating with Hans Zimmer in post-production for The Dark Knight Rises.

There is always another interesting fact to discover or new secret to be revealed, as Nolan shoots as much in-camera as possible. Whereas many filmmakers today rely on computer effects and CGI, Nolan tries to do as much for real as he can. This approach doesn’t just enhance the films – it makes this book an essential accompaniment that chronicles the enormous amount of creativity and talent that each person involved with the film brought to the table, from cowriters David S. Goyer and Jonathan Nolan, to cinematographer Wally Pfister and special effects supervisor Chris Corbould. 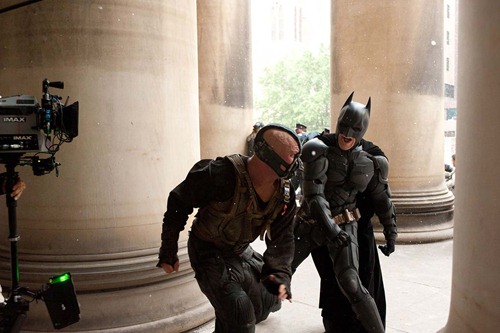 Heath Ledger insisted that he put on his own lipstick as the Joker – he felt that he needed to do that, as part of the character. Anne Hathaway went into a meeting with Chris Nolan ‘sort of dressed up as Harley Quinn’ – the role was actually Catwoman and she’d misread the whole thing. During the filming of the eighteen-wheeler truck flip on the set of The Dark Knight, special effects supervisor Chris Corbould was so worried, he stepped into a side street and simply listened rather than watched. These facts convey just a miniscule fraction of the insight offered into each film by The Art and Making of The Dark Knight Trilogy.

Any complaints are simply nitpicking – the book is so thick that sometimes the centres of double-page spreads are lost, and the ‘Art’ in the title is slightly misleading as the majority of the images are actually photographs. Again, such complaints are a stretch. The Art and Making of The Dark Knight Trilogy is a comprehensive guide to one of the greatest film trilogies of the 21st Century. The insight offered is unparalleled and the book itself is a true work of art – it not only offers fascinating insight into each film, but actually manages to improve repeat viewings. Fans of Christopher Nolan’s Batman owe it to themselves to check this out – an essential read that leaves no stone unturned.

“I’d love to claim that I invented the whole thing,” he said, “but I did not. I was just given a very precious thing to do my best with and look after. And that has been a great privilege.”

The Art and Making of The Dark Knight Trilogy is published by Abrams.