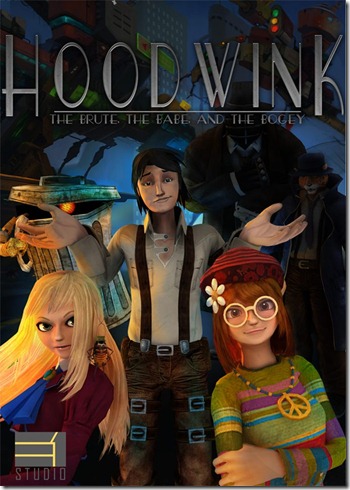 Hoodwink is a cel-shaded point-and-click adventure game created by Kuala Lumpur based indie developer E-One Studio. Players take on the role of Michael Bezzle (M. Bezzle – get it?), an acquisitions expert – aka small time thief – who is trying to propose to his girlfriend in a futuristic city ruled by the all-powerful corporation Unicorp. Although it isn’t explicitly stated, Hoodwink is the first episode of an episodic series and is available exclusively on PC via EA’s Origin service.

Hoodwink seems to tick all the right boxes upon first glance. Cel-shaded graphics can be beautiful when used properly – who can forget 2003’s The Legend of Zelda: Wind Waker? Voice acting is also important in video games, particularly those of the adventure variety – Hoodwink’s cast of unknowns do a grand job of voicing the oddball variety of characters that inhabit the world of Global-01. Also, oppressive futuristic settings – Beneath a Steel Sky – and noir sentiments – Grim Fandango – have often proven popular within the adventure genre over the years. So… why does Hoodwink completely fall apart at the seams before it has even begun?

It all begins with a clever Hoodwink being played on the player – at least those who haven’t read the game’s synopsis beforehand. Michael Bezzle is in an office, searching for some matches to light a cigar to go with his drink. He seems every bit the hardboiled, cocksure private eye. That is, until the real owner of the office – a disgruntled fedora and trench coat wearing humanoid leopard by the name of Detective Pyre – bursts in and sticks a gun in Michael’s face. It turns out that Michael is actually there to steal a ring. He soon escapes and the game begins proper. Unfortunately, the opening is the best part of the entire game. 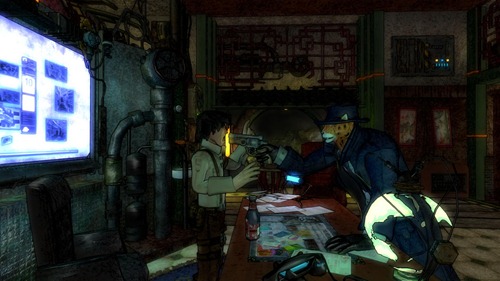 Hoodwink has cel-shaded graphics, yes – but they’re some of the murkiest this reviewer has ever seen. They’re blurry, muddied and lack any real sense of coherence. The same can be said of the controls – they’re dreadful. Hotspots – of which there are admittedly very few – often surround an object so generously that you’re never quite sure what you’re actually clicking on. Changing the viewpoint within a room isn’t done automatically either – each room has multiple ‘exits’ that simply show a different viewpoint when clicked upon. It’s a nightmare of epic proportions simply to manoeuvre Michael throughout the world – especially when real exits that take you to new locations often don’t display any icon at all.

These problems are compounded by an overall lack of polish and general optimisation – the game will slow to a crawl in certain locations for absolutely no reason and the load times are excruciating. When you’ve just completed the PC version of Alan Wake with all its graphical options set to full without a hitch, yet Hoodwink comes within an inch of killing your system, you know there is something going seriously wrong. This lack of polish even extends to the text on screen – when you’re fighting the controls and the ‘hint’ system keeps directing you to the gound floor, it’s enough to make you want to scream. 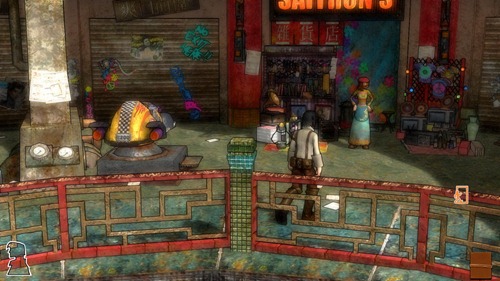 Which is a shame, as Hoodwink has some great characters that are written and voiced to such an impressive standard that they often evoke genuine laughter – particularly the aptly named ‘Second-Chancers’, robots with the brains of real people. The red cyborg Brycke Shitehausen immediately springs to mind, as does Rubbish, the brain of a once wealthy man trapped in the body of a trash can.

It’s also a nice change of pace to be collecting items so that you can propose to your girlfriend – the fact that she is in a wheelchair is dealt with beautifully and this unusual romance intrigues for all the right reasons. Plus the jazzy soundtrack composed by the award-winning Leon Willett is pleasant enough – a shame then that it’s limited to only a few tracks and often stops playing at random intervals, leaving only uncomfortable silence in its wake. 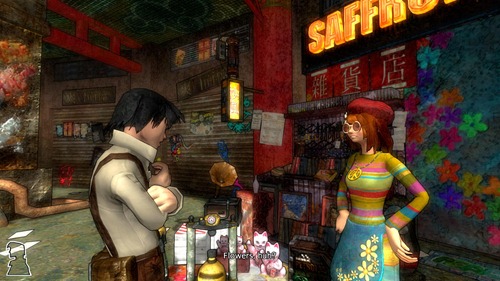 Adventure gamers will desperately want to like Hoodwink – the story, setting and characters certainly have potential – but as a game, it unfortunately only succeeds at crashing and burning. The controls are barely functional, the mini-games are pathetically limp and the graphics look like they’ve been smeared with a healthy dose of Vaseline. For £9.99, you’re getting a 30 minute game stretched out to a couple of hours simply because it’s so difficult to control and interact with – sometimes a hotspot won’t even offer a response. It all just feels incredibly unpolished, unfinished and uncooperative. Ultimately, Hoodwink is a good idea buried beneath a bad game – and stolen ring aside, that’s the greatest crime of them all.