Batman: Arkham City is the much anticipated follow-up to the 2009 surprise hit video game Batman: Arkham Asylum, once again brought to you by British developer Rocksteady Studios. At the beginning of the game Bruce Wayne (aka Batman) is captured and imprisoned in the titular Arkham City, a sprawling super-prison five times larger than Arkham Asylum, which is being overseen by genius psychiatrist Hugo Strange. Meanwhile, the Joker is facing almost certain death due to his recent consumption of the Titan formula, its unstable properties mutating his blood and slowly killing him…

Batman: Arkham City takes everything that worked from its superb predecessor and thoroughly refines it all, before adding a multitude of new features and increasing the game world’s scope tenfold. This is about as big a leap as you can get between two video games on the same generation of hardware. Whereas Arkham Asylum was a mostly linear affair, Arkham City allows the player to explore a large portion of Gotham’s filthy streets and towering rooftops whilst tackling sidequests alongside the main story.

The narrative focuses once again on the ongoing battle between Batman and the Joker – although this may initially seem more like a subplot, it is a struggle that prominently weaves its way throughout the entire game. The Joker is very ill, and for reasons that I won’t spoil, Batman must help him find a cure. He must also figure out what Hugo Strange’s rapidly approaching ‘Protocol 10’ is, and prevent it. Concurrently, other villains such as the Penguin (unrecognisably voiced by the super-talented Nolan North) and Two-Face are at war over turf and power.

Not long after being captured and incarcerated as Bruce Wayne in a highly cinematic opening sequence, the Dark Knight escapes and has Alfred Pennyworth deliver his crime-fighting equipment to him via an airdrop on a nearby roof. Once the player is back in their familiar Batsuit, they have immediate free reign of  Arkham City. Of course, some indoor locations can only be entered as the main storyline progresses, but players can easily cruise around fighting crime, tracking down serial killers and undertaking AR (Augmented Reality) training if they so wish –  the latter option comes highly recommended, as it offers an essential yet easy to overlook upgrade that makes gliding between buildings – and beyond – much more fluid and fun.

Those who wish to dive straight into the main campaign will soon find themselves at the old city courthouse rescuing Catwoman from Two-Face and his gang, before dodging a sniper bullet shot by the Joker and tracing its trajectory back to his current whereabouts… and this is only the beginning. Although this is a much more open game than Arkham Asylum, it doesn’t attempt to rival traditional open world games such as Grand Theft Auto IV or Infamous. However, this isn’t a criticism at all. Despite a much more expansive approach than the first game, Arkham City remains tightly focused and maintains an extremely high level of quality throughout. The city may not be staggeringly huge, but each area is well-defined and feels lived in, weather-beaten and decayed. There is a real sense of history to the environment. 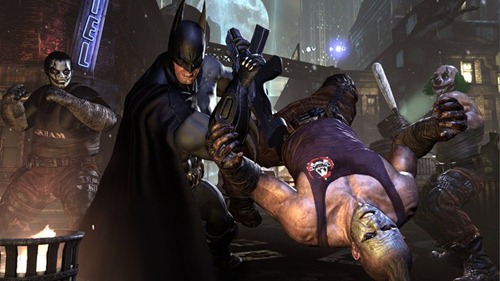 The combat in this follow-up is as fast paced, brutal and fluid as ever, if not more so. Through a mixture of punches, kicks and counterattacks (you can now counter up to three thugs at once!) Batman will quickly lay waste to any would-be attackers. This is a combat system that rewards calm and restraint; bashing buttons is nowhere near as effective as rhythmic, carefully-timed button presses. Batman can even throw gadgets into the mix, with the BatClaw/clothesline move feeling especially satisfying to pull off. The higher your combat multiplier the more experience points you will gain, which can then be used to buy/upgrade a wide range of abilities once your level increases. This will make each player’s game slightly different and also encourages multiple playthroughs.

Stealth is the alternative approach to fist fighting and is often a necessity: Batman won’t last long if he is surrounded by several gun-toting criminals. A quick smoke bomb will block your retreat as you use the Grapnel Gun to reach higher ground before picking them off one by one. Boss fights are spread out but usually follow a set pattern. Somewhat bizarrely, fighting common thugs on the streets can often be more challenging than fighting a bona fide villain, although the boss fights are cinematic enough to mostly smooth over this complaint.

Newly bought copies of the game come with a DLC code for additional Catwoman missions, which once unlocked will slot themselves throughout Batman’s adventure. The game actually starts with a short Catwoman mission so it is advised that players install this DLC before playing. Controlling Catwoman is unique enough – crawling on ceilings, whipping your way up the side of buildings – to offer a fresh change of pace whilst still retaining the exact same control scheme.

Unreal Engine 3, upon which the game is built, pumps out some of the best multi-format graphics yet seen in a video game. This is no doubt helped along by the superb art direction, with only some minor side characters suffering from a slight lack of visual polish. The voice acting brings the game even more alive, with Kevin Conroy and Mark Hamill reprising their roles as Batman and the Joker respectively to standard-setting effect. The heroes and villains of Batman’s world come alive despite the lack of character development – there is quite a lot going on in Arkham City and this unfortunately means that many appearances feel like cameos rather than fully fleshed out inclusions. Regardless, players will be hard pressed to find a technically superior title this year – Uncharted 3 may be prettier, but we must remember that it is a far more linear game too.

Despite being such a well-rounded game, there are some minor complaints. As previously mentioned this sequel is so jam-packed full of characters that it sometimes feels less focused than Arkham Asylum, which always had the Joker at the forefront of the experience. By comparison Hugo Strange simply can’t compete. Gameplay-wise, Batman still mostly uses his brawn rather than his brains and the detective mode isn’t really developed as much as it could have been. Also, there are some plot holes and the main storyline can be breezed through rather quickly. Luckily, there are multiple sidequests – each as fully formed as the main missions – and with over 400 Riddler Challenges, there is plenty of content for both Batman and Catwoman to discover even after completing the main game. As well, there are many different combat challenge rooms available to tackle from the main menu at any time.

Batman: Arkham City is a tremendous sequel and an incredible game. Arguably offering an even more superior Batman experience than the recent Christopher Nolan films, fans of the Dark Knight and his extensive comic book universe couldn’t have asked for more. Sadly, Mark Hamill has confirmed that this will be his last ever performance as the Joker – a true shame, although it makes possible an ending that is memorable, hard-hitting and strangely poignant. Rocksteady Studios have not only created one of 2011’s best games, but the greatest superhero video game of all time. Essential.