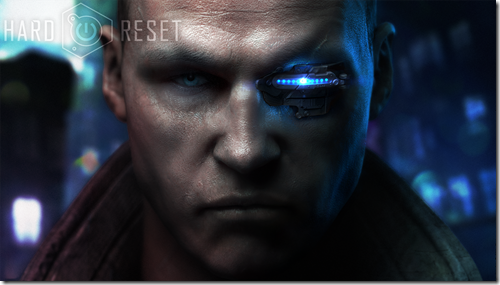 Hard Reset is a fast-paced, old-school first-person shooter developed by Flying Wild Hog. Set within a dark science fiction setting, players take control of Major Fletcher, an Army Combat Veteran and soldier of the CLN, as he battles through the only remaining human city of Bezoar. Due for release on PC in September 2011, Flying Wild Hog recently provided AMO with a four level preview build. Read on to find out more!

Hard Reset is a PC exclusive, which is actually somewhat of a rarity these days given the dominance of the current-gen consoles. Playing the preview build feels like booting up an old-school shooter – think Doom or Quake – with a fresh, current-gen lick of paint. Duke Nukem Forever failed to harness that classic feel when it was recently released. Hard Reset on the other hand absolutely nails  it.

How does it play?

Hard Reset only allows the player to carry two guns at once. However, Halo this most decidedly ain’t. You start with two guns and they’re the ones you stick with throughout the entire game. However, this isn’t as limiting as it initially sounds. Special kiosks allow you to upgrade each weapon (an assault rifle and an electricity gun) so that they can perform in several different ways. For example, after installing the relevant upgrades the assault riffle can quickly transform into a shotgun, or a grenade launcher. Likewise, the electricity gun can send arks of electricity flying through the air, or shoot electricity bolts at enemies through walls…

The enemies – a variety of different robots – come at you thick and fast, never simply holding back or standing still like they would in many other shooters. The player has to constantly keep on the move and use the environment to their advantage. Explosive barrels are littered everywhere – predictable stuff – yet the real fun comes from using electricity on environmental items such as ATM machines and cars, causing a chain reaction of mayhem and destruction. Hard Reset offers a hint within its title. It’s tough as nails even on the easy difficulty setting and newcomers to this type of shooter will face a steep learning curve. Checkpoints are sparsely spaced out and real skill is a necessity to survive and advance.

How does it look and sound?

For an indie production from a small independent Poland-based studio, Hard Reset looks amazing. The most obvious comparison is with the film Blade Runner – the game even features a futuristic blimp cruising through its night skies. There is plenty of detail in the environments and, although they are essentially pretty backdrops, the visuals go a long way towards making the linear levels feel more alive and expansive than they really are. The various screens and monitors you can interact with also steal the cool user interface from Dead Space 2, allowing the mouse to become a regular cursor where necessary, before quickly turning back into a crosshair again afterwards.

The cutscenes are drawn in a graphic novel style that is very similar to the ones used throughout Metal Gear Solid: Peace Walker. The voice acting is solid enough however the storyline falls quite flat. It felt impenetrable as I played the preview build, although to be fair the four levels were taken from various points throughout the game and were therefore experienced out of context. Of course, the real stars of the show are the old-school gameplay and high-end visuals, but it is a shame that the narrative currently feels secondary at best and throwaway at worst. The music does its job and not much else.

Hard Reset is an old-school shooter that makes no apologies for itself: it certainly feels refreshing to find a game in 2011 that features health and ammo pickups scattered upon the floor throughout its levels. In many ways, playing this preview build felt like a blast from the past, from a time before first-person shooters started featuring cover systems and focusing on multiplayer modes. Hard Reset is shaping up to be a visually splendid, hardcore shooter that unashamedly wears its heart on its sleeve.