Beyond Good & Evil is an action-adventure video game that was first released in late 2003 for GameCube, PlayStation 2, Xbox and Microsoft Windows. Developed by Michel Ancel – the creator of the Rayman video game series – at Ubisoft’s Montpellier studios in France, the game follows an investigative reporter named Jade as she uncovers a planet-wide alien conspiracy on the mining planet of Hillys in the year 2435. A HD re-mastered version of the game was released on Xbox Live Arcade in March 2011, followed by a release on the PlayStation Network in June 2011.

Beyond Good & Evil was a commercial failure upon release despite critical acclaim, so the chance to revisit the game in HD is certainly a welcome one. For many players, this will be their first introduction to Jade and her investigations upon planet Hillys. The game opens at Jade’s lighthouse, an orphanage of sorts, where she and her uncle Pey’j – a boar-like creature – are taking care of the children of Hillys orphaned by the aliens known only as the DomZ.

Before long, the shield that protects them fails and the DomZ attack from the skies. The player is quickly introduced to the game’s simple combat mechanics as they tackle the DomZ, with Jade using her Daï-jo combat staff to attack, sidestep and retreat as the game cinematically uses slow-motion to brilliant effect. Players can also hold down the attack button to charge their attack power. When Jade is joined by Pey’j or another ally, she can get them to perform a special move – with Pey’j it is a ground slam – to aid her during combat. 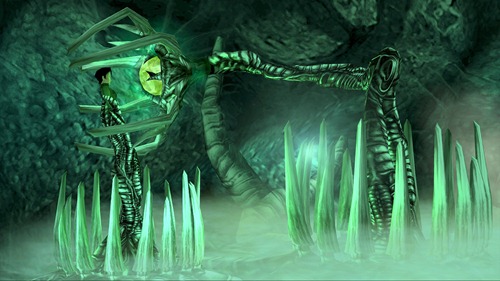 Beyond Good & Evil does a great job of introducing its various mechanics without needing mood-breaking tutorials. Upon defeating the very first boss right at the beginning of the game, the player receives a pearl. These are collected throughout the game to upgrade the Hovercraft, which is used to travel across Hillys. You can also earn these pearls by using Jade’s camera, cataloguing all of the species of Hillys for a science museum that will reward you for every roll of film you submit.

It isn’t long before Jade is recruited by the IRIS Network, who suspect that the Alpha Sections – a military dictatorship promising to defend the populace from the Domz – are actually behind the planet-wide disappearances that have been taking place. Jade is sent out on a variety of missions throughout the game, where she has to fight, sneak and photograph to achieve her goals and uncover the truth. 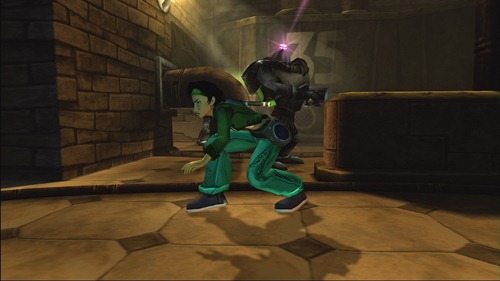 Although the combat is basic, it still works well even in 2011. Fighting is quick and straightforward, with boss fights adding a little more flavour. However, the sneaking sections have aged quite badly. Towards the end of the game the player’s timing must be perfect and being spotted is often impossible to recover from without simply letting yourself die and starting again.

The camera angles don’t help either. Most of the time you can rotate the camera with the right analogue stick, yet sometimes the game takes full control instead, forcing fixed camera angles that are often confusing and downright frustrating. Although this is still an issue that plagues many modern video games today, it is a shame that it is so prevalent throughout Beyond Good & Evil.

Graphically, Beyond Good & Evil holds up remarkably well. The art style was noticeably gorgeous even in 2003 and the HD upgrade helps make the game look even better. Although it could never be mistaken for a modern release, this HD re-master breathes new life into an aging game. Of course, PC gamers have arguably been playing this game at HD resolutions for years, but it is nice to have the same option available on current-gen consoles. Sadly, towards the end of the game there are some epic moments that don’t look quite as good as they should, with low-resolution textures damaging the intended sense of scale. Overall though, things look pretty great.

The voicework is superb, with Jade (voiced by Jodie Forrest) and Pey’j (voiced by David Gasman) both offering standout performances, as well as conveying great chemistry when performing together. The soundtrack composed by Christophe Héral is also highly memorable, incorporating a wide variety of languages and instruments from around the world to perfectly match each location. In fact, this may well be one of the greatest video game soundtracks ever made. It’s so good that it completely transforms the entire experience.

Beyond Good & Evil HD deserves to be played by gamers everywhere. The Studio Ghibli-esque art style is beautiful, offering a unique blend of fantasy and science fiction in a world where anthropomorphic animals coexist with humans. The story, characters and overall experience remain gripping throughout. The gameplay itself can feel dated at times and that does sadly betray Beyond Good & Evil’s age, but don’t let that put you off too much. This is a classic that deserves to be rediscovered despite its shortcomings, with an ending that is both emotionally charged and poignant. Let’s keep our fingers crossed for Beyond Good & Evil 2!