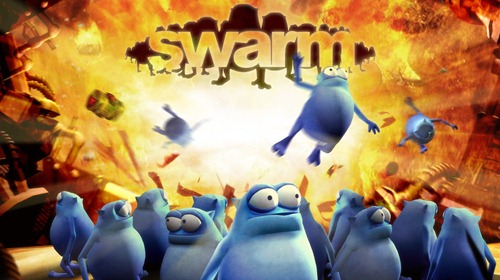 Swarm is an action-platform game developed by Hothead Games and published by Ignition Entertainment. In the game, players must take control of up to 50 ‘swarmites’ at once, collecting DNA throughout a variety of levels to help their ‘momma’ grow. Released via XBLA and PSN, AMO’s review will focus on the PlayStation 3 version of Swarm. 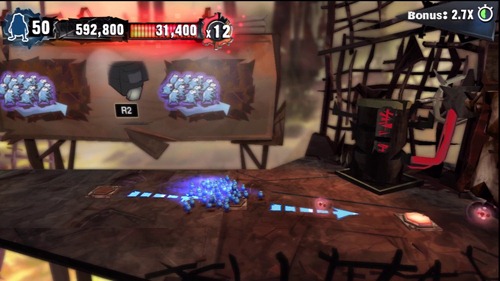 Swarm is a game that revels in cartoon violence. The swarmites are small, blue, blob-like creatures that die very, very easily. Before playing, I spent several minutes on the main menu simply pressing the Triangle button (which is labelled in the bottom right hand corner of the screen with the warning: DO NOT PRESS), watching swarmite after swarmite fall foul to some hilarious, over-the-top demise. I just couldn’t stop pressing that button!

Sadly, this immediately made the game itself seem inferior: you will never see the little fellas that close-up during regular gameplay, robbing the violence of its visual oomph. Instead, the action is shown from a distance, with the player controlling up to 50 swarmites at any one time. Initially this can feel slightly odd, but soon enough it becomes apparent that strength in numbers is definitely a virtue in Swarm.

Movement is achieved via the left analogue stick. Holding R2 huddles the swarmites together, whilst pressing and then releasing R2 gives a small boost when running. Holding L2 spreads the swarmites outwards, which comes in handy when collecting lots of points at once. The X button makes the swarmites jump (tap for short jumps, hold for longer ones), or can be used when huddled to make a tower of swarmites. Pressing L2 and R2 in unison triggers a dash attack and the Circle button is used to interact with certain mechanisms/items in the world.

The gameplay is mostly a race to the finish line, with the swarmites collecting points for as long as possible to build up multipliers which will in turn drastically increase the player’s final score for the current level. Swarmites dying also helps to keep the score count going, encouraging players to sacrifice the little blue guys as they play. Many swarmites will die within each level (it is impossible to keep them all alive for very long anyway) and the game acknowledges this steady stream of death with humorous ‘Death Medals’ and detailed stats screens. 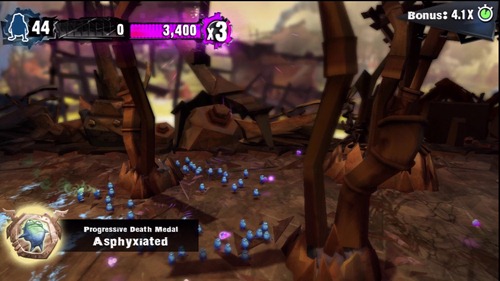 The graphics do a good job, but there is very little to note design-wise. The levels are all pretty much the same, with drab colours dragging down what should have been a far more colourful experience. The swarmites themselves are simply designed and have very little personality: compare this to the wonderful ‘goo balls’ in World Of Goo. The music and sound effects can sometimes become rather annoying too, with very little variety. This makes the sense of progression noticeably weaker: there is simply less incentive than usual in games of this type to continue onwards.

You can’t progress to the next level without reaching a certain score in the previous level, so hardcore gamers will definitely get a  kick out of perfecting their scores. There are checkpoints in the levels, but they become useless later on anyway because, without a clean run-through where the player doesn’t lose their multiplier, they will never get a good enough score to progress. 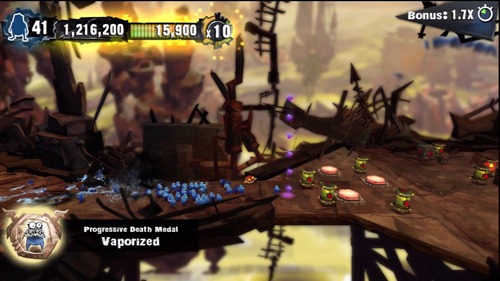 Therein lies the problem with Swarm: fairness. The controls should be tight to accommodate the high difficulty, but the use of the L2/R2 buttons always makes things feel slightly too loose. There are even two face buttons (Square and Triangle) that aren’t used at all and remapping the controls yourself isn’t possible. Players are encouraged to sacrifice their swarmities as they race through the levels, but some of the more interesting mechanics require a generous batch of the little guys and the luxury of taking your time… which you seldom have. LocoRoco for PSP did this sort of thing far better way back in 2006.

With stronger design choices – and selectable difficulty levels – Swarm could have been a little gem. Instead, it is an occasionally enjoyable oddity. Many players will give up halfway through because the game won’t let them progress unless they have made zero mistakes in the previous level. On the rare occasion when everything just clicks into place, there is a definite sense of excitement as you race towards the finish line. Unfortunately,  the lack of variety, practically non-existent storyline and unforgiving gameplay soon make progression feel like a chore. Admittedly fun at first, Swarm is ultimately too frustrating to be described as anything but disappointingly average.