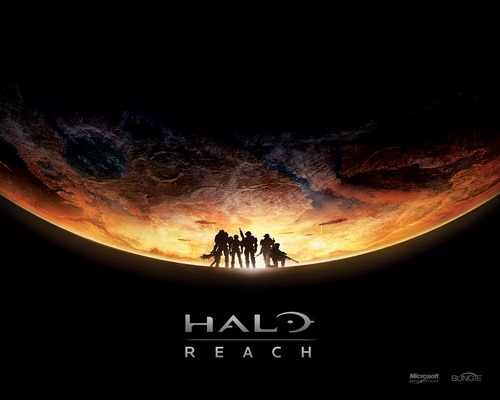 The Electronics Boutique near me has good people working in it. They give me fun information all the time, sometimes when I don’t even ask them for it! Recently I heard them saying that Halo: ODST was walking out the door. Why? Because a rush of people wanted to play the new Multiplayer Beta of the upcoming game Halo Reach, and the lesser-liked Halo 3 prequel was needed to run it. Fun because it’s true.  Back in its hey-day, more than a million people played Halo 3 online within 24 hours of its release. These days, it’s earned the new moniker of Galo (not pronounced Gah-lo either). As a first person shooter, it has fallen from its former glory. 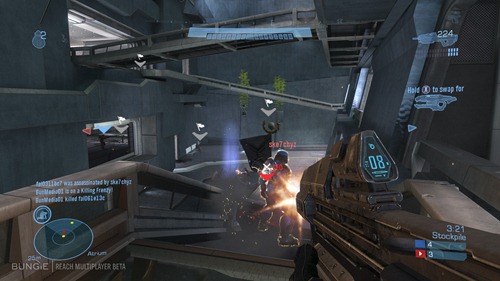 It’s really not hard to see why. Let’s look at Modern Warfare 2, Gears of War, and a typical third title in the same vein that I can’t think of at the moment. You get the idea though – the modern standard for an online shooter is to have the sharpest, spiciest graphics available. You need to move more realistically. React more fluidly. Have greater customization than just your helmets and shoulders. Halo 3 sadly doesn’t cut it anymore. Hell, there’s an even greater number of nitwits on the Ranked Playlist that scream “Veto!” and abuse than there once was.

And so, Bungie put their flagship game on the table and carefully pulled it apart. Each and every piece of the game and its engine has been replaced, revamped and rebuilt. Halo Reach (set to arrive in September) may be a prequel, but it’s got more advanced controls, armour and reactions than our beloved Master Chief ever had. Since it’s a prequel, I’m almost offended by that… but let’s get to the brass tacks. We’re previewing the multiplayer aspects, not the story.

The first thing I noticed were the new option screens. Featuring 3D scenes of the planet Reach and multiple battles in the background, the menus have become sleeker and sharper. Your player’s details are available at any time on the right side of the screen, and clicking over to it gives you the standard preview of your character that used to only be available in the customization screens.

Speaking of customization, wow-wee. I was first off given a bog standard Private ranked soldier in pink armour. So clearly, that had to change. This time, we’re given control of a Spartan-III. Instead of just a few simple helmet choices, there’s a bunch of different options for each design. So, you like that new CQC helmet, eh? That can come with an optional UA armour attachment, but for a little extra cash you can acquire a HUL uplink for those sensitive operations.

Of course it’s not that simple. You’ll need the right rank to show off your new UNSC accessories, and that aforementioned cash (or  credit as it’s known in game) is the new EXP base. Getting medals, performing above expectations, staying until the end of a match and better yet, winning, all give you varying amounts of credit. Finally, a game where I may just play the multiplayer before the main story!

These armour upgrades aren’t just for show either. Some will specifically enhance your Spartan in unique ways. If you choose to fight with a certain theme, filling up on additional armour and uplinks to compliment that will go a long way towards victory. On the other hand, storm into battle wearing Scout shoulder pauldrons (designed to enhance stealth) when you prefer to strap on a jetpack and rocket around? Not much point to that is there. However, airborne fighters CAN wear a pair of FJ/PARA pauldrons, designed for extra protection without sacrificing weight. Clever thinking. Some of these attachments will also tap into your suit’s loadout battery – stockpiling on extra functions will make your charge drain quicker, so use what you have wisely, or rethink your set up. (Editors Note: It has since been brought to AMO’s attention that only loadouts directly affect gameplay: armour choices etc are purely cosmetic. Apologies for any confusion caused!)

Speaking of those loadouts, let’s take a gander at them. This is the first clear sign that Bungie is having a sneaky go at stylizing Halo to look like other modern FPS’s. Each time you spawn in a game, you’ve given a quick choice of what you’d like for a secondary function.  The choices available are different from each match type, but the main sets are:

Each loadout has its ups and downs. The stealth function, since it refracts light around you, plays havoc with your radar and tricks you into seeing a dozen enemy units when there’s only a couple nearby. Another cool point is that the cloak becomes less effective the faster you move. Run behind someone and they’ll see that shimmer easily. Hide near a flag however and you can bash them over the head as soon as their back is turned.

Speaking of the radar, it’s been freshened up too. Now it displays weaker, faded targets when they’re above or below you. The brighter and bolder the dot, the closer they are to you, so start paying attention to the stairs nearby. If it’s the same size and definition you’re used to, someone’s about to strike very close to home. 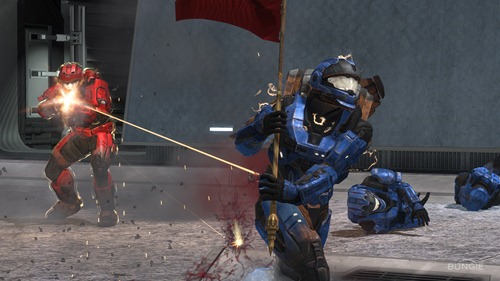 It’s a far cry from the usual Halo methods of fighting, and it almost seems unfair that the Chief didn’t have the same technology. To be a stubborn jerk though I remember that this is a prequel, and hey, the Chief still outlived these Spartan-III’s, but I digress…

Halo Reach also seems to have a longer lasting lifespan with its troops. Apart from a strong shield we’ve all seen, an additional bar (which doesn’t regenerate) shows your basic health. Both have to be depleted to lose a life. Between the usual melee bashes and firing of weapons, it just seems to take that little bit longer to take an opponent down. Whether this is due to the Spartan-III’s strength or prequel weapon weaknesses, I’m not too sure. Just don’t be running away until you’re sure that guy’s dead. You’ll be surprised. A lot.

One thing I appreciate quite a bit are those prequel weapons that I just mentioned. It’s really easy to see a prequel game with some super duper weapon that you can’t help but think “Wow… why weren’t these available in X year’s time? It would’ve made the first game a lot easier…” Thankfully, Bungie have looked at these games too and thought the same. The classic, beloved battle rifles are there, but this time reduced to a single shot instead of the barrage of three. The Spartan laser’s early model comes into play with a shorter battery – only four beams can be fired before the entire weapon becomes disposable. The Needler is back with a vicious looking ammo caddy. It really looks and feels like a weapon that’s big and brutal, an ancestor of the sleeker and polished Needler in Halo 3. The Devil is in these details, people.

A lot more weapons come to light in Reach, like a Needler-based Battle Rifle, a predecessor to the Carbine. It’s bigger, uglier and scarier, but does the same basic job. It’s a tad slower but with satisfying results. You can handle it and think “yeah, this’ll do for now, but I can see how this get’s phased out later on.” It has that realistic feel to it that’s just oh so suitable for the game.

So far, I can play this beta and almost ignore that it’s Halo. The armour is there, but it’s got such a different look and feel that it could just be any old type of gear. The weapons are there… but all FPS games have a similar, universal set of weapons. You have to sometimes look very hard to see the same UNSC world that Bungie have been riding for the better part of a decade now, but even if you can’t, it’s fine. It’s so sleek, polished, and new, that you’ll want to play it anyway. Old fans will clamber to finish their old titles to be ready for when it drops, and new players will be drawn to it for the experience it promises to deliver. And so far, deliver it has.