What do the Monopoly guy, Tears For Fears and Bungie have in common? They all want to rule the world of course, and Bungie is getting closer all the time. What started as a system release game, Halo has grown into one of the biggest franchises of our time. It is also bringing video games into every medium it can. You can now buy Halo toys and games, Halo novels, comics, and you can even wear Halo clothes while playing O.D.S.T. and waiting for the new Halo Reach to hit shelves. It therefore wasn’t very surprising to hear that there was going to be a series of anime/CGI films based on the franchise (the only surprise was that it took them this long!)

Halo Legends will be coming to DVD and Blu-ray this February, featuring seven short films based within the Halo universe. They will include insight into the origins of Spartan program and the life of an Arbiter, and even show us how Cortana is spending her days after the end of Halo 3. Personally, after hashing through three games with the one Hero/A.I. Partner, I wouldn’t mind seeing 117 be brought back into action instead of all these spin-offs and prequels we’re receiving, but maybe that’s just me.

The different animations are classified as short films and come from different studios and directors. They each use their own style too, which leaves a couple as anime, a few cel-shaded, and the rest a nice blend of sharp Xbox 360-styled CGI. While the collection release is still a little over a month away, the first few episodes have already appeared for a limited time on the Xbox Live application Halo Waypoint. It’s this release that we’ll be focusing on for part one of the AMO review of Halo Legends. Warning: Spoilers Ahead…

My least favourite of the films, The Babysitter is less of a Halo short and more like Japanese anime hijacking the franchise. It is a short film about a team of O.D.S.T.’s (Orbital Drop Shock Troopers) being sent on a mission to scout out a sniping position on an enemy-run planet. Their goal is to take out a high-ranking leader, throwing the planet’s occupancy into chaos. However, they are forced to work with SPARTAN Cal-114. If you’re not up to speed, there’s a (one-sided) rivalry between O.D.S.T.s and the Spartans.

The main O.D.S.T. in the story is O’Brian – the team’s self-declared “best sniper” and more than a little put off that he’s now playing back up to the big green cyborg. He’s also a cocky brat with gravity-defying hair that’s either messy brown or bright maroon (it’s hard to tell, really). Throughout the episode, the team attempts to make it to their sniping position – O’Brian getting into more trouble than is needed before Cal-114 pulls him out of it.

When they do finally reach the spot, they’ve been followed by a huge Brute that is about to bring O’Brian’s head off with a Gravity Hammer swing. Cal-114 takes the blow instead, and the O.D.S.T. team quickly push the hairy monster over a nearby waterfall. It’s here we find out that Cal is a woman, with long blond hair (that fell with no tie, so was just tucked up under her helmet), and pert, pretty features. She’s also losing blood from her head injury and she’s breathing quite heavily, before urging O’Brian in an emotional voice to take the shot, as only he could possibly do it. He does, and Cal soon dies afterwards. The Team is rescued, and we’re treated to a quick moment of inner-reflection as O’Brian tightens his lip at a comment made against Spartans later on.

Looking back on the episode, if you squint hard you can see Halo in there – 114 is big, powerful and a silent protagonist like most Spartans, just like O.D.S.T.s are a less formal group of marines. Oh, and the Covenant look pretty spot on too. You can’t see any of this however without the bigger parts being forced on you – O’Brian’s over-the-top, anti-Marine hair and attitude coupled with the big bad hero turning out to be a pretty woman (who as soon as she’s unmasked speaks more openly than any Spartan before… ever) is just too Japanime. Just too much.

This story revolves around an Elite (or Sangheili) with the rank of Arbiter. This warrior, Fal ‘Chavamee, doesn’t believe in the ideals of the Covenant however. In fact, he speaks out against it and refuses to accept the religion, marking himself as a heretic. While he is an effective leader of Elites, he believes that the Sangheili were a more proud race before joining with the Covenant, and comments that they have now become corrupt with their search for power.

These actions soon bring him dire consequences, as a High Prophet chooses another Sangheili to duel the Arbiter, wishing the heretic to be killed. This other Elite, a huge fighter named Haka, soon travels to Fal’s home and murder’s his wife, leaving the bodies of her and his friend behind. Upon finding them, Fal ‘Chavamee accepts Haka’s duel.

The story is told out of sequence, and is interrupted by a massive battle of the Arbiter tearing through Haka’s army of Covenant forces (which occurred on his way to the duel). A bloody and exhausting frenzy, the action often splits away to show the past sequences, setting up the story and how it all led to this. Despite being only one person, Fal ‘Chavamee is victorious, and goes on to fight Haka.

Much like The Babysitter, The Duel is full of Japanese cultural references. The early scenes of the Arbiter’s home life show him wearing kimono styled robes and having a  very traditional Japanese house. Several of the Sangheili’s armour also looks a lot like a Spartan’s Hayabusa suit, leading to a Samurai – style of equipment. These short films are all considered part of the Halo Canon however, so let’s overlook that. The main story of The Duel is an origin point: after Fal ‘Chavamee’s actions, the Arbiter rank lost all of its meaning, becoming only a mark of shame for its wearers.

Since Halo 2 there have been some huge fans of the Elites, and this film is a nod and a thank you to all of them. Standing back and watching it as a basic fan, I found it interesting, but not enough to want to watch it again. 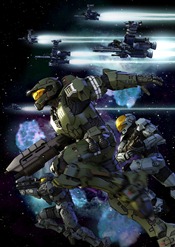 Now we’re talking! The Package could be a cut scene right from a modern Bungie game. A prequel story set in the early stages of the Human-Covenant war, The Package showcases one of John-117’s many victorious missions, working with his original teammate Kelly-087 and fellow Spartans Frederick, Arthur and Solomon.

Right away, the film starts with the team being briefed on their mission: using boosters, shoot out to a fleet of enemy ships, board a vessel, and retrieve an important ‘Package’. If this cannot be completed in a very small time frame, the UNSC ship will have no choice but to open fire and destroy the enemy fleet, the Package, and the lagging Spartans as well. The team accept this and jettison into space.

The Package is, again, so much like an in-game cinematic that you’re hands could start fidgeting for an invisible controller. The equipment is all there: plasma rounds, turrets, bubble shields, energy swords and an assault rifle that quickly counts to 0 as the stock is depleted. The Spartans in their powered suits are done as close as available descriptions allow them: clad in Mark IV armour, watching Kelly sprint down a hall, somersaulting and catching thrown weapons in slow motion could almost look corny: Spaghetti Western meets the Matrix. The balance and feel is so spot on though that it just looks like Halo, pure and simple. We’re even treated to a few quick instances of John’s first person view, complete with a faithful heads-up display showing the action.

Speaking of action, it’s complemented well with the dialogue. The Spartans speak openly with each other, sharing quick wits, tactics and assurances. John himself speaks quite a bit, but his voice is distinctly different from the games: his voice is a rawer, hoarse tone, and doesn’t sound as aged. Again, this is a prequel, so it could very well be made to make him sound a little younger. I’d love to know the cast list for this film but until the commercial release I can’t find it (sadly, after hearing an Elite talk in what I could only describe as an impression of Jack Angel’s G1 Starscream): suffice it to say that Steve Downes doesn’t voice the Master Chief here.

After dogfights in space and an explosive entrance into a Covenant Mothership, John finally finds the so-called package; Dr Catherine E. Halsey, “Mother” of the Spartan program and Cortana. After a few wry lines of dialogue that will sound very familiar to people who have played Halo 3, the pair make their escape… but not before John has to duel a shamed Elite barring their passage.

"Sleep well, Doctor?"
"No thanks to their driving, yes."
Sierra -117 and Dr. Halsey commenting on cryo-sleep. The Package

The Package was split into 2 parts, and the entire episode takes around 15 minutes from start to finish. Whether it’s the crisp detailed CGI, the heavy action or the many references made to past stories (such as The Fall of Reach), it’s so far the top film to come out of this compilation.

Stay tuned for part two of this review of Halo Legends, detailing the other four stories in the compilation, including:

Origins: Cortana, showing signs of rampancy, talks to a sleeping John-117 after the events of Halo 3, musing over the origins of the Halo’s. Anime style by Studio 4˚C.
Homecoming: An unknown female Spartan deals with the memory of the brutal conscription into the Spartan program. Anime style by Production I.G.
Prototype: A Marine sent to retrieve a prototype armoured suit from a struggling colony chooses to stay and help against his orders. Cel-shaded style by Bones.
Odd One Out: A non-canon satirical mock up of the series, focussing on Spartan-1337 (Leet Speak). Anime style by Toei Animation.