Mr Smoozles Goes Nutso is the brainchild of Steve Ince, an award-winning writer and designer with over 17 years experience in the gaming industry, including helping to write and design the much loved Broken Sword series of adventure games during his time at Revolution Software.

Mr Smoozles Goes Nutso is also Mr Ince’s valiant first attempt at branching out and designing a small indie game created largely by himself. Based on his own online comic strip (Mr Smoozles), the game has a charm and identity that feels delightfully retro. It will also feel very familiar to fans of his design work and the previous games he has worked on. I was certainly very interested to see what this world-class designer would be offering players with his indie gaming debut. 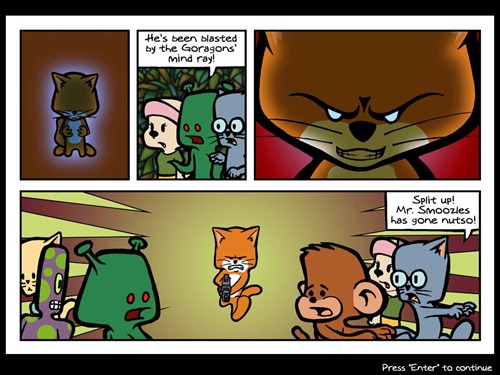 The storyline is fairly simple. Shown in an effective comic strip opening, the Goragons have invaded Earth, zapping Mr Smoozles (an orange cat) with their mind ray and disrupting the whole of reality in the process. Ed (a grey cat) must now stop his friend Mr Smoozles from being nutso (he is running around with a death ray shooting at Ed), free his friends (other cutesy talking animal-type characters) and restore reality back to normal. Even if you are unfamiliar with the comic strip, you will find yourself being quickly drawn in and brought up to speed. 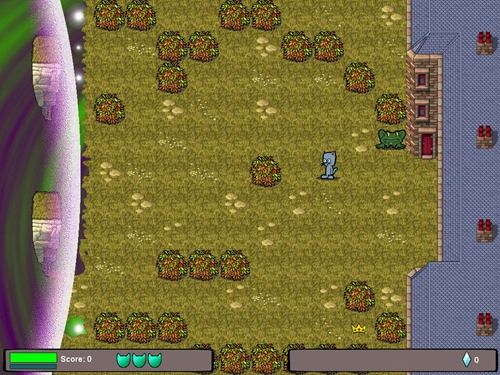 The initial set-up is fast, quick-witted and hilarious. You are immediately shown a top-down view of Ed after the opening cutscene, alone in the gardens outside his hometown. A giant green frog promises to give him a Displacer to beam himself to safety if he can quickly retrieve a nearby crown. The arrow keys control Ed’s movement (he moves on an invisible grid), with Enter performing various actions (such as pick up) and left Ctrl looking at objects. Items in the inventory are used automatically when necessary. Apart from some other one-time-only deals later on, these will be the only controls you need to use!

Once this small opening section is completed, you find yourself in the main section of the house. Of course, with reality being warped some things are going a little bit crazy. The best way I can describe the passageways of the house is like a maze: Mr Smoozles is constantly chasing you and shooting during these sections. The game’s title is certainly apt! There are also pictures hung in the corridors that can be examined: they are strips from the comic which is a great touch. The animations of Mr Smoozles and Ed running around look really funny and stylish, adding plenty to the overall mood.

Luckily, Mr Smoozles does not follow you into other buildings, just the main house and the grounds. Furthermore, the game is very forgiving. You have three lives and an energy bar: if you lose all of your lives and health, you are simply returned to the beginning of the last area entered. Throughout the game you will perform various actions and collect various shards which all add to your total score. I finished on 33,007 which I thought was pretty cool! 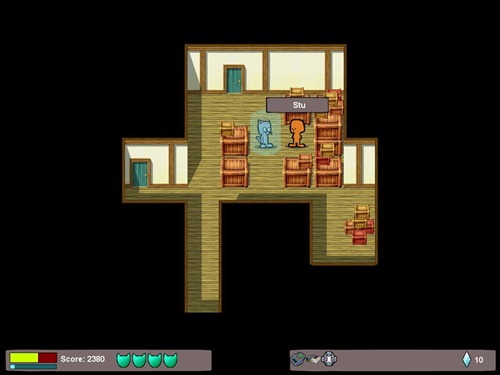 The locations are great, ranging from a slimy sewer to a small village social club. With reality being warped, there are also various strange orange creatures called smoos dotted round. I found these guys hilariously deadpan and their names all being so similar never got old for me either: Stu, Pru, Hugh, Lou… all eighteen of these guys were just priceless, giving me a giggle every time I spoke to them. There are no complex dialogue trees in this game, instead you just keep clicking until no more dialogue is available.

Gameplay therefore shifts between running away from Mr Smoozles, chatting to your friends/the smoos and figuring out puzzles. The puzzles are good fun, although there are certain things you will be doing multiple times. Energy cells power work benches and buttons and your Displacer device is used to interact with terminals. This can get slightly repetitive, but is counteracted well by the clever puzzles: I really enjoyed the the sense of satisfaction I felt when finally gaining access to the alien ship to restore reality near the end. There is also that old-school sense of exploration when you gain access to a new area that a lot of modern games nowadays lack. 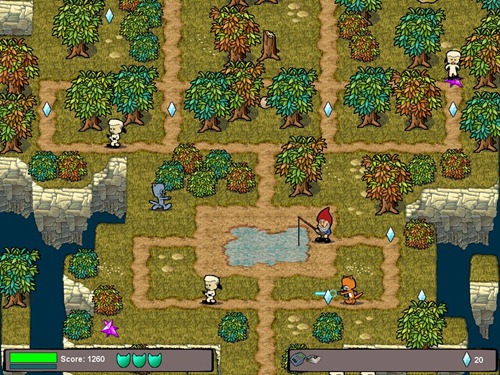 The main hiccups of the game were mostly to do with the difficulty level (which is the same on easy, medium or hard: those settings only determine the amount of damage dealt by Mr Smoozles/enemy robots). Don’t get me wrong, the game is actually very logical in its own way and solutions do make sense overall. Still, I would sometimes try something and it wouldn’t work, leaving me slightly stuck. Other times, a character will have to be spoken to again before something else would work, but you have no indication that this is the case and can be left running around in circles for quite a while!

I didn’t notice initially, but I asked Steve Ince during my playtime and realised that when you start a new game, you can actually choose to have additional hints shown as you play. This apparently adds new dialogue hints seamlessly during conversations, reminding you what you need to do next. I would therefore recommend players switch this on so they avoid getting confused as I sometimes did!

There is also some backtracking as well, which can be slightly frustrating as Ed has a set speed and can only run away from enemies, powerless to destroy them apart from during specific moments. However, this also works in the game’s favour. I had a warm fuzzy feeling in my stomach throughout that wouldn’t subside even when I hit a snag or got annoyed.

This is because Mr Smoozles Goes Nutso reminds me of a classic top down game like Link’s Awakening on Gameboy merged with a classic PC adventure game such as Day Of The Tentacle. It really does make me feel nostalgic for when games used to be in many ways simpler, but deeper at the same time. If this game had been released on a hand-held console back in the day I doubt I would have complained so much during long summer holiday car journeys: it really feels like a little classic that time forgot.

Which is why scoring it feels so hard! Is the gameplay the best in the world, or the premise, or the storyline? Being brutally honest, no. Yet something is always shining brightly throughout: the design. From the beautiful large character portraits shown during conversations, to the delightful dialogue and humour… Mr Smoozles Goes Nutso is a real charmer.

The characters and the world have their limitations, so Mr Ince wisely plays upon their strengths instead. Some small niggles may hold it back from excellence but you will always be having a blast and smiling regardless. As a whole package, the game delivers even if the experience isn’t revolutionary.

It is very Revolution Software though, in spirit at least. I always loved the Broken Sword games because they were made by a British game studio and that unique British humour of ours always prevailed above all else (there are some wonderful nods to Beneath A Steel Sky and Broken Sword). Mr Smoozles Goes Nutso is the same really, which is pretty amazing coming from basically one man (although it doesn’t surprise me at all that Tony Warriner lent a helping hand!)

I must also mention the infectious soundtrack by Josh Winiberg: this guy certainly has a great future ahead of him! The soundtrack reminded me a lot of Final Fantasy 7 funnily enough and had me humming along even when I was away from my computer.

The game was quick to install and download, weighing in at roughly 18mb. One strange thing I noticed was that the game can initially take a while to load up, although once it  has done there are no load times whatsoever. The game can also be played full screen or in a window: it scaled beautifully to my 16:10 monitor. It took around 6 hours to complete and I sometimes used hints from the official site.

Mr Smoozles Goes Nutso is a pleasure to experience even though it is purposely dated in its mechanics and at £2.99, adventure game lovers really shouldn’t pass it up. Recommended to anyone who loves adventure games or retro gaming: it is almost as if somebody has found a classic game from 20 years ago and released it today. A wonderful nostalgia trip provided by yet another delightful indie game, I look forward to seeing what Mr Ince does next. A flawed yet simultaneously priceless gem that I am glad to have experienced.