FEATURE ARTICLE – The Sopranos: A Retrospective 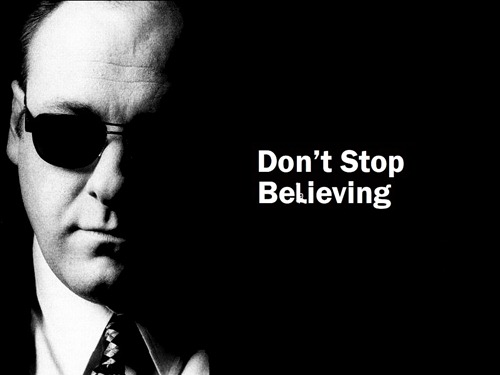 It cut to black. This sprawling, modern day mafia epic was over. But just why was The Sopranos so successful?

On June the 10th 2007 at exactly 10.05pm, 12 million Americans had their televisions cut to black. Rather than stay calm, the majority panicked; the past hour had already been heavy with an almost palpable, unexplainable dread.

Moments later, phone lines were jammed with calls and some cable-television switchboards actually crashed. Internet forums were awash with the ‘trauma’ of the event. Some people were grieving, others were simply angry.

Was it a terrorist attack? Or a simple power-cut? No… it was a long running HBO drama, The Sopranos, airing its final episode. Eight years, six seasons and 86 episodes after it had first started, it was all over.

To many, such chaos at the ending of a mere “television show” seems ludicrous. The shows’ fans would disagree with this statement venomously. Some would further argue that it was not only a “television show”, but also a popular culture phenomenon that deftly commented on American life and society for its run.

Vanity Fair, an American magazine of culture, fashion, and politics even went so far as to call The Sopranos: “perhaps the greatest pop-culture masterpiece of its day” in it’s April 2007 issue. This goes a long way towards explaining the immense success the show has enjoyed.

First of all, HBO in 1999 was only just starting to invest in new original programming again. There was no indication that the pilot show, depicting a Mafioso who was also a family man, would move beyond being just that: a pilot. The fact that this escalated into a series meant little: there was no indication it would go beyond just the one. This then continued into two series, then three. HBO, and the creator of the show David Chase, officially had a hit on their hands.

The protagonist, Tony Soprano, isn’t a typical lead character. He is depressed. He takes Prozac. He feels the good times are over already. He is disenchanted with life, with America, with his work. Of course his work is a world away from anything the average person could comprehend: the flip side is that his personal life and personal problems aren’t that far removed from many viewer’s daily lives.

He confides to his therapist “Everything I touch turns to shit. I’m fuckin’ King Midas in reverse here. I’m not a husband to my wife. I’m not a father to my kids. I’m nothing.” These are insecurities many men can relate to. It’s practically a mid-life crisis.

Elayne Rapping, professor and pop culture expert, who has dealt with the show and its themes in depth whilst teaching courses on Television and Society in New York, explains: “I think the significance of the show was that for the first time, it made a gangster into a hero. I think you need to see it in the context of The Godfather – family and “business” seen for the first time in film as interwoven. But for the small screen, you need a more typical American suburban family so they “reduced” the concept to the TV norms. Its significance – for TV and society – is that it IS the first TV show to make a criminal a hero, and “normal” family man. I think we will see in the future more of this kind of series on regular cable (unless the writer strike kills scripted TV).”

On the face of it, the premise didn’t sound especially original: the gangster/ mafia genre had been done to death (no pun intended), with a wealth of films in the 70’s, 80’s and 90’s. The Soprano’s trick was that it was mafia with a contemporary twist. The wise guys now had families and problems an audience could relate to. These wise guys were also not exactly Henry Hill: they were overweight, self-confessed “fat-fucks” from New Jersey.

New Jersey. Only a stones-throw away from the somewhat stereotypical mafia backdrop of New York, it is a world apart when it comes to atmosphere. The locations ooze a feeling of grit that perfectly marries the stories being told. Creator David Chase chose somewhere he knew, he grew up in New Jersey and this shows on screen. Immediately when the credits fire up, we see the protagonist Tony Soprano driving from New York back into New Jersey. Visuals sear past the windows, in the mirrors: Italian style neighbourhoods, warehouses, marshlands and scrap heaps. The journey ends as Tony pulls up the driveway of his Suburban Mansion.

The backdrop was in place, but would be useless without an effective cast to portray the characters. Relative unknowns were chosen; James Gandolfini as Tony Soprano, Lorraine Braco as Doctor Melfi. The reality of the acting made the material more effective, and believable. Essentially, all of the major characters are murderers. Even Tony’s wife Carmela, played by Edie Falco, is guilty to some extent, taking all of the pros yet shunning the cons. (Again, no pun intended.)

The Mirror television critic Jim Shelley mentioned this in his column ‘tapehead’: “Effortlessly likeable, the key to its success is the way James Gandolfini as mob
boss Tony Soprano (combining all the lumbering charm and brutality of a black bear) makes the anxiety attacks he has started suffering so funny and distressing.”

To ensure the audience wasn’t repulsed by the monsters on screen there needed to be a humanistic element. This is shown in the small details, such as the anxiety attacks. For example, when Tony’s nephew has a drug addiction, the “families”, both gangster and blood relations, stage an intervention. The fact it ends up in fisticuffs is almost irrelevant. It’s the thought that counts.

In a similar manner, an ex-boyfriend of Tony’s daughter Meadow is trying to get into the mafia “business”. Tony discourages this to respect a deceased father’s wishes. However the ex-boyfriend, Jackie Junior, ends up in a shootout where a made-man is killed. Tony allows the punishment of death to be dealt to Jackie, covered up as a drug-related killing.

He has still indirectly committed murder, but to the viewers, this is how his world works. He didn’t resort to the desperate measures until they were necessary. He is a calculating murderer…it isn’t for fun. It’s just business. Sometimes horrible acts need to take place in the show, otherwise it wouldn’t ring true. The mafia element is a waste of time if it isn’t elaborated on to some extent. The show’s success is that it manages a fine balancing act between dark humour, shocking murder, real life situations and quiet moments of reflection.

All of these ingredients that make up the show have integrated into popular culture with ease. T-shirts that loudly proclaim Bada Bing! register with Sopranos viewers instantly as the infamous strip club frequented by Tony’s crew. Shows such as The Simpsons and Saturday Night Live have parodied the show numerous times over the years. The controversial ending brought a fresh number of other shows onto the parody bandwagon. The show is instantly recognisable and familiar to fans.

Even people who don’t watch the show are usually familiar with at least some of its concepts: Tony Soprano in particular has become a screen icon, a character practically everybody knows, even if they can’t name the actor who plays him.

The show itself is self-referential too. The characters constantly base themselves on real-life popular culture such as The Godfather films, aspiring to be like the characters in the movies. They discuss these films, even doing impressions and quoting lines.

The actor who play’s Christopher Moltasanti, Tony’s nephew in the show, was famously shot in the foot when he played a barman in the classic 1990 Mafia film Goodfellas. During one episode of the Sopranos, he is irritated by a pastry chef and shoots him in the foot. These kinds of subtle references are made constantly, adding to the rich tapestry of popular culture present throughout.

No score is used in the show either: the music is strictly popular music, in forms such as classic rock or contemporary electric. These are songs that the audience knows, coming from the radios of the character’s cars and the speakers of cafes and bars. Or perhaps strip clubs and illegal basement card game dens.

A fair point to make would be this: is all of this popular culture ammunition enough to keep the show firing on all cylinders for 8 years? Probably not…which is why the show employs a depth that allows it to be pulled apart like a great novel. The therapy sessions alone could be a show in and of themselves. They allow the viewer to cut through the bullshit and get some insight into a world full of liars and deceivers, straight from the horse’s (or bear’s) mouth.

There is constant symbolism present, especially with the use of animals. The ducks that fly away in the initial episode represent Tony’s fear of losing his family. The cat in the final episode could be interpreted as the reincarnation of a dead character… or it could just be a cat.

David Chase is happy to let the viewers decide. Not everything is explained in real life. The Sopranos reflects this. Even the ending is ambiguous… it says so much without saying anything at all.

All of the televisions went black: it was over at last. The end of an era. Arguably
a golden era providing the best televised drama in recent memory, if not ever (at least, if you are Vanity Fair). Some loved the ending, others hated it. There was only one constant.

When the screen went black, David Chase had the last laugh. He pulled the plug, he called the final shot. He whacked the viewers. It was an ending befitting and perfect. It caused conversation, debate and controversy, just like every other episode had done before it. It said so much, without saying anything really at all. Life goes on, but it will never be quite the same again.

This article first appeared in the physical publication of Alternative Magazine in 2009. Special thanks to Jim Shelley & Elayne Rapping.

One response to “FEATURE ARTICLE – The Sopranos: A Retrospective”