At the end of my review for episode 3 of Tales Of Monkey Island last month, which I awarded a whopping 9.5 OUT OF 10, I noted that my only worry now was whether episode 4 would (could?) be even better, or would falter under the pressure being put upon it by fans old and new alike…

Loading up episode 4 this all played on my mind of course, but something else was eating at me from inside that I couldn’t quite put my finger on. Something I couldn’t shake. It may have been the fact Winslow was tied up back on the Narwhal, not to be joining us on our latest adventure. It may have been the new night-time setting, making the once quite appealing, sunny shores of Flotsam almost remind me of the darkest moments of Monkey Island 2, with splendid lighting effects washing over our bound, silent hero. It may even have been Morgan herself, who we knew all along was an enemy, but didn’t want to quite believe would screw us over so nonchalantly.

As she rows us (Guybrush, myself, and you, yes…you!) back to Flotsam and the evil De Singe, the pure silence and lack of any sort of joke threw me completely off guard. Guybrush and Morgan exchange glances that in the earlier days of the franchise would have just been a pixellated mess. Now, the tension was palpable, and all of a sudden I realised that Monkey Island has not really made me feel like this since the glory days of adventure gaming and the height of LucasArts’ power. Hell, since I was a young boy running away from LeChuck as I sought the treasure of Big Whoop (TM) at the end of Monkey Island 2. This is within the first twenty or so seconds of The Trail And Execution Of Guybrush Threepwood… it is a brilliant, understated opening.

Sure, Guybrush is soon wise-cracking away as he is put on trial for all manner of apparent misdeeds, but those initial moments truly set the precedent of things to come in chapter 4. I couldn’t shake a small feeling of dread as I finally took control of our hero once more… it felt delightful and bizarre to feel that way whilst playing Monkey Island in 2009! This is a darker game than what we have seen so far, a fine balancing act that Telltale have obviously been careful to keep in the spirit of what has happened before, yet at the same time elevate to new levels of drama and player involvement. For the first time this series, I wasn’t sure that everybody I had grown to love would be safe… I liked not knowing, there was excitement in my uncertainty that felt electric. It still does.

The puzzles have finally gotten to a stage now where I don’t feel like things are being dumbed down for the episodic format. At several points I had over half of my inventory full, and I used close to nearly all of the items I collected. Sure, you could argue that some puzzles are more obscure than they should have been. To be honest though, I kind of liked the fact that I had to cheat once or twice by having a peak at Telltale’s online walkthrough. There is challenge here, and by and large it is fair and satisfying to point and click around Flotsam Island once more with the moon shining brightly above.

Rest assured, the re-use of the same location from episode one does not equal a rehash. We get several new interiors, old characters who are now severely pox-infested, and of course the dark of night to contend with. Telltale even reuses the jungle maze in a new way that I completely loved and didn’t feel shortchanged by. It was very clever and made me smile when I eventually figured it out. 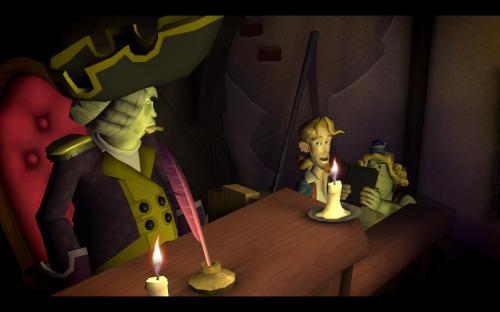 Speaking of smiling, this episode will still have you doing just that, with a healthy portion of laughter on the side to boot. Elaine’s return is so funny I almost couldn’t control myself I was chuckling so much, and the trial itself and the way it is performed is priceless. Guybrush ends up representing himself (due to not having a lawyer) with hilarious consequences. These scenes showcase some of Dom Armato’s best voicework yet. Sometimes he is talking to himself on the witness stand as he also prowls the courtroom as a lawman, arguing with himself… even physically fighting himself! These moments show just how great an asset Dom is to the franchise… he cracks me up with his delivery every time. He simply IS Guybrush Threepwood. The rest of the cast provide the same high level of audio we have come to expect. I can now say with utmost certainty that Tales Of Monkey Island features some of the best audio ever heard in a video game, period.

You will most likely all know by now that Stan returns in this episode. Heck, he is in the icon to install the game! Still, for spoiler-avoidance’s sake I will not go into too much detail about his return. What I WILL say is that the new voice actor is great, Stan’s arms still flail madly all around his body, and finally… if you think his jacket is a bug within the game… go play the earlier installments. 😛 He makes a great return, not as good as Murray’s perhaps, but pretty darn close. Kudos to Telltale for getting so much right with their take on the franchise.

So the audio, graphics and humour rock as always… what of the story? Well, to be honest I find these games such a pleasure to play, and such a pain to review! I have so much I want to say. But, like a broken record, I can’t… and I won’t! I couldn’t live with spoiling this episode for anyone. I can, however, explain how I felt during my playtime. This game blindsided me completely with several emotional scenes that, although not dwelled upon for too long (it is still a humourous game at its core), really affected me. Damn, I am still reeling from some of the stuff that happened even now as I type this review. This is at the same level of quality as some moments from Grim Fandango in my opinion. From moi, with a Manny Calavera tattoo on my right arm, this is high praise indeed, trust me!

Even after that, we have so many other plot strands that are extremely intriguing and entertaining! Is LeChuck really a good guy now? What is going on with Morgan LeFlay? (Her interactions with Guybrush are brilliant, some fantastic acting that really nails the emotions they were going for.) Does Elaine still love Guybrush? Where does the Voodoo Lady fit into all of this? Some questions are answered, whilst others are formed. We also see Guybrush going through emotions we didn’t even know he could possess. It is pretty darn heartbreaking to watch.

Telltale have cleverly spun a story over the past 3 episodes that has ticked all the boxes for the majority of Monkey Island fans. They have now ticked a final hidden box in episode 4, the emotional involvement box, that I didn’t even expect. I am quite frankly blown away. Is the story somewhat cliched? Come on, this is Monkey Island not Shakespeare. And yet there is something sophisticated and adult present that came out of nowhere, and has now left me feeling happy and sad all at once. To feel at the same time totally fulfilled and also crave that one final episode so badly it makes you downright mad… that is what I am talking about! I wanted to hold out on a perfect score until the season final… but what the heck. What do review scores actually mean nowadays anyway?

To some, this episode, or even this series of episodic delights as a whole, may have fallen short. But I can honestly say that, in my eyes, Telltale have not only brought Monkey Island back and made it relevant again. They have made it grow up. For that, I am eternally grateful and so amazed that for less than half of what I would pay for a Playstation 3 or PC game, Telltale have given me 5 months of sheer entertainment that I will never forget. I am not worried about the next episode like I was about this one. I know that it will be a fantastic final.

But in the meantime, as an episodic point-n-click Monkey Island game, The Trial And Execution Of Guybrush Threepwood is as close to perfection as I could have ever hoped for when the series began. The cliffhanger? I don’t even know what to expect anymore… in a good way! Rise Of The Pirate God cannot come out soon enough as far as I am concerned. I just hope there is a new series to follow in the future from Telltale. Adventure gaming is finally back on the map and episodic gaming has totally won my heart. Enjoy.

UPDATE: Be sure to read our interview with Guybrush Threepwood voice actor Dominic Armato, answering questions about this episode, here!

13 responses to “GAME REVIEW – Tales Of Monkey Island: Chapter 4 ‘The Trial And Execution Of Guybrush Threepwood’”