We might not realise it, but we all owe Sam Raimi something. Be it for the superb Spiderman 1&2 (I’ve banished number 3 to the Room 101 of my mind), a newly developed phobia of buttons thanks to the fantastic Drag Me To Hell, or my favourite collection of horror films, The Evil Dead trilogy.

Most importantly, he thrust the man with the most animated chin in the world onto us (no, not Jimmy Hill), the brilliant Bruce Campbell.

For this short piece, I must warn, I’m pretty much going to gush about why Evil Dead II is my favourite horror film of all time.

Evil Dead II can be considered a retelling of the first Evil Dead, and has the indomitable Ash taking his girlfriend to a cabin in the woods. Upon arrival, Ash finds a tape recorder, with incantations from the Book of The Dead – Necronomicon Xmortis- being recited by a professor, and in turn releasing an evil, sinister force from the woods.

The house guests systematically turn into zombies, and it is up to our hero to survive until daybreak. With a fairly hackneyed plot, the film is by no means a masterpiece of cinema, but nor does it pretend to be. It rises and falls on the shoulders/chin of Bruce Campbell, who turns an average film into a pitch perfect blend of horror and comedy, delivering a brilliant experience.

Bruce Campbell’s Ash is tormented by demons, and he portrays his steady decline into insanity with such aplomb, at times I forgot it was even a horror film! Two moments that stick in my mind are Ash cackling manically at himself, along with a stuffed moose head mounted on the wall, and the face-off with his severed hand. It is semiotic of his complete loss of sanity, but totally hilarious of course, and typifies the kind of demented brand of humour that only Sam Raimi seems to be able to conjure.

I’d  love to go into detail about every minute element of the film, and finish every paragraph with a quote, but to do so would be doing it a disservice. It should be viewed by anyone who has become disillusioned with the horror tripe Hollywood has been chucking out recently, if only to see how it should be done. Just be prepared to scour Ebay for Bruce Campbell posters by the time the credits roll.

Like I’ve mentioned before, it’s never going to be regarded as an important moment in cinema, but it is one of the most entertaining, visceral, gory and frankly rollicking horror films I have ever seen, and watching Drag Me To Hell recently on DVD served only to remind me of the pure entertainment that Sam Raimi can deliver.

Now let’s head on down into that cellar, and carve ourselves a witch… 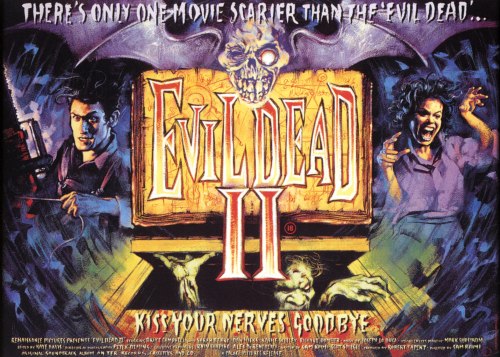 You can also read Alternative Magazine Online’s review of Drag Me To Hell here. Happy Halloween!