FILM REVIEW – Drag Me To Hell

Sam Raimi’s Drag Me To Hell is a roller-coaster ride of a film that has completely surprised me and caught me off guard. I am openly not a particular fan of horror films. I have admittedly enjoyed some, such as the recent Stephen King adaptation The Mist, and older classics such as Don’t Look Now, but the majority of modern mainstream, lets-see-how-vulgar-and-disturbing-we-can-be torture porn-fests do little to entice me.

So it was with some trepidation that I went to see Drag Me To Hell. I was with a good friend and thought it might be fun to see a horror film for once, even though there were alternatives such as the usual safe-bet comedies and throw-away action flicks. It was actually a last minute decision in the queue as it was quite late and all the last showings had started.  Regardless, I am glad I made the decision to see this film.

Before the Spiderman films, director Sam Raimi was better known as the director of the Evil Dead films, low budget horror flicks with an emphasis on clever visual gags and a lethal combo of hard-hitting horror and nervous belly laughs. I had some reservations about whether, after the frankly bloated and average Spiderman 3, Raimi could re-adapt to his old ways and still offer something new and exciting in the process, but the good news here is that he totally delivers.

I am a bit of a wimp when scary events unfold onscreen, even more so in a dark cinema, yet here the way the story is told and the way Raimi directs with a constant blanket of dark humour enveloping the horror, I felt if not at ease, at least always thoroughly entertained and never overly disgusted or disturbed. The story is feather-lite at best, telling the story of loan officer Christine Brown (played with plenty of vulnerability and determination in equal measures by Alison Lohman) and her terrifying ordeal after being cursed by an old lady called Mrs. Ganush whose loan she refuses to extend. Doing this for purely selfish reasons (it ensures a promotion), Christine is non-the-less within her right to deny the loan, making this everyday occurrence all the more horrifying when Mrs. Ganush precedes to attack, rotting nails scratching, gnashing false teeth seeking flesh. She finally settles on a good old fashioned gypsy curse, whereby the victim has to endure 3 days of being plagued by Lamia (a Goat beast, I kid you not) before finally being literally dragged down into the depths of hell to burn for all eternity. Mrs. Ganush is simply a brilliant modern day horror antagonist that definately pushes the envelope on what a 15 rated (or PG-13 in the states) film can get away with.

To reveal any more would ruin what is simply a good old fashioned horror film, and although I have already stated that the story is feather-lite, it matters little here for once. The quality of the acting (even Justin Long as the mild comic relief and struggling to comprehend boyfriend gives a decent performance) is overall very high, the scares are seldom cheap and genuinely work well, and overall there is enough dark humour to make sure that the viewer has a good time and leaves the cinema feeling sufficiently creeped out but smiling too. This film is all about the visual gags, characters fighting with possessed hanker-chiefs and haunted living-spaces. Even the CGI is used sparingly enough to not overwhelm the charmingly small-budget feel the production has, leaving larger-budgeted horror offerings embarrassingly in its dust. 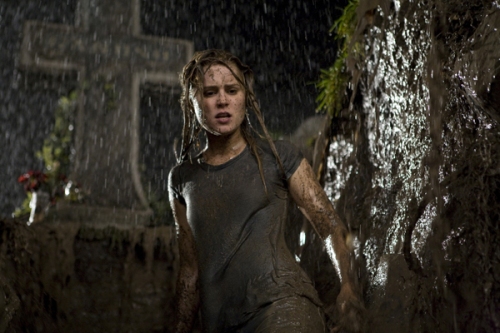 Drag Me To Hell doesn’t reinvent the wheel then, but it does put a fresh spin on a somewhat tired genre. The ride is well worth taking, even for non-horror fans, although the ending does falter somewhat in my opinion. (I guess this will be down to personal preference.)  This still doesn’t stop the overall experience being absolutely thrilling. So in short, if you want meaningless gore, look elsewhere. If you want to jump, laugh and have a great time at the cinema, check this out as soon as possible. Sam Raimi is back doing what he does best. Recommended.

2 responses to “FILM REVIEW – Drag Me To Hell”