Embracelet is an adventure game created by solo developer and composer Mattis Folkestad, whose previous game Milkmaid of the Milky Way AMO described as “a simple, rhythmic affair of pure pointing and clicking.” I concluded my 2017 review of his charming indie debut by stating: “I would certainly love to see Mattis Folkestad tackling a larger adventure game project in the future.” In 2020, during a global pandemic no less, that larger adventure game project has finally arrived… and it’s rather wonderful.

Mattis Folkestad lives in Oslo and just like his previous game, Embraclet has the developer’s roots planted firmly in its DNA. Set in Northern Norway, Embracelet tells the story of Jesper, a 17-year-old boy who is struggling at school and doesn’t seem to have many – if any – friends. It’s easy to sense the restlessness in Jesper, a restlessness shared by many teenagers his age, and the loving exasperation of his mother.

One day while visiting his grandfather in the city, Jesper is entrusted with a magical bracelet that bestows great power upon the wearer, enabling them to manipulate the world around them. Travelling to the remote yet beautiful northern Norwegian island of Slepp where his grandfather grew up, Jesper must unravel the mystery behind the bracelet and somehow return it to its rightful owner. 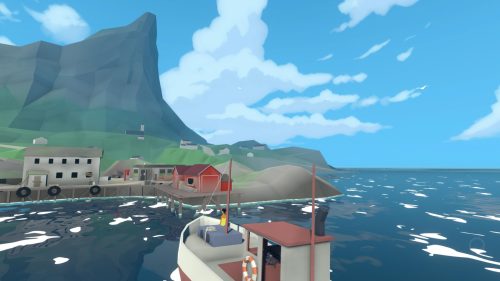 Slepp is home to a sleepy fishing community that has recently fallen on hard times. The fish trade has dried up as a result of competition from the mainland and an oil company is looking to start drilling in the area. The island feels like it’s frozen in time, standing alone against the tide, its days numbered. Exploring every inch of Slepp and revealing its secrets is a tranquil, zen-like affair that never loses its charm.

Compared to the hustle and bustle of city life it’s paradise, but the uncertainty surrounding the island’s future hangs heavy in the air. Soon after arriving Jesper befriends two cousins – Karoline and Hermod – and the trio immediately become fast friends. The game has a romantic subplot that allows the player to grow closer to either of the cousins (if they so desire), but the main focus is on Jesper simply connecting with people his own age.

This sense of player agency runs throughout the entire game. Decision-making never approaches the relative complexity of a Telltale game, but there are enough moments dotted throughout where the player can make a decision – even if it’s just selecting a line of dialogue – to ensure Jesper feels authentically real and reflects how the player feels in the moment.

It certainly helps that the dialogue is so well written; conversations never drag on for too long and despite the lack of voice acting, each character has their own clearly defined personality, their words beautifully etched in floating speech bubbles hovering above their heads.

The game’s stylised 3D graphics convey a lot with a little, with its basic textures (not a criticism) giving Embracelet an almost cel-shaded look. Combined with an exquisite, bittersweet soundtrack centred around a beautiful piano-based main theme, the overall audio-visual presentation evokes the animated films of Hayao Miyazaki and Nintendo’s The Legend of Zelda: The Wind Waker.

Progression for the most part is a breeze – this isn’t an experience reliant on difficulty (again, not a criticism) – with the only bum note occurring during a sequence where Jesper must sneak onto a boat. Failure is built into this scene as part of the narrative, but its somewhat confusing execution might make players feel like they’ve done something wrong (rather than simply being foiled). However, this small blip does little to take the shine off an otherwise sparkling 4-hour adventure. 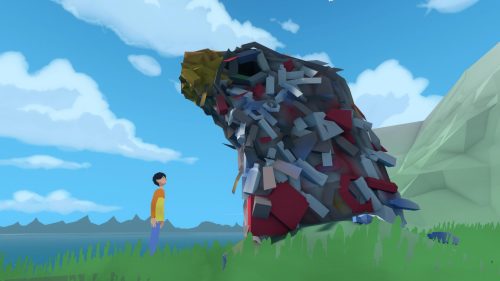 Story-driven games are always difficult to review, because to share what makes them so special is impossible without revealing major spoilers. Suffice to say, Embracelet is a special game. It deals with loss, loneliness, friendship and love without ever skipping a beat. Mattis Folkestad is clearly skilled at crafting narratives that take the relatively mundane and add an otherworldly element. However, his true talent lies in tapping into the humanity at the heart of these fantastical tales.

When Embracelet is completed you’ll miss exploring Slepp as Jesper, you’ll miss his friends, and you’ll likely reflect on your own relationships and hopes for the future. Embracelet may be a small indie game made by a small one-man studio, but it has more heart than a dozen typical AAA releases. The UK is back in national lockdown as I write the final words of this review; if you’re a gamer looking to escape reality for a few hours by taking a meaningful and heartfelt journey, this charming trip to Northern Norway might be just the ticket.