BOOK REVIEW – The Devil’s Only Friend by Dan Wells 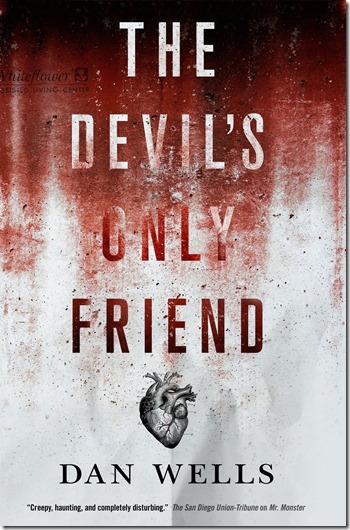 The Devil’s Only Friend by Dan Wells is the latest novel in the John Wayne Cleaver series of books. Although it follows on from the previous critically acclaimed young adult trilogy – I Am Not A Serial Killer, Mr Monster, I Don’t Want To Kill You – which Alternative Magazine Online described as “a scary, darkly humorous and surprisingly heart-wrenching experience”, this latest instalment is a standalone novel (and the start of a brand new trilogy) that follows John as he reluctantly joins up with a secret FBI task force set up by the US government. Their mission? To hunt down and kill demons.

I lived in a small apartment two doors down from a demon named Cody French. Becoming his neighbor had been my idea: we’d come to Fort Bruce to study him, after all, trying to find a way to kill him, and what better way than interacting with him directly? That was what I’d brought to the team, more than anything else: not so much my expertise as my approach.

WARNING: If you haven’t already read the original trilogy – and if you haven’t, you definitely should – AMO would recommend that you stop reading this review now. The Devil’s Only Friend still works as a standalone read, but it contains spoilers for the previous books and as a result, so will this review. Still here? Good!

From the opening line of The Devil’s Only Friend, John promises the reader that “I’m good now. Honest.” It’s only half-true – his girlfriend, his neighbour, his therapist and his mother are all still dead, and he’s still a teenage sociopath who has to constantly recite complex number sequences in his head (and avoid meat, and guns, and animals…) to control his overwhelming murderous desires. He is also the only known person to have ever single-handedly killed a demon.

Which is why now, instead of being locked away in a correctional institution, he’s the youngest member of an FBI task force that tracks down and murders demons. Only he’s not allowed to do the murdering himself and has to regularly see a counsellor. He’s good now. Honest. But he isn’t good, not really. Regular people don’t sometimes go to the butcher shop at night and buy the biggest roast they have and bring it home and cover the room in plastic and hack the meat to pieces with a kitchen knife, slashing and ripping and chopping and grunting until there’s nothing left but scraps…

Then I roll up the plastic, meat and blood and all, and I throw it away and everything is clean and calm again.
Because I’m good now.
I promise.

Brooke Watson, a childhood friend of John’s who was possessed by a demon called Nobody when he killed it, gives the team intel on other demons, or the ‘Withered’ as she calls them. They look just like humans and live what to the casual observer would look like fairly normal lives. Once a demon is tracked down, they do the ‘speed-bump test’, whereby they hit-and-run said demon with a car. If they kill it, job done. If it recovers, they retreat and try to figure out a way to get around its supernatural healing abilities.

The entire novel is told from John’s perspective and he’s even more unhappy with life than usual. His one release from his dark urges was to kill demons rather than people and now he can’t even do that. He’s also a recluse, which makes working with a team – no matter how small – a daily challenge. The other members of the team are all well written, but because John doesn’t want to get to know them the reader never really does either. The one exception is Potash, a government assassin (aka professional murderer) who may be even scarier than John.

You will struggle against me because it is in the nature of prey to do so. The antelope will always run from the lion. I don’t blame you for this or even warn you against it, nor will I waste your time with trite glorification of the thrill of the hunt. You will do your part and I will do mine. All I ask is that you remember this: the only animal safe from a lion is a lion.
Find what the lion fears, and you will have found everything.

Things get even more complicated when a serial killer demon calling himself ‘The Hunter’ starts killing people and cannibalising the bodies, then writing letters to John and the team. There is a sense that the Withered may be mobilising as a united force rather than operating individually, which gives the novel a great sense of urgency. A police raid that takes place towards the end of the book is one of the most chilling chapters to have been featured in a John Wayne Cleaver book to date, which is really saying something.

The only real downside of the book is that John’s reluctance to connect with the people around him can stop the reader doing so too. This makes some situations feel less impactful and also makes John seem less likeable, although he remains a fascinating protagonist nonetheless. Also, the police often behave in a manner which can be a tad unbelievable at times and feels hastily written as a result. However, the scope of the book is much larger than the original trilogy (which juggled demons and murder with high school and the problems of a regular teenager), which may somewhat explain such blips if not outright excuse them.

There was a body in the bed, lying on top of the covers: light hair and fair skin and most of the flesh on his torso missing, chewed to bits by human teeth. The head, as before, was untouched.
The lips were moving.
“Put my hands on my head,” said the voice. The corpse’s eyes were unfocused and glassy. “Of course you would say that. But which hands, and which head?”

Overall, The Devil’s Only Friend is a thrilling page-turner of a book that proves there’s still plenty of life – and plenty of worthwhile stories to tell – in the death-saturated world of John Cleaver. With a forthcoming film adaptation of I Am Not A Serial Killer starring Christopher Lloyd set for release in 2016, there’s never been a better time to become acquainted with Dan Wells’ supremely well-written and strangely endearing teenage sociopath.

Tagged as Book, Book Review, Dan Wells, Fiction, I Am Not A Serial Killer, I Don't Want To Kill You, John Cleaver, John Wayne Cleaver, Mr Monster, The Devil's Only Friend