BOOK REVIEW – Man of Steel: Inside the Legendary World of Superman by Daniel Wallace 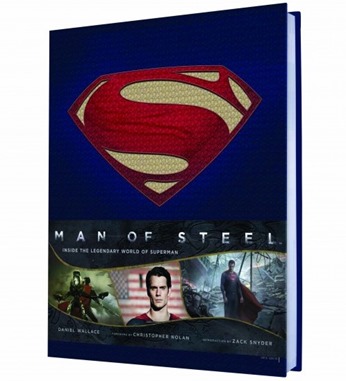 I believe what Zack has done in Man of Steel will define Superman for our time, but there is little point describing Zack’s infectious enthusiasm in words when the incredible images in these pages get it across so magnificently. I’ve seen a lot of concept art in my time, but I’ve rarely seen such focused visual power. And I’ve rarely seen the promise of such imagery actually delivered onto the screen. But that’s what Zach does.

Unlike Christopher Nolan (who was the film’s producer and writes the foreword for Man of Steel: Inside the Legendary World of Superman), I wouldn’t go so far as to say that Man of Steel defines Superman for our time – I have a feeling that the planned sequel is far more likely to have a chance of doing that. However, it’s hard to argue with the fact that Zack Snyder is an extremely enthusiastic and talented director. From his best films (Watchmen) to his worst (Sucker Punch) the imagery shown on-screen is always spectacular, even when his storytelling skills prove lacking. Man of Steel is no exception.

After the foreword by Nolan and an introduction by Zack Snyder himself, the book is split into 5 sections: MODERN-DAY MYTHMAKING, CASTING MAN OF STEEL, WELCOME TO KRYPTON, WELCOME TO EARTH and THE HEART OF THE LEGEND. The casting section covers all of the main characters, but is perhaps the least substantial section of the book – as is perhaps to be expected, all of the actors wax lyrical about their respective roles… but there is a disappointing lack of on-set stories and actual substance to what is being said.

The later sections of the book mostly make up for this – the attention to detail is staggeringly impressive, whatever your thoughts on the actual film. The dominating section concerning the planet of Krypton (the setting for the film’s spectacular opening) in particular is packed with numerous intricate details that mostly flew under the radar on-screen, but no doubt added an immense sense of history and authenticity that would have otherwise been lost. Costumes, environments and technologies were all approached and designed on a practical as well as visual level. The Kryptonian language was even created from scratch by Christine Schreyer, a linguistic anthropologist and assistant professor of anthropology at the University of British Columbia!

The main reason to delve into Man of Steel: Inside the Legendary World of Superman is for the stunning concept art featured throughout – some of the double page spreads are absolutely gorgeous and the overall design of the book (despite the lack of a proper dust jacket) is of an extremely high quality. The silver lettering adds a touch of class to the text and the pages themselves are printed on extremely high quality paper that befits the beautiful images being shared. In fact, many of the film stills (featuring elements of CGI) look decidedly blurry compared to the crispness of the concept art.

Much like the film that it explores, Man of Steel: Inside the Legendary World of Superman often seems to be having an identity crisis. Is it a behind-the-scenes book? Is it an art book? Ultimately it’s neither, but the end result is definitely worth a look for fans of the film – there’s certainly plenty to look at and enjoy, just don’t expect the text – which is well-written, yet lacking any true revelations – to live up to the pictures.