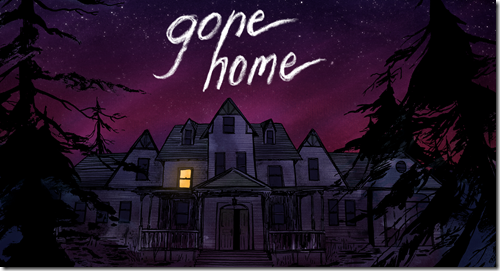 Gone Home is a story exploration video game created by independent studio The Fullbright Company, which was founded in Portland, Oregon in March 2012. Its co-founders are Steve Gaynor, Johnnemann Nordhagen and Karla Zimonja – previously, members of the studio have worked in various capacities on games such as BioShock 2, XCOM and BioShock Infinite. As Kaitlin Greenbriar, players will travel back in time to 1995 to explore their family home in an indie adventure game that is nostalgic, bittersweet and heartfelt.

The year is 1995 – June 1995, to be precise. A young woman returns to her new home after a year traveling abroad only to be greeted by a series of dark empty rooms, her family nowhere to be found. It’s not long after midnight and a storm is raging outside, rain cascading down each and every windowpane. Kaitlin Greenbriar is back – but where is everyone else?

As Kaitlin, players must venture into a large, painstakingly detailed 3D house – turning on as many lights as humanly possible along the way – and investigate where her family has gone. In particular, Kaitlin’s sister Sam needs to be found. Throughout the game, her private thoughts are spoken out loud and it quickly becomes apparent that she has gone missing. A note taped to the front door asks ‘Please, please don’t go digging around trying to find me.’ The attic is locked. Kaitlin is mostly an avatar for the player – it’s Sam’s story that drives the narrative.

Gone Home isn’t an adventure game in the traditional sense. The amount of true ‘puzzles’ can easily be counted on one hand with fingers to spare. Instead, the gameplay consists mostly of exploration and investigation. The Greenbriar residence feels like a real home – a sprawling mansion with few locked doors, there is evidence of life around every corner. Sofa cushions are positioned oddly in the lounge, complete with soda cans, pizza boxes and magazines. Later, a written note makes reference to this makeshift den and it clicks into place. Gone Home is full of such light bulb moments (pun intended).

Letters, diary entries and photographs – just some of the hopes, dreams and desires waiting to be found and pieced together. It never feels like The Fullbright Company has simply thrown exposition onto a scrap of paper. Instead, every item feels like a genuine part of the tapestry of the Greenbriar family. The detail is staggering (food, toiletries, books – everything is designed to hold up to close scrutiny) and you’ll often find yourself pouring over something as inconsequential as a shopping list. Nearly everything can be picked up, zoomed in on and poured over. Never boring, always worthwhile.

Kaitlin and Sam’s father is a moderately successful science fiction author and extracts from his books (along with letters sent to and from his publishers over the years) are waiting to be found – although nowadays he mostly writes hi-fi reviews. His chosen professional has obviously rubbed off on his daughters: they too have dabbled in writing fiction and short stories over the years with varying degrees of success. Each minor masterpiece discovered has its own unique voice and these side stories all tie into the main narrative. It’s subtle storytelling and it’s brilliant.

It’s hard to explain what Gone Home is about without robbing some of the experience from a first time player. Therefore, please forgive this reviewer for talking in riddles – Gone Home is about love, family… and buried secrets. It’s an emotional rollercoaster that deals with sexuality, loneliness, ghosts, dreams, hopes and buried desires – mostly communicated via the game world itself. The voice acting is shot through with authenticity and emotion, and the soundtrack – featuring indie bands such as Bratmobile, Heavens to Betsy and The Youngins – is a nostalgic delight, waiting to be discovered on good old-fashioned cassette tapes (remember those?) that can be inserted into the nearest tape deck.

Gone Home is an interactive storytelling triumph that gives players back whatever they decide to invest into it. Rush through the game and you’ll catch the main beats of the narrative, but risk missing out on all of the rich context and delicious undertones that make it a truly special experience. It’s slightly too short, would have benefited from a few more puzzles to justify its label as a video game and doesn’t tell us nearly enough about Kaitlin Greenbriar – but as an experience, it’s right up there with the very best games of 2013. Melancholic yet uplifting, scary yet comforting… Gone Home is unforgettable.