The World’s End is a British science fiction comedy film directed by Edgar Wright. The final film of the ‘Three Flavours Cornetto’ trilogy (following on from 2004’s Shaun of the Dead and 2007’s Hot Fuzz), the film stars Simon Pegg as Gary King, an alcoholic ‘free spirit’ who never grew up. When Gary decides he wants to complete the Golden Mile (a 12 pint pub crawl that he didn’t get to finish as a teenager), he tracks down his old school friends Peter (Eddie Marsan), Oliver ‘O-Man’ (Martin Freeman), Steven (Paddy Considine) and Andrew (Nick Frost) and convinces them to return to their sleepy hometown of Newton Haven. Upon arrival they discover that not much has changed… apart from the fact that most of the population has been replaced by alien robots!

The World’s End starts out with a wonderfully nostalgic monologue from Simon Pegg as Gary King, spoken over a flashback of his final school days with his best friends. The unlikely group of lads attempted the Golden Mile back in 1990, but for a variety of reasons never made it to the final pub: The World’s End. On that fateful night, the best night of Gary King’s life, as he sat on a grassy hill and watched the sun rise over Newton Haven, he thought to himself that life could never get any better than this. He speaks with such reverence and enthusiasm that it’s easy to buy into the importance of this long ago, never to be forgotten night. Gary’s support group, sat with him in a lifeless circle, don’t seem so convinced.

When asked if he regrets not reaching the final pub, Gary simply replies “nah”… but before long he has thrown on his old leather jacket, and sets out to track down his ‘friends’ one by one. Each of them greets him with a varying degree of warmth – they’ve all grown up and moved on since their school days, whereas Gary has in many ways remained frozen in time. Through quick talking, lying and emotional manipulation, Gary eventually manages to get everyone on board for a boozy trip down memory lane – even Andrew (Nick Frost), who has many reasons to hate Gary and tellingly drinks tap water instead of lager nowadays. Piling into “The Beast” (Gary’s old car – he really is frozen in time) the motley crew head for Newton Haven to the sound of ‘I’m Free’ by the Soup Dragons. That’s right – even Gary’s old mix-tape is still in the tape deck. 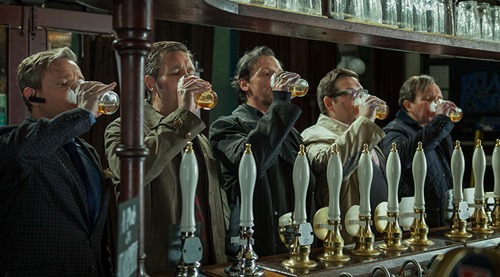 It’s a purposely slow start that is heavy on characterisation but nonetheless remains extremely enjoyable to watch, despite the initial lack of action. That comes later. Newton Haven feels like a genuine little sleepy British town and it’s hard not to get swept up in Gary’s grand plan, even if many of the pubs now look identical inside due to franchising (an effective visual gag). Each member of the group shines. A particularly surprising moment occurs when Peter (Eddie Marsan) briefly talks about the relentless bullying he received as a child, completely dragging the audience out of the comedy and making heartstrings pull before Gary swiftly ruins the moment by slamming a round of shots onto the table.

This borderline poignant instance sums up the entire film – the dialogue is sharp, the banter never misses, the plot is enjoyably ridiculous and ridiculously enjoyable (in that totally awesome way that only the science fiction genre can truly pull off) and you’ll actually care about what happens to the ‘five musketeers’, plus O-Man’s sister Sam (the charming Rosamund Pike), who makes for a brilliant love interest whilst managing to avoid becoming a mere damsel in distress. The film’s extended set-up is important – it ensures that once Simon Pegg steps into the men’s loo and ends up fighting a robot teenage boy with blue ink blood, knocking his entire head off… you’ll be willing to go along for the ride.

What follows is a tonal shift that manages to retain genuine emotion while treating cinemagoers to some of the most inventively choreographed fight sequences committed to film in quite some time. Pierce Bronson has a delightful cameo as the heroes’ suave and sophisticated old teacher, trying to convince them not to resist the invasion. The robots are wonderfully designed, human upon first glance but put together like cheap plastic dolls, blinding blue neon light emanating from their eyes and mouths as they advance. One of the best bar brawls sees Andrew (Nick Frost) wearing bar stools like boxing gloves and dealing out punishment like a pro against overwhelming odds (by this point he’s pretty tanked up) while Gary tries to drink his pint and fight at the same time with limited success.

It’s an interesting role reversal for Pegg and Frost, who both play against type. Simon Pegg usually plays the straight man, so it’s not only refreshing to see him cutting loose as troublemaker Gary King, but a relief that he inhabits the role with such believability. Nick Frost takes things one step further. He plays a successful businessman who is secretly unhappy but always holds his head up high, even as he drinks a pint of water in a crowded pub. For a larger gentleman, he moves with surprising dexterity and grace – it’s a continual joy to see him dispatching countless robots and running through the streets in search of Gary (who is always on his way to the next pub).

The World’s End is a surprisingly deep and emotional slice of sci-fi daftness. The return of recognisable British actors from Shaun of the Dead, Hot Fuzz and Spaced ensures that the supporting cast match the front-and-centre talent every drunken step of the way. The main (almost) disappointment is the ending, which makes the mistake of thinking that audience members need a clear explanation for all the alien robots. It borders dangerously close to ruining everything that has gone before, but thankfully takes a U-turn at the last minute to arrive at an ending that’s pretty much perfect in terms of Gary’s literal and emotional journey to The World’s End. Extremely British, very funny and ultimately rather touching. Bottoms up. Cheers!