Gemini Rue is an award-winning science fiction adventure game created by independent developer Joshua Nuernberger. Originally released for PC in 2011, the game has now been ported by Wadjet Eye Games to iOS devices. Players take control of Azriel Odin, an ex-assassin with a dark past, and Delta-Six aka Charlie, a memory-wiped prisoner trapped within a secret facility deep in space.

Gemini Rue on iOS (Alternative Magazine Online’s review copy was played on an iPhone 4S) is the exact same critically acclaimed adventure game that was released on PC in 2011. The game begins on the perpetually rainy planet of Barracus, with ex-assassin Azriel Odin determined to find his missing brother. To do so, he must deal with a deadly crime syndicate known as the Boryokudan, searching the desolate city armed with only a communications device, lock pick and gun.

Running parallel to Azriel’s search is the struggle of Delta Six, a man who wakes up in a maximum security prison with no memory of who he is or how he got there. Forced to undergo tests that train him in gun battle by an unseen ‘Director’, Delta Six (who is told his name is Charlie by his fellow prisoners) must organise a breakout whilst surrounded by people who he can’t remember and doesn’t know whether to trust.

The graphics are evocative of the popular big-budget adventure games of the mid-90s from Sierra, with a spectacular Vangelis-esque soundtrack composed by Nathan Allen Pinard. The voice acting is also extremely impressive, continuing the high standard set by Wadjet Eye Games. Although the moody art direction and sound design is obviously influenced by Blade Runner, creator Joshua Nuernberger (interviewed here) carves out his own unique vision and the storyline is fantastic. In 2011, I emphasised how “The storyline of Gemini Rue is nigh on perfect, a dark slice of sci-fi heaven that touches upon themes of identity, friendship and redemption. I can’t claim that it is the most emotionally involving game I have ever played – it could have used some levity at times – but overall, this is one of the best narratives I have witnessed within any genre, within any medium, for a number of years.” These words still hold true in 2013.

Adventure fans who have yet to experience Gemini Rue can read AMO’s original review here – nothing has changed. It’s a fantastic adventure game that has been faithfully ported by Janet Gilbert. I beta-tested the original release and I was lucky enough to do so again for this iOS port. I can confirm that the game’s press release rings true: The iOS version has been extensively optimised and overhauled for touch screen play with larger in-game icons and text, comfortable “point and tap” controls, a hotspot finder to minimize pixel hunting, and a redesigned combat system. The controls have been slightly altered so that everything can be done with one tap, but it doesn’t take anything away from the experience. If anything, the graphics look better on the iPhone’s smaller screen, almost akin to a HD upgrade. The shooting controls have also been adapted well, even if they did sometimes feel a bit fiddlier than I remembered them being on PC. 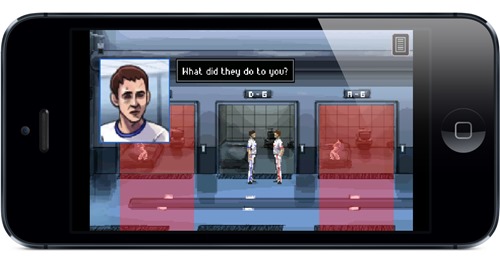