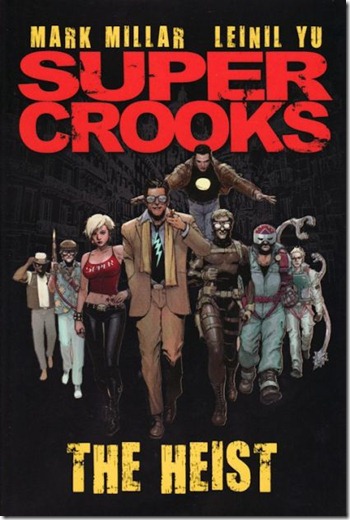 Supercrooks: The Heist is a graphic novel written by Mark Millar (Kick-Ass, Wanted) and illustrated Leinil Yu (Superman: Birthright, Secret Invasion). Alternative Magazine Online described their first collaboration, Superior, as “one of 2012′s most enjoyable graphic novels”. Their latest offering, Supercrooks, tells the story of Johnny Bolt, a super-villain who puts together a heist in Spain with his villainous friends. Their target? The Bastard – the world’s most notorious super-villain. This hardback edition from Titan Books collects Supercrooks #1-4.

This is a really well written and really well drawn book. Trust me, you’ll bloody love it. If any of you buying this book are dumb enough to read this before you actually read the story that follows it then, apart from needing therapy with your OCD, just trust me. It’s great.
Introduction by Brian Hitch

After a gushing and humorous introduction by Brian Hitch (who is apparently co-creator of two of the most influential comics ever, The Authority and The Ultimates), Superior immediately sets the scene. We’re in modern-day America and crime no longer pays – our protagonist Johnny is shown getting his ass kicked on a train (despite his ‘electric powers’) after stealing some diamonds and being chased down by a superhero known as the ‘Gladiator’.

Being led through ‘Supermax Prison’ some time later, one of the guards (who seems to known Johnny well) asks him why he even tries anymore. It’s not just the Gladiator out there – it’s the hundred and ninety-nine other superheroes in the Tri-State area. Johnny’s reply? He has a wedding to pay for – those cakes and dresses don’t buy themselves.

Five years later, Johnny’s friend and mentor ‘The Heat’ runs up a $100 million bill in gambling debts after being caught cheating with the help of a ‘level four psychic’. The psychic is killed by having a cigar-case teleported into his skull – and the vengeful ‘Salamander’ gives The Heat exactly one month to come up with the money, or he’s dead too.

With Johnny fresh out of prison (and reunited with his beautiful ex, Kasey, ‘the best psychic in the goddamn business’), The Heat begs them both for their help. Johnny can’t turn his back on the old man, and neither can Kasey, despite her reservations. They decide it’s time to get the old gang back together for one last heist – The Ghost (The World’s Greatest Cat-Burglar), TK McCabe (The Telekenetic), Forecast (New York City’s Weather-Maker), and Roddy and Sammy Diesel (The Indestructible Men). Johnny also blackmails the ‘Bad-Ass’ into joining their team… aka Gladiator!

Even more so than Millar/Yu’s previous collaboration on Superior, the pace is fast and furious and the content is bloody and violent. The artwork is vivid and gorgeously coloured throughout, with the style often veering uncomfortably close to reality. Crimson red splashes each panel as the Bastard causes heads to explode and The Indestructible Men spend thirteen long minutes being sliced up by lasers.

Supercrooks is X-men meets Kick-Ass meets Ocean’s 11. The storyline and character development is always secondary to the lightning bolt pace. It doesn’t tell the best story or even feature the most memorable characters, but everything is presented with cinematic flair and the heist itself has some extremely neat twists and turns. It comes as no surprise that a movie adaptation, directed by Nacho Vigalondo, has already been scheduled for release in 2014. Supercrooks: The Heist is a great graphic novel – but this reviewer has a feeling that, with some further story and character development, it will be an even better film.