INTERVIEW – In Conversation With Nicki Rapp (Lilly Caul, The Walking Dead: The Game)

Following on from our recent interviews with The Walking Dead voice actors Dave Fennoy (Lee Everett) and Adam Harrington (Andrew St. John), Alternative Magazine Online is proud to present yet another exclusive online interview – this time with the wonderful Nicki Rapp, the voice of Lilly Caul!

Hi Nicki, thank you for your time and welcome to AMO!

Thank you Martin, and thanks for the invitation!

I live in Oakland, California on a sunny avenue with adorable dogs everywhere. I can’t have a dog in my building so I am thankful for the daily moments of cuteness. Traveling is one of my favourite pleasures in life – and I love to seek out really special places; the kind of places that when you think back to them it can cure the blues out of any day.

How did you first get into voice acting?

I went to Drama School at The American Academy of Dramatics Arts and was really concentrating on theatre – I never thought of voice acting really – even had a few teachers tell me that my voice would limit my acting… but my Voice and Speech teacher suggested I look into it. After graduation, I started classes at Voicetrax, San Francisco in Sausalito, California and instantly fell in love with the craft. There’s really nothing like the buzz of being so connected to your character – and the gift of really letting your imagination run free absolutely can’t be beat.

What did you do before you became a voice actor?

Ohhh boy, I have made a lot of lattes, waited a lot of tables. Lots of pet sitting. My favourite job was working for Hostelling International in San Francisco. I worked in the cafe and served breakfast to a lot of amazing people from all over the world… met people who have totally changed my life. 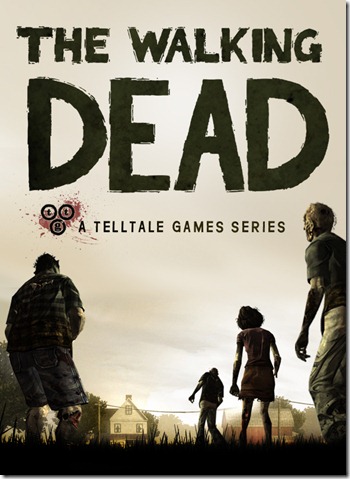 You voice Lilly in the new The Walking Dead episodic video game created by Telltale Games. How would you describe Lilly as a character?

Lilly is a badass. She has a lot of emotion trapped inside but was never allowed to show her vulnerability because of the way she was raised. It’s all brewing in there and she has to keep pushing it down to survive her circumstances – and the insane environment she is now trapped in. I’ve never played a character like this before – I am a very emotional, my heart on my sleeve kinda gal. Lilly can’t go there… her strength is intense!

How would you describe her relationship with her father, Larry?

A very complicated relationship indeed. To outsiders, no one can understand how she can care for him – even though he is her father. I get it.. it’s hard when he is such an ass! He was really all she had in the world… and she loves him despite his behaviour – that’s real.

When Larry died in the recently released Episode 2, Lilly seemed emotionally devastated – how do you think this event will shape her character in future episodes?

That was intense, right? Recording that scene wrecked me! I do believe the boiling point is near… even Lilly can only take so much. When you hold so much anger in for so long and in such an unbelievable scenario, it’s inevitable that something is really gonna take you over the edge.

If you were Lee in the same situation, what would you have done – tried to revive Larry or smashed his head in?

The choices in this game are insane! I know the guy is gonna turn; and he hasn’t exactly treated me well since the second we met. He represents a lot of ugly old school attitudes that are hard, if not impossible to ignore. I care for Lilly despite her bitchiness… but let’s be real. The head has got to go… sorry Larry.

Lilly and Kenny don’t seem to get on at all – what do you think are the reasons behind this?

Serious power struggle! Also, I have to add, Kenny is an idiot. He thinks he knows everything that everyone needs – Lilly has skills to back it up.  Just because he’s a man I think he feels he is better for the job. Truth is, Kenny’s got a moustache to match his big attitude.

Do you think Lilly has what it takes to survive in a world overrun with zombies?

Those zombies can be pretty persistent… but I believe that Lilly’s tenacity and general ‘over it’ attitude will take her far. I think she’s about as tough as you can get – as long as she can keep her head straight.

Where do you record your lines and have you ever met any of the other voice actors?

I record my lines in the beautiful town of Fairfax, California at Studio Jory.  Jory’s studio is rad, and I love working with Julian and Jared from Bay Area Sound too. We always have fun, and I feel lucky to have worked with them on some really cool stuff throughout the years.  Last week we had a playthrough of Episode 2 at our director, Dennis Lenart’s place. It was so rare to have so many of the voice actors together and to meet so many people from Telltale as well. It was epic! We had to play through some of our character’s roughest moments – the energy in the room was crazy. What a fun night… I hope we do it again!

You’ve also worked with Telltale Games on previous projects – how did you first become involved with the studio?

The lovely and kickass Morgan LeFlay was my first wonderful adventure with Telltale Games. Brilliant! When I found out I got that part I was completely over the moon. Telltale has helped me grow up a bit… I was mostly playing kids and furry cute animals – but becoming a Ghost Pirate Hunter is something else!

I thought you were brilliant as Morgan LeFlay in Tales of Monkey Island – Guybrush Threepwood voice actor Dominic Armato seemed to agree with me when I interviewed him too! Was that a fun character to play?

Aw thank you Marty! I enjoyed playing Morgan so much… I loved that she was so tough and physical but she couldn’t ultimately hide her vulnerability – her true feelings for Guybrush will always win. I love the humour in the story and how easy it is to become involved with the characters. I hope we get to do more. I’ve never met Dominic but I hope someday we will… what a compliment, thank you for sharing with me!

Morgan was a great sword fighter – were you ever tempted to mime her actions whilst performing your lines?

I can’t help but get physical when I record that stuff! Voice acting sessions can really be a great workout!

Tales of Monkey Island was left on a bit of a cliffhanger – do you think there will be a sequel?

Would you like Morgan to return if there ever was a sequel?

If a sequel happens, she’s gotta be there, right? Too much was left unsaid, too many swordfights and sarcastic retorts are lingering in the air…

What other video games have you voice acted in?

I’ve been a Sim since 2003, and love the craziness and the super intense brain power of that job. So much fun! Psychonauts is one of my favourites EVER… I really hope a sequel happens for that one as well! Loved working with Telltale on Sam and Max too.  I was in a quirky web cartoon with Mondo Mini Shows called Piki and Poko: Adventures in Starland; I always think of that series as my first big break.

What’s next for you Nicki?

I just recorded more Sims and I am working on some stuff with LeapFrog as well. I never really know what is next… I just hope there will be more! I love my job so much, I am always so grateful for the next opportunity.

Thank you for your time! You did a superb job as Morgan LeFlay and I shall look forward to hearing you again as Lilly in future episodes of The Walking Dead!

Thank you again for this opportunity. Enjoy the game!

6 responses to “INTERVIEW – In Conversation With Nicki Rapp (Lilly Caul, The Walking Dead: The Game)”