The indie gaming scene has seen a huge boom over the past few years, especially within the adventure genre. Size Five Games (formerly Zombie Cow Studios), a British independent video game developer founded by Dan Marshall in 2008, is a prime example. The studio’s critically acclaimed games ‘Ben There, Dan That!’ and ‘Time Gentlemen, Please!’ are in many ways leading the charge. It is therefore with great pleasure that I present an exclusive interview with Dan Marshall!

Hi Dan, thank you for your time and welcome to AMO!

Can you tell us a little bit about yourself please?

I eat too much cheese. I have very large feet. I own a leather jacket that’s exactly the same as Indiana Jones’. I’ve never managed to watch The Godfather all the way through. I also run a small indie games company called Size Five. We’ve made some pretty neato stuff.

Can you tell us some more about your adventure games ‘Time Gentleman Please!’ and ‘Ben There, Dan That’?

They’re love letters to the sort of games I grew up playing – cool, madcap little point-and-click adventure games that you’d spend weeks on trying to solve a single puzzle. They’re pretty funny, a bit rude, and well worth the more-than-reasonable asking price!

What made you decide to charge money for ‘Time Gentleman Please!’ as opposed to the freeware model of ‘Ben There, Dan That’?

Well, BTDT was free largely because at the time I didn’t think people would really pay money for it, in a market that was saturated with high quality freeware games. I think that was a bit naive, in retrospect. It’s well worth a couple of quid, and I do regret not charging for it initially. You can always move the price down, you can’t really move it up. Lesson learnt.

When I was making TGP, it was clear it was a much bigger, better game with a higher level of polish and well worth asking money for. It’s a great game but has no voice acting, so I figured $5 was more than fair. When it came out, everyone basically agreed it was a complete bargain, which I suppose is better than everyone agreeing it was colossally overpriced.

Yes, I think so. It’s certainly made enough money to help launch me from ‘part time indie developer’ to one of those guys who actually does this for a living.

Both games feature yourself and Ben Ward (co-designer) as protagonists. What prompted this decision and how accurately do these characters convey your real life personalities?

You know how people pass notes to each other at school? Ben and I used to pass comics – I’d draw a panel and pass it over. He’d continue the story and pass it back. They were these horribly juvenile stories written by two 15 year olds. As we grew older, the comic book Dan and Ben evolved, and eventually we put them in a game.

They’re not massively like us, really. Ben’s certainly marginally-less murderous.

Is Ben Ward still working with you?

Ben helps out where he can, yes. People always assumed that the company was the two of us, because we’re both in the game together. Actually, I do all the code and art and the lion’s share of the design and writing – Ben’s very tolerant at putting up with my emails and talking through things in the pub with me.

He’s not technically working on the next game, but he’s involved insofar as I know I can rope him into talking through ideas with me.

We’re best friends. He’s going to be the best man at my wedding.

I always hated the name Zombie Cow, it was picked in a rush and I was hoping it’d grow on me. As it happened, it grated more and more as the years went by. After we finished Privates and I started work afresh on a new project, it felt like time to shake all that off and make sure I was on the track I wanted to be on. As I said at the time, there’s no reason going through life with something making you miserable if there’s something you can do about it – the name Zombie Cow was making me unhappy, so I changed it. Bit reckless, but I’m confident it’ll work out in the long run.

So this something you do full time?! What else do you do?

No no no, this is genuinely my whole entire job. Unbelievable, isn’t it?

What is it like to create games with Adventure Game Studio? Are there any specific limitations that you came across when creating the Ben and Dan games with this engine?

AGS is great, a really nice useful little tool for making point and click adventure games. There are a few quirks that require some lateral thinking – when you want to do a specific thing, but AGS is hard-wired to do it a different way. So you wind up having to code around it to circumnavigate the core of the engine. But by-and-large it’s an amazing tool for taking care of the vast majority of what’s needed to make an old-school adventure game.

Are the graphics in the Ben & Dan games hand drawn?

Yes, I do all the graphics by hand. I deliberately didn’t spend a massive amount of time on them, because we wanted it to be about the script and the entertainment – give it that South Park feel.

Who does the music?

The BTDT theme was done by Mike Watts, but he was unavailable for TGP so I roped a couple of guys by the name of Nahkman and Swith to do it all for me. They did an excellent job. 🙂

What can you tell us about ‘Revenge of the Balloon-Headed Mexican?’ Why was the game cancelled?

Revenge of the Balloon-Headed Mexican was supposed to be a small follow-up to TGP, the first in a series of mini episodes featuring Dan and Ben.

It was cancelled simply because it didn’t work. It went through several revisions, and work was well underway on it. But it just didn’t have the same sort of zing and appeal as TGP – despite the situations and the setting it felt derivative. If I wanted to churn out soulless sequels I wouldn’t wear my Indie Developer badge so proudly.

RotBHM was shaping up to be a nice little game, but it was making me unhappy. So I took the difficult decision to can it.

Will there be another Ben and Dan game taking the cancelled game’s place? Or are there no current plans for their return?

There are no current plans for a new Dan and Ben game. I’ve been toying with various ideas – everything from a 5 minute single room mini-episode puzzle to full-on new games. For now, they’re just swirling around in my brain waiting for the right time.

How difficult is it to stay afloat as an indie game developer in the current economic climate?

It’s as easy or difficult as anything else, I suppose. I can’t say sales have seen much of a tail off due to the recession, but then my last paid-for game is a couple of years old now so you’d expect a decline.

It’s a worry, but nothing more. I’m aware that I’ve got to make a game and sell it asap or I’m going to have to get a proper job. But I’m determined to make something amazing, and I’m not prepared to cut corners or compromise. I’ll do what it takes to release a bone-fide indie masterpiece.

What are your views on digital distribution and digital game download clients such as Steam?

Steam is amazing. They’ve become the life-blood of the indie scene as far as I’m concerned. They do an amazing job and get various little games to an audience of millions.

I buy whatever games I can as digital downloads these days – it’s where we’re going, and I need less boxes cluttering up my flat. I can’t imagine I’ll ever release a game in a box, unless its as a Special Edition. 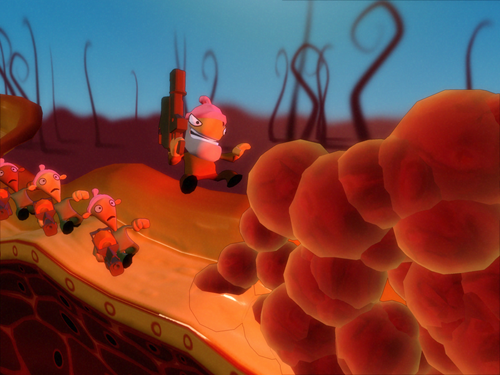 All of your games have been quite comedic in tone so far. Would you ever consider creating a more serious game?

Yeah. I like making comedy games – to the point where I think I’d find it hard not to add comedy to a game in some capacity. But there’s varying levels of comedy – BTDT/TGP and Privates were all of a type, sort of brash, crude in-your-face gags sort of game. The next thing’s shaping up to be a very different sort of comedy. I keep likening it to Grim Fandango – not in terms of tone or anything, just in that it was still funny, but a very different sort of funny to Day of the Tentacle, for example.

You are obviously a huge fan of the adventure game genre! What classic adventure titles have inspired you as a game designer?

The main influences are Sam and Max: Hit the Road, Full Throttle and Day of the Tentacle. They’re the pinnacle of the genre as far as I’m concerned. Each is a beautiful, well-layered classic.

What other indie games would you recommend to AMO’s readers?

I’m a big fan of Limbo – it’s a complete joy to play from start to finish. I’ve found it extremely inspirational. I’d also recommend Joe Danger, which is massive and beautiful and joyful.

What is next for Dan Marshall and Size Five Games?

I’ll be announcing the next project at some point soon – hopefully during the summer. It’s really exciting, but I’m not quite ready to show it off.

Thank you and GOODBYE!