GAME REVIEW – Girl with a Heart of (PC)

Girl with a Heart of is ‘an experimental interactive narrative’ from indie developer Bent Spoon Games. The player takes control of Raven, an 11 year old girl who is a member of the Dark race, a race that is constantly at war with Light’s army. Born without a heart in the Dark city of Underfoot, she only lives because John Blackbeard, a mysterious wizard with hidden motivations of his own, magically placed an artificial heart within her body. As Raven will soon discover, it is this very same heart that could be the key to finally ending the war between Light and Dark…

Girl with a Heart of, if it absolutely had to be defined by genre, would fit most comfortably alongside the traditional point-and-click adventure game. However, that isn’t to say that Girl with a Heart of is an adventure game per se. Bent Spoon Games’ label of ‘an experimental interactive narrative’ may sound slightly boorish at first, but it soon proves to be a highly apt description. The game follows Raven as she works with John Blackbeard to save Underfoot, and is made up predominately of text conversations, with the story being conveyed almost solely via the written word. Gameplay is linear and mostly sees Raven conversing with several of the inhabitants of Underfoot – there are no puzzles to speak of – and walking. There is plenty of walking in this game; too much, in fact. 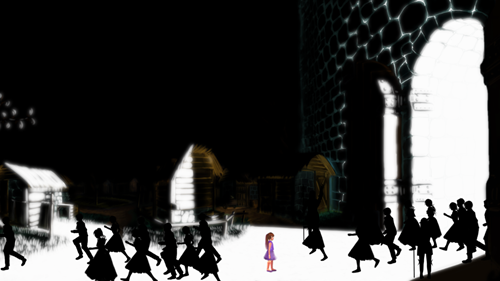 Walking is done with the A and D buttons (or the arrow keys), moving Raven from one side of the screen to the other, and the spacebar is used to interact with an exit or converse with another character. There is a visible cursor and the mouse can be used to navigate dialogue trees, but other than that there is very little pointing and clicking – or indeed interaction – to be found. Thankfully, although the large amount of walking can be rather dull (and ponderous) the graphics, despite being quite simplistic, are rather beautiful, pastel shaded and bleeding style. The music is also well implemented, yet it sadly doesn’t loop, resulting in large amounts of mood-breaking silence. The saving grace of the game is no doubt its story – the writing is consistently excellent and the narrative proves imaginative, original and, at times, moving.

In fact, the narrative is so good that it actually seems a shame that Bent Spoon Games tried so hard to shoehorn a game into the experience. There is an overly complex and mostly redundant roleplaying system whereby the player can imbue Raven’s heart with different emotions placed into crystals. However, these choices don’t seem to impact the game to any meaningful degree and the few instances of combat are ridiculously easy whatever choices you make. Likewise, the narrative seems to bend to your choices nicely, but in reality the only differences are subtle dialogue changes and the possibility of a different ending – which simply amounts to a rushed block of text describing your final outcome. it doesn’t help that this outcome can be determined solely by your actions in the preceding few scenes. The game also saves automatically so the only way to try things differently is to play from the very beginning.

Girl with a Heart of is an extremely difficult game to review. The interface is clunky and the gameplay offers a peculiar mix that never excels in any particular area, yet the graphics and music (when it chooses to play) compliment a story that is marvellously rich in history and heavily weighed with moral dilemma. The supporting characters are fantastic and it is ultimately their endearing personalities – formed by high class, novel-worthy writing – that make the game worth playing through to the end. With more substance throughout and less blunt conclusions to finish Girl with a Heart of could have been an indie classic. As it stands, it’s worth checking out for the strong writing alone, despite being merely average when everything else is taken into account. A peculiar title that is still recommendable despite numerous faults.