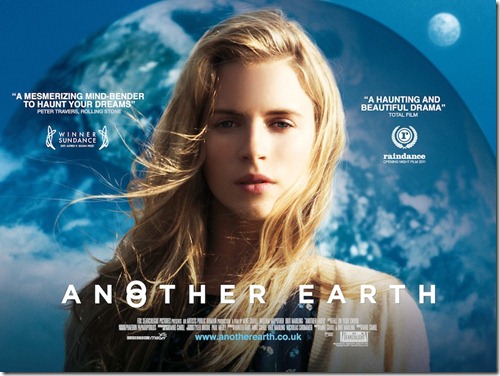 Another Earth is a science fiction/drama film directed by Mike Cahill. The film stars Brit Marling as Rhoda Williams, a high school student who has been recently accepted to MIT (Massachusetts Institute of Technology). After celebrating with friends she drink-drives home, listening to a story on the radio about an approaching planet that looks exactly like Earth. Intoxicated and distracted, she ploughs into accomplished composer John Burroughs’ car (William Mapother), putting him in a coma and killing his wife and son. After being released from prison, Rhoda crosses paths with John once again as two Earths draw slowly closer…

Another Earth is a small indie film that contains several big ideas. The special effects budget is obviously extremely tight, yet despite this limitation, the filmmakers evoke an immediate sense of awe from the moment ‘another Earth’ appears in the night sky. Later in the film when it comes even closer, hovering mysteriously over the ocean amidst clear blue skies, it looks truly stunning. It is against this awe-inspiring backdrop that Rhonda and John’s stories unfold.

Even when she is released from prison, Rhonda’s identity is not revealed to John, as she was a minor when the accident occurred. Her plans to attend MIT dashed, Rhonda takes a job at her former high school as a janitor, mopping the hallways and keeping to herself. When she tries to approach John at his home to apologise, she immediately loses her nerve, making up a story about working for a house cleaning service. Remarkably, John believes her story and invites her inside.

Since the crash, John’s life has fallen apart. As well as losing his family, he has dropped out of his teaching position at Yale and is living amidst unwashed dishes and empty beer bottles. Rhonda attempts to sneak out, but seeing John in this state makes her feel even more responsible than before. She begins to tidy and clean his house. Week after week she returns, slowly building up a relationship with John, who begins to come out of his shell after years of forced isolation. Yet Rhonda is haunted by the accident and tormented by her predicament – how can she tell John that she killed his wife and child?

Another Earth features a moving central performance by Brit Marling as Rhonda, who still manages to become an empathisable figure despite the damage she does in the very first moments of the film. This is contrasted by an equally strong performance from William Mapother as John (many will recognise him as Ethan Rom from the television series Lost; he is also a first cousin of Tom Cruise)  who plays moody and friendly with equal believability. The problem lies with the script – developments are predictable and if the science fiction elements of the film are stripped away, you are left with a plot that ultimately isn’t very remarkable in its execution.

Another Earth tackles several big themes without exploring them to completion. Ignoring the physical consequences that would actually occur if another Earth appeared next to our own (such as effects on tide, gravity and atmosphere) is ultimately acceptable because the concept itself is so visually inspired. Having a predictable drama plonked in the middle of this concept, no matter how well acted, is less forgivable. When Rhoda enters an essay contest to win a seat on a civilian space flight to the approaching mirror Earth, we already know the outcome. The thought-provoking ending kicks out against all the predictability that has come before, but sadly it comes a little too late. Another Earth could have been out of this world. Instead, it’s merely a good little indie film that entertains despite lacking substance.

One response to “FILM REVIEW – Another Earth”