Kill List is a low-budget British horror film directed by Ben Wheatley, starring Neil Maskell and Michael Smiley as a pair of contract killers who are drawn into a dark and deadly plot where nothing is as it seems. Kill List is being released on DVD and Blu-ray in the UK by Studio Canal on the 26th December, 2011.

Kill List initially presents itself as a violent thriller, before slowly transforming into a shocking horror film. Actually, that isn’t entirely true. Elements of horror permeate throughout – the film opens with a bizarre, disturbing symbol being scratched into the screen, a symbol that will show up time and time again – and there is an unshakeable feeling of dread hanging like a bloated raincloud over the picture long before anything truly horrific happens. Yet the premise of the film unavoidably points towards the thriller genre – two hitmen are given a list of people to kill for a very large sum of money, no questions asked. But there will always be questions…

Jay (Neil Maskell, Rise of the Footsoldier) is an ex-soldier, who has returned to his wife and son physically and mentally scarred after a disastrous job in Kiev. Eight months later, money is running low and his wife Shel (MyAnna Buring, The Decent) is on his back, arguments erupting between them constantly. His partner, Gal (Michael Smiley, who many viewers will remember as Tyres O’Flaherty from Spaced) adds to the pressure, trying to convince Jay to take a new assignment. Eventually giving in to his wife’s and best friend’s wishes, Jay travels with Gal to meet their client, who seals the deal in blood by unexpectedly cutting Jay’s hand with a knife.

From there, things only get stranger. Each of their victims reacts with gratitude instead of horror, as if they are aware of their fate and embrace it. Their first target, a priest, actually thanks Jay before being shot in the head. Later, Jay learns that one of their targets is an extremely bad person – we don’t see exactly why; he is referred to as ‘The Librarian’ and has videos contained in a lock-up that are undoubtedly sickening, whatever they show – yet said target, when faced with death-by-hammer, simply tells Jay that he’s glad to have met him. This is a turning point for Jay: he is obviously suffering from post traumatic stress – what exactly happened in Kiev, we’re never told – and professionalism goes out of the window. Jay transforms from professional hitman to uncontrollable psychopath.

I have been deliberately vague about the true plot of Kill List. Likewise, the filmmakers themselves seem to enjoy evoking questions more than they do giving answers. Not that this is entirely a bad thing. Emma Fryer as Fiona, Gal’s potential girlfriend, is ultra-creepy from her very first appearance during a meal at Jay’s house near the beginning, and becomes even more so when she takes down a mirror in the bathroom and carves a strange symbol into the back of it with a knife. This is a horror film that evokes comparison with classic British horror films of the 1970s such as The Wicker Man. Those viewing the film having read no reviews or publicity material will undoubtedly be hit the hardest.

Kill List is an extremely well acted British horror film, featuring superb main performances from both Neil Maskell and Michael Smiley. Smiley in particular is fantastic, offering light comic relief in a film with few laughs without ruining the intended mood. The relationship between the two hitmen is fascinating: they’re as close as brothers, yet so used to violence that smashing a mug over somebody’s head during a disagreement is obviously considered a valid form of response. Jay and Gal terrify long before the film switches to all-out horror. The many unanswered questions and the totally unexpected ending will no doubt frustrate as many viewers as they please. Yet ultimately, despite being an extremely unpleasant watch at times, Kill List remains fascinating, scary and original throughout. This will become a cult classic, mark my words. 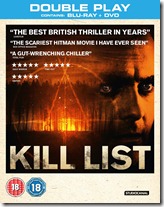