Edna & Harvey: The Breakout is a point-and-click adventure game created by Daedalic Entertainment. Hand drawn in a unique cartoon style, the story follows insane asylum prisoner Edna, along with her stuffed toy rabbit Harvey, as they attempt to escape their involuntary confinement. Originally released in Germany, the English language version was released by Lace Mamba Global on the 21st January 2011.

The storyline of Edna & Harvey is certainly an interesting one. The game begins with protagonist Edna trapped in a padded cell. Although she has no memory of how she got there, she is certain that she is entirely sane. What’s more, her talking stuffed toy rabbit agrees with her… often verbally. Therefore, she decides to escape. The opening cutscene – with Edna having a decidedly crazy dream involving a boat – sets the tone perfectly: although initially helping Edna and Harvey break out of their cell can feel slightly bizarre, there are soon enough clues dropped to pique the player’s interest and encourage them to continue onwards.

It soon transpires that the sinister head of the institute, Dr Marcel, has ulterior motives for keeping Edna incarcerated. Before long Edna and Harvey, with the player’s help, manage to exit their cell. However, this is only the very beginning of the titular ‘breakout’. The player must now explore the asylum at large, visiting its numerous locations and conversing with its wide array of delusional inmates. A man in a bee costume and Siamese twins of different ethnic origins should give you some idea of the type of characters that you will come across throughout this adventure. Whilst some may take offense to the game’s comical take on the mentally ill, it just about gets away with it due to its light-hearted approach and bright demeanour. 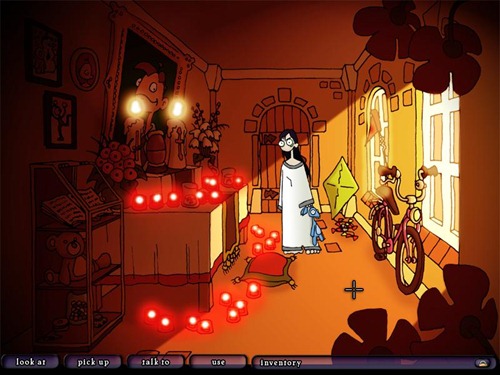 The asylum itself can feel slightly overwhelming at first, with the game largely following a non-linear approach where puzzles can be solved in any order. To counteract this feeling of being overwhelmed, certain areas of the asylum only open up after continued play. Regardless, the amount of freedom, combined with a rapidly expanding inventory full of items and an old-school verb-based interface, sees the difficulty skyrocket at a somewhat alarming rate.

Thankfully, although quite difficult when compared to most other modern adventure games – and even some of the more challenging classic adventure games of the past – Edna & Harvey largely succeeds due to the well-defined personalities of its two heroes. Edna has a unique response for everything the player can possibly think of interacting with, and Harvey often pipes up to offer his own opinion too. The end result is hilarious: although you may not always know what to do next, finding out can still be a hell of a lot of fun.

Somewhat surprisingly, there are also several more emotional moments sprinkled throughout the story, especially when Edna recalls her memories of being a child to relearn a skill she can apply to her current situation. Sadly, this mechanic is all but squandered: it only happens a handful of times and the change of interface for these sequences is unnecessarily complex – even if the music that plays during them is exquisitely, hauntingly beautiful. Still, these moments do make a nice change of pace from the zany goings-on of the main game.

Unfortunately, the ending of the game decides to take a huge risk by going for a much darker tone. Although this risk doesn’t entirely fail, it doesn’t entirely succeed either: both of the possible endings feel rushed and neither feels particularly satisfying or true to prior events. This is a shame, as despite Edna & Harvey’s annoyances, it does have plenty of charm and a likeable cast of characters. The story just fizzes out in the end, which is disappointing as it seems to promise so much more.

I initially had some problems getting Edna & Harvey to run, although updating Flash (as recommended by Lace Mamba Global) seemed to solve this issue. However, it must be noted that the game engine isn’t especially well optimised: loading and saving both result in painful load times (the type where you worry the PC has frozen) and even traversing between locations results in a small pause while the next screen loads. With its large amount of locations, Edna & Harvey was crying out for a transporting map feature, but instead players have to suffer through plenty of clicking to get from A to B.

The English translation has been very well handled. Although not every word is perfect – there is the occasional stilted sentence or botched description – 99% of the jokes have remained intact. It must be remembered that there is a lot of dialogue in this game, so some mistakes were bound to slip through. Furthermore, the English voice acting is largely a success. The secondary characters are only passable, but Edna and Harvey are voiced to perfection. I was constantly impressed throughout by the performances of the actors playing these two characters. I can even openly admit to laughing out loud a few times at their lines because they were so well delivered!

Edna & Harvey: The Breakout is an adventure game in the classic mould. As a result, it admittedly shares much in common with many of the genre’s past triumphs, but also falters somewhat by replicating their trappings in a modern gaming world. The difficulty will come as a shock to many and the puzzle solutions are not always as fair as they should be. This contemporary adventure game feels in many ways like a blast from the past.

Still, I truly enjoyed Edna & Harvey despite its faults. Whereas some may find the graphics slightly rough around the edges – as well as the overall experience – I thought this all added to its charm. The characters of Edna and Harvey always made me smile and spending so much time with them was a blast. Buy this for the epic escape itself, not the relatively disappointing ending. This is a fun, quirky adventure game, even with its annoyances taken into account.

The Edna & Harvey: The Breakout – Collector’s Edition includes the official game soundtrack on a music CD and an A2 artwork poster.