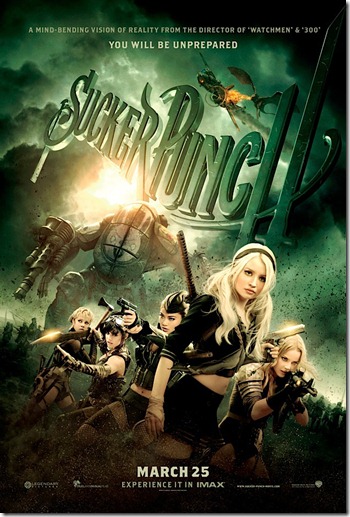 Zack Snyder gained notoriety back in 2007 with his testosterone-fuelled epic 300, while 2009 saw his big-screen adaptation of comic book Watchmen. This year, Snyder works with the female of the species in Sucker Punch, starring a predominantly female cast headlined by Emily Browning (Lemony Snicket’s A Series of Unfortunate Events and The Uninvited). Has Snyder delivered his audience the promised ‘sucker punch’ with this latest offering?

The film follows protagonist Babydoll (Browning), whose real name we never learn, as she is institutionalised by her abusive stepfather following the deaths of her mother and sister. It becomes clear that her stepfather has no intention of allowing her to return to the outside world in one piece, as he bribes an orderly (Oscar Isaac) to forge the psychiatrist’s (Carla Gugino) signature on a document recommending a lobotomy. The trauma proves to be too much for Babydoll, who retreats to a fantasy world in which she and the other inmates of the unit are dancers in a brothel.

In this fantasy, the orderly becomes a mobster named Blue, and the psychiatrist is envisioned as the elegant dance instructor Madame Gorski. Babydoll befriends four other dancers, Sweet Pea (Abbie Cornish), Rocket (Jena Malone), Blondie (Vanessa Hudgens) and Amber (Jamie Chung) and convinces them to join her in an attempted escape plot, which requires the other girls to steal four key items to secure their freedom. They use Babydoll’s dancing as a distraction, but it is a distraction the audience never sees; as Babydoll dances, she images that she and her friends are part of an elite fighting troupe led by a figure known as the Wise Man (Scott Glenn), leading to action-packed sequences showing the girls fighting for their lives.

The key problem with Sucker Punch is that it tries too hard to be clever and ‘deep’, when in reality it’s incredibly shallow. The layering of fantasy worlds seemed to me as though Snyder was attempting an Inception-style take on dreams, except the whole fantasy-within-a-fantasy motif in Sucker Punch is clumsy and pointless. In fact, I’d go as far as saying that the entire concept of Sucker Punch would work better as a video game than as a feature length film. The various action based sequences interspersed throughout the film felt just like sections of a video game, especially with the ‘four items’ plot point.

Furthermore, the pseudo-female empowerment evident throughout the film really did not settle well with me. I’m not entirely sure Snyder was clear as to who his audience was; I’m sure pubescent boys are just going to love the underwear-flashing fight scenes, but Snyder’s treatment of female escape from sexual assault via erotic dancing is blatantly and irritatingly problematic. I’m an absolute sucker for tough, female characters, especially when they can crack out some quality martial arts, but despite the ‘tough’ title, Sucker Punch really didn’t deliver in this sense. The director clearly abided to the unwritten rule of Hollywood which states that ‘female empowerment’ comes hand in hand with teeny-tiny skirts and cleavage galore.

That said, the film had some saving graces; the soundtrack is utterly fantastic, as it should be, considering the importance music plays to the plot. The music worked well with the situations displayed onscreen, with haunting versions of the Eurythmics’ ‘Sweet Dreams’ and The Pixies’ ‘Where is my Mind’ working well to add to the macabre dreariness of Babydoll’s reality, and the action is backed suitably by a thumping bass. The stunning visuals are also a credit to Snyder; I can guarantee you won’t be bored during the arresting action segues.

In terms of performances, some were better than others, but overall, everything was somewhat overplayed and just plain hammy. I didn’t find Isaac’s Blue threatening in the slightest, and Browning’s performance was just plain boring. I was disappointed to see Jon Hamm (Mad Men) sorely underused as the lobotomist/High Roller; but apparently a few of his scenes were cut, pretty much leaving him with an extended cameo. On top of this, for a film which promises to “sucker punch” its audience, the ending was painfully predictable.

According to its director, all the core elements of the film are supposedly “delivered to the audience in the form of a Sucker Punch”. Unfortunately, I don’t quite agree. Sure, it has a nice soundtrack and some pretty visuals but ultimately, Sucker Punch just tries too hard to deliver a knockout.