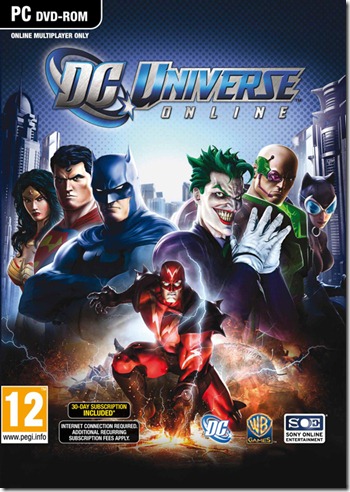 Like his proverbial namesake catching the morning worm, The Chaffinch swoops down from the rooftops to tackle the nameless thugs of Gotham City. Dishing out punches, kicks and batarangs, his retribution is swift. Answering a call from his mentor Batman, he heads to another crime scene round the block. Identical looking thugs meet the same justice. Another call comes in, twenty more of the same reprobates line the streets. DC Universe Online reads a familiar story. Fantastic license, terrible execution.

An impressive opening cinematic details the sudden influx of meta-humans, neatly tying into a limited character creator. The selection of a mentor, weapons and powers precedes a period of arbitrarily clicking through a selection of spandex and capes, trying in vain to make something suitably heroic/villainous. You do unlock more exotic styles as you play, although inexplicably they aren’t unlocked for future characters. Failing that, The Hulk is easy to create.

Your choice of mentor affects your experience of the world.

Apparently. The Chaffinch, my pitiful Robin rip-off in a Batman colour scheme naturally chose ‘The Dark Knight’ as his mentor. Considering my tutor is the ‘World’s Greatest Detective’, I’d be forgiven for thinking my questing would involve stalking the shadows and gathering clues in preparation for the takedown, like Dexter in a costume. Instead, the murdering of evil-doers and the pressing of ‘E’ to lift up objects that my puny hero had no right to pick up was the order of the day, with these objectives repeated mercilessly up to the level cap of 30. You might be tasked with helping a trapped civilian or disarming a bomb, but the crux of the gameplay remains the same, and pressing ‘E’ thousands of times doesn’t feel particularly heroic.

Flying, bouncing or running around either Gotham or Metropolis is a pleasant experience. Both are well realised, and look terrific even when running on a modest system. Incidental touches such as the Bat Signal bouncing off the clouds do well to warm the cockles to even the most critical comic book fan, although typically for a game that wasn’t made by Rockstar, both are devoid of any hustle and bustle with only a few civilians roaming the streets on their set patterns. Audio is handled well, with Mark Hamill and Kevin Conroy unsurprisingly superb as The Joker and Batman, although some are less pleasing to the ear drums. Booster Gold I’m looking at you.

Combat is largely a success. Powers are activated by key bindings, whilst weapon combinations are assigned to frantic mouse clicking. It looks great, with devastating looking combos no more than a few clicks away. Assuming you are playing on a mouse and keyboard (a gamepad absolutely refusing to work for me) it can become tricky. Trying to aim, use powers, hammer out combinations and manoeuvre within a few seconds is quite a strain on the digits, especially when tackling the alert zones.

The alert zones are typically known as dungeons or instances in other MMOs. A small group of players are transported to a zone, tucked away behind a loading screen and away from interference from the rest of the player base, to tackle challenging groups of enemies and bosses in exchange for increasingly powerful upgrades to their armour and weapons. 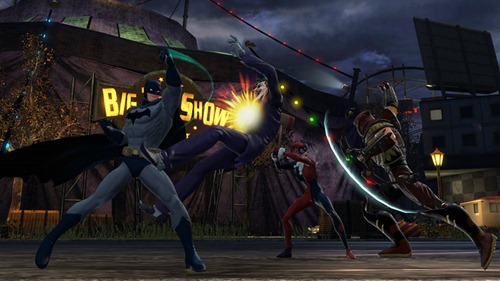 The solo instances are designed for players of an appropriate level to make the most out of their combat abilities, regularly offering a decent challenge. They all follow the same pattern however, defeating a large number of enemies before tackling the boss at the end and being treated to a Jim Lee illustrated cut-scene before going through the process again, albeit with a different colour scheme. Group instances offer perhaps the only guaranteed opportunity to engage with other players, but tactics and coordination fall by the wayside as it’s quicker to bundle through the objectives and boss fights by spamming your powers and abilities than try to communicate.

This utter lack of player interaction continues out in the open world. Chat channels briefly whip up conversation, only for it to briefly peter out within seconds. During one evening’s play during prime time hours, I counted a gargantuan total of three other players questing in Metropolis. Bizarrely, Sony Entertainment Online have seen fit to dilute the player base further by opening up even more servers, rather than consolidating the existing ones.

Staple for an MMO, talent trees allow you to tinker you character as you see fit. Picking acrobatics for travel can see you adapt to swing through the city like Spiderman (sacrilege in a DC review!), or attach your costume with rockets and fly everywhere. Powers similarly offer the same treatment, The Chaffinch ending up relying on gadgets and turrets to inflict pain, rather than head down a stealthier route and attack from the shadows.

Considering its incredible license and relative infancy, there is a real scope to make DC Universe Online a viable, relevant and successful MMO. It looks fantastic, and the combat can be fun (it’s important to remember this is a review on the PC using a mouse and keyboard, not with a gamepad) but criminally for a massively multiplayer game, it can often be a lonely experience. The PS3 version one assumes also suffers, selling well initially but slowing down to a crawl after a few months, an affliction that seems to befall most ambitious MMO releases.

Like Turbine has demonstrated with Lord of the Rings Online and Dungeons & Dragons Online, moving to a free-to-play payment model (no monthly fees, the game is instead supported with micro-transactions such as new quests and armour for a small price) is perhaps the only way to guarantee survival for an MMO that isn’t made by Blizzard. A monthly fee of £8.99 is unjustified considering the content, and in terms of population and player interaction you may as well find a superior single player game and just lob the equivalent subscription price out of the window every month.

If DC Universe Online makes the transition to a free-to-play model, expect player numbers to sky-rocket. For the time being, avoid it like Clark Kent does kryptonite cutlery.